As an open, permissionless network, anyone may choose to operate an Oracle providing data to smart contracts running on Moonbeam.

This article provides an overview in regards to setting up a Chainlink Oracle on Moonbase Alpha.

The examples provided are for demonstration purposes only. Passwords MUST be managed securely and never stored in plaintext. These examples assume an Ubuntu 18.04-based environment, but call-outs for MacOs are included. This guide is for a development setup only, do not use this for a production environment.

Before we go dive into how to get started, it is important to understand the basics of the "basic request model."

An Oracle node has a set of job IDs, where each corresponds to a task that can be requested by a user, for example, fetch a price feed. To do so, the user needs to send a request through a contract, we'll name it the Client contract, passing in the following information:

This request actually sends a transferAndCall to the LINK token contract, which handles the payment and relays the request to the Oracle contract. Here, an event is emited with the request, which is picked up by the Oracle node. Next, the node fetches the necessary data and executes the fulfilOracleRequest function, which executes a callback that stores the requested information in the Client contract. The following diagram explains this workflow.

If you are familiar with running Chainlink Oracle nodes, this information will get you started on the Moonbase Alpha TestNet quickly:

This guide will walk through the process of setting up the Oracle node, summarized as:

The basic requirements are:

First, let's create a new directory to place all the necessary files. For example:

Next, lets create a Postgres DB with Docker. To do so, execute the following command (MacOs users may replace --network host \ with -p 5432:5432):

Make sure to replace {YOU_PASSWORD_HERE} with an actual password.

Reminder, do not store any production passwords in a plaintext file. The examples provided are for demonstration purposes only.

Docker will proceed to download the necessary images if they are not available. Now, we need to create an environment file for Chainlink in the newly-created directory. This file is read on the creation of the Chainlink container. MacOs users may replace localhost with host.docker.internal.

Here, besides the password ({YOUR_PASSWORD_HERE}), we need to provide the Link token contract ({LINK TOKEN CONTRACT ADDRESS}). After we've created the environment file, we also need an .api file that stores the user and password used to access the node's API, the node's operator UI,and the Chainlink command line.

Set both an email address and another password. Lastly, we need another file that stores the wallet password for the node's address:

Now that we have finished creating all necessary files, we can launch the containers with the following command (MacOs users may replace --network host \ with -p 6688:6688):

To verify everything is running and that the logs are progressing use: 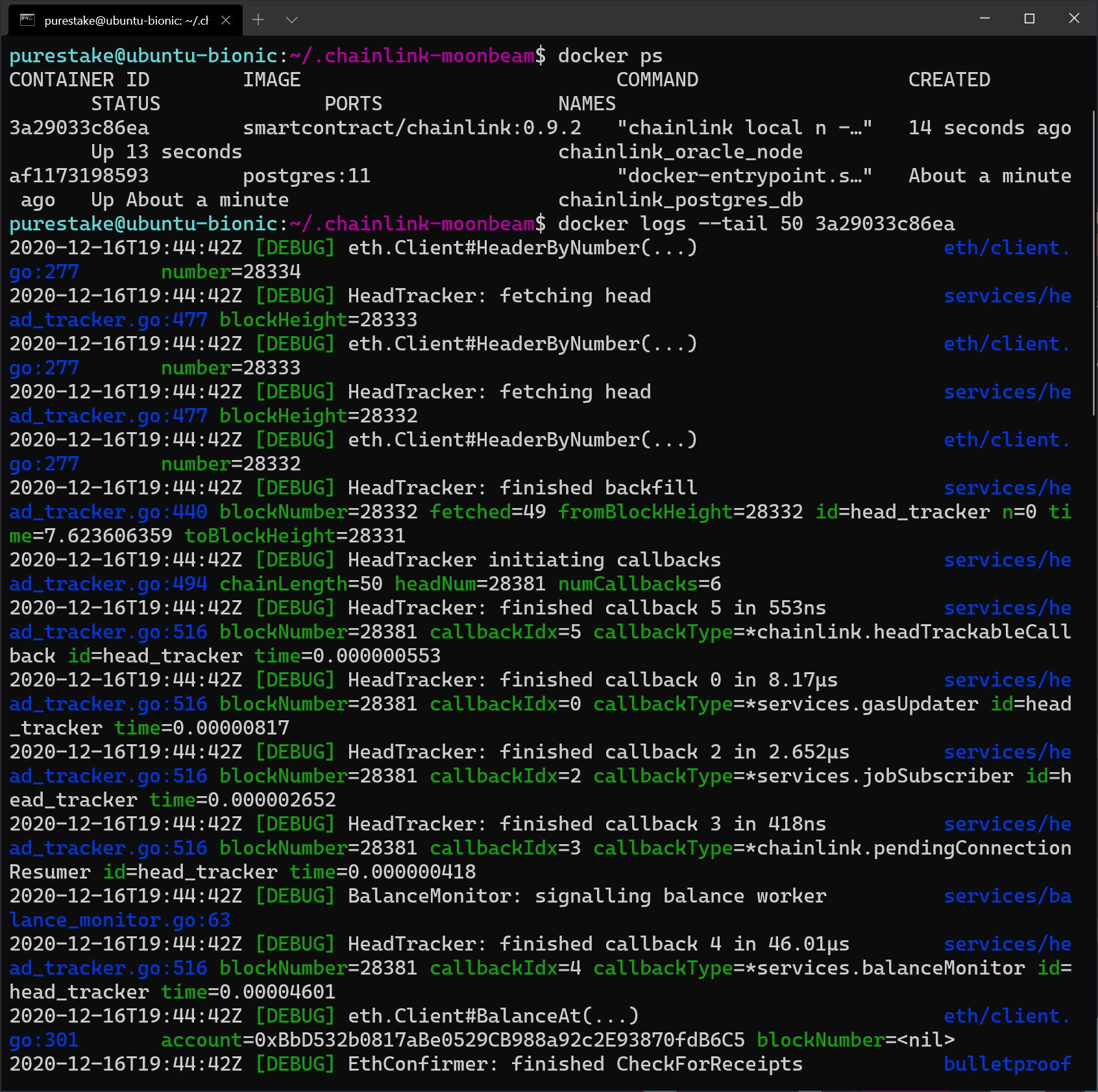 With the Oracle node running, let's configure the smart contract side of things. 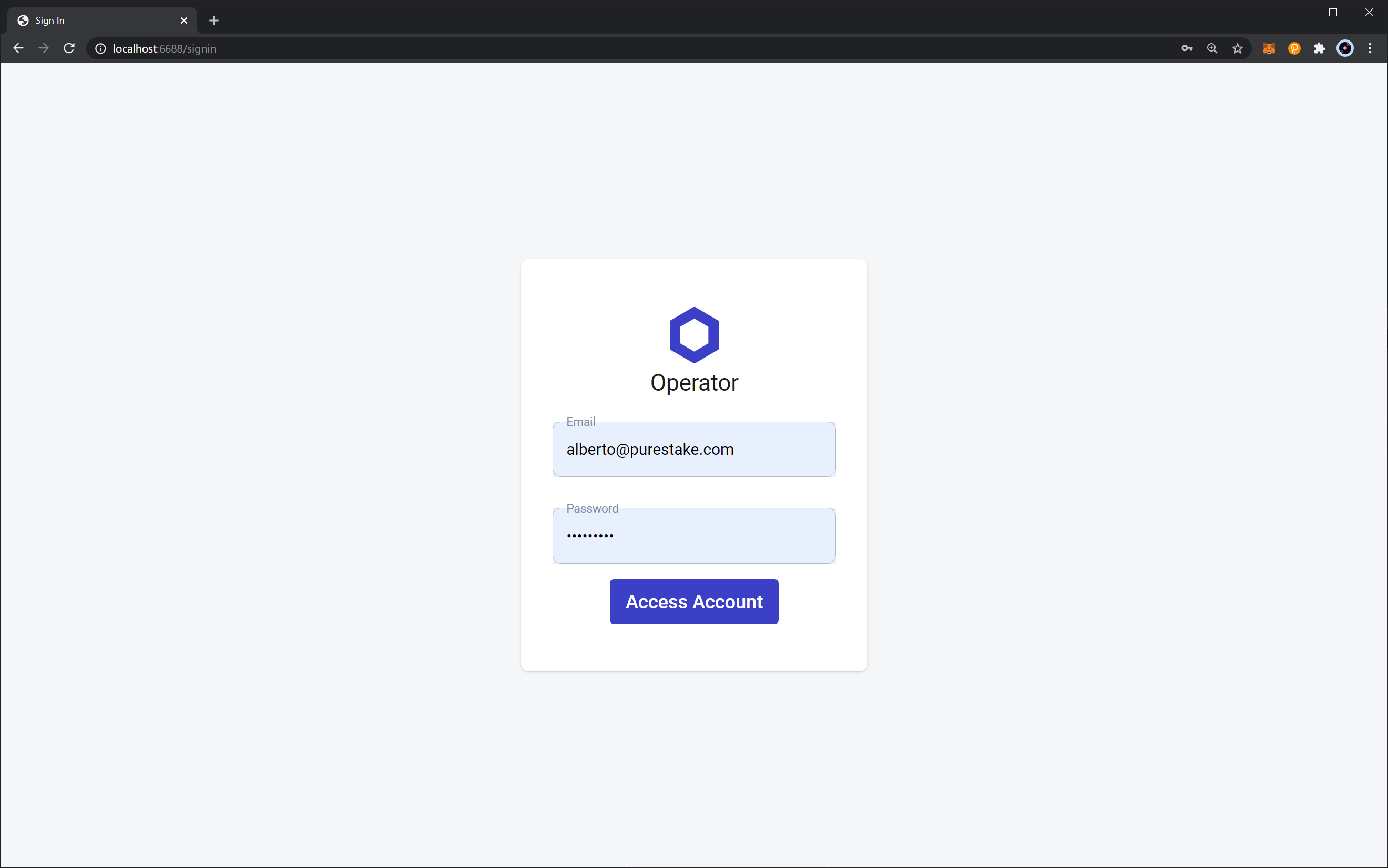 Go to the 'Configuration Page` and copy the node address. Use the Moonbeam Faucet to fund it. 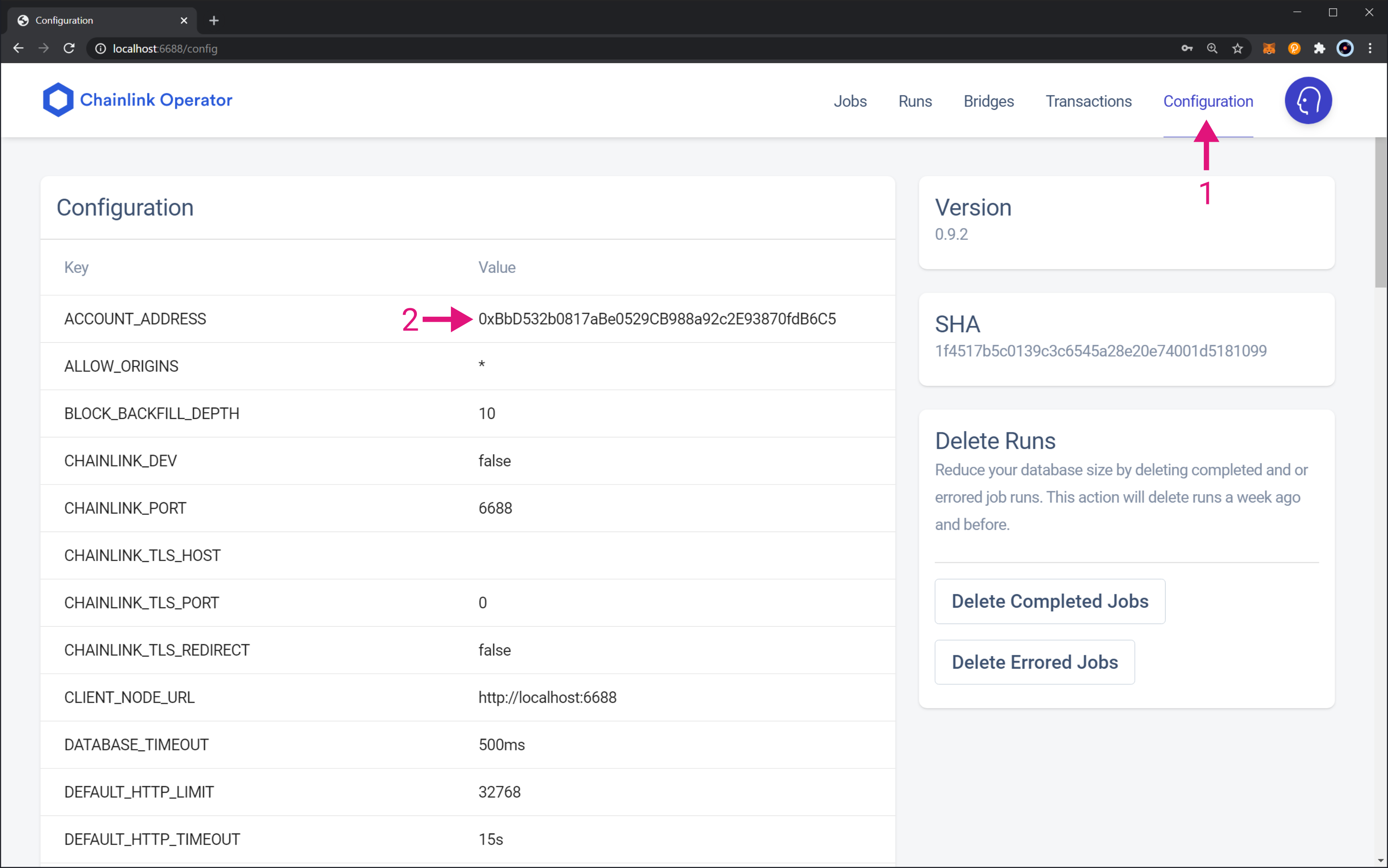 Next, we need to deploy the Oracle contract, which is the middleware between the chain and the node. The contract emits an event with all the necessary information, which is read by the Oracle node. Then, the node fulfills the request and writes the requested data in the caller's contract.

The source code of the Oracle contract can be found in Chainlink's official GitHub repository here. For this example, we'll use Remix to interact with Moonbase Alpha and deploy the contract. In Remix, we can copy the following code:

After compiling the contract, head to the "Deploy and Run Transactions" tab, enter the Link token address and deploy the contract. Once deployed, copy the address of the contract. 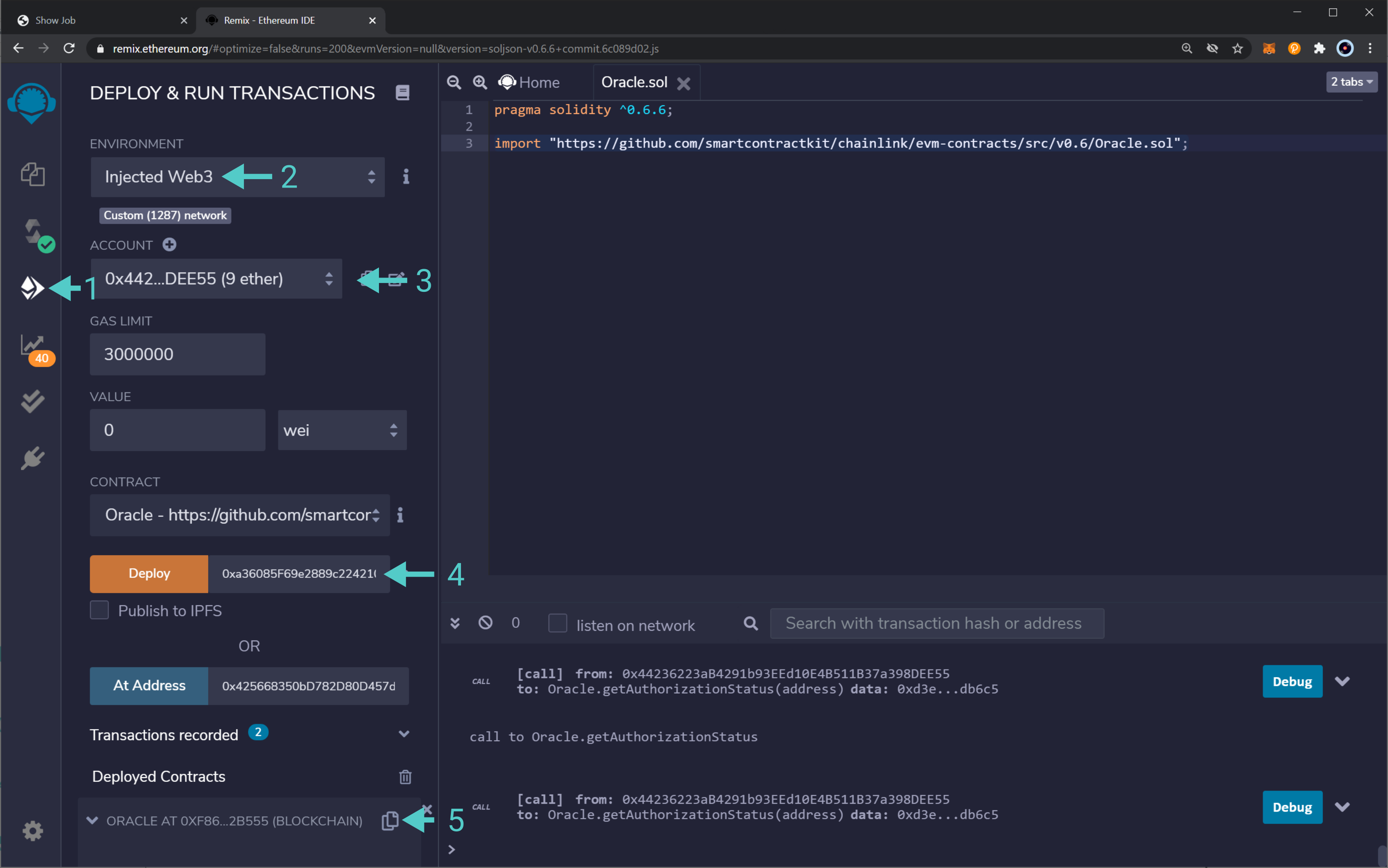 Lastly, we have to bond the Oracle node and the Oracle smart contract. A node can listen to the requests sent to a certain Oracle contract, but only authorized (aka. bonded) nodes can fulfill the request with a result.

To set this authorization, we can use the function setFulfillmentPermission() from the Oracle contract. This needs two parameters:

We can use the instance of the contract deployed on Remix to do so, and check the Oracle node is authorized with the view function getAuthorizationStatus(), passing in the Oracle node address. 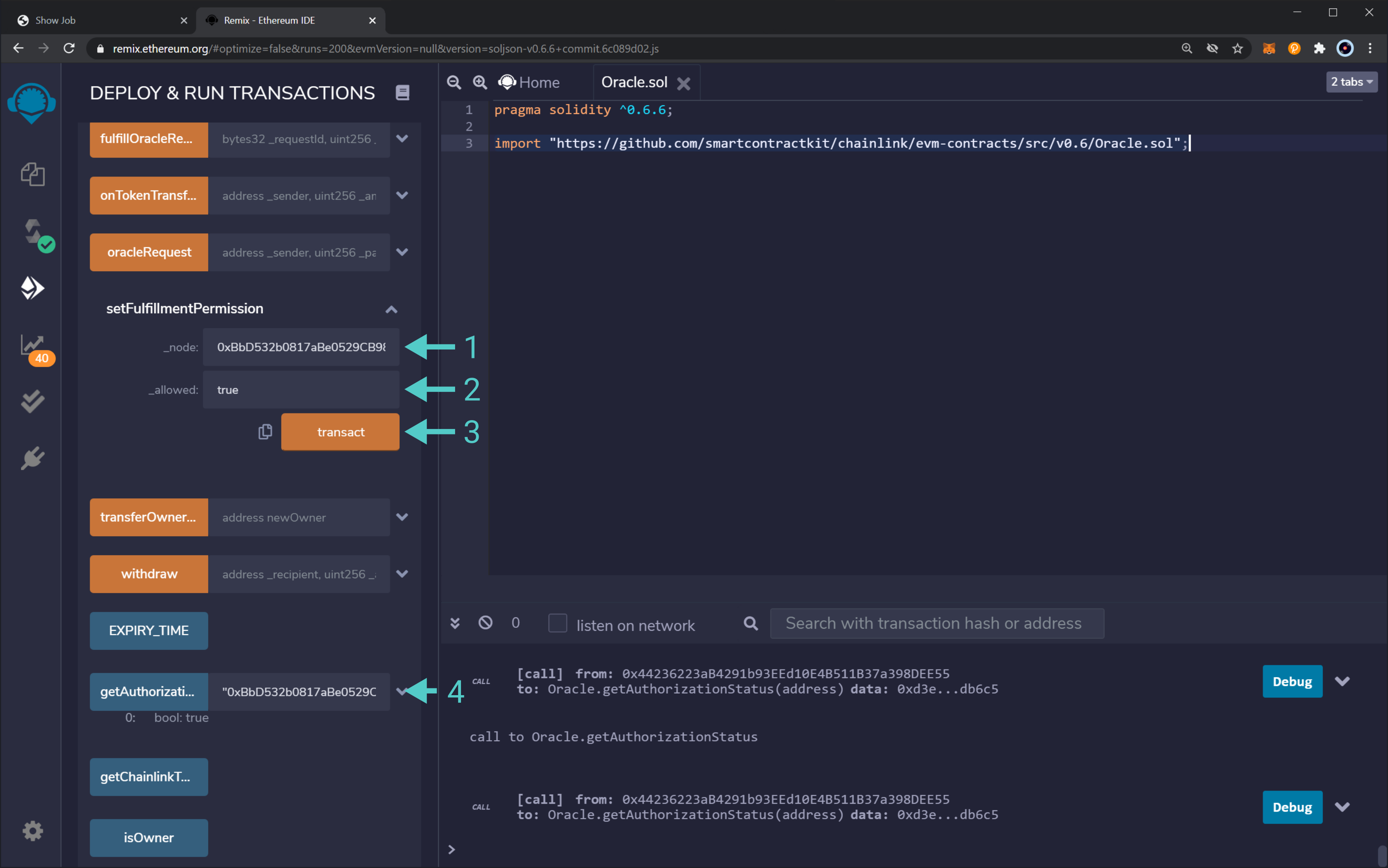 Create Job on the Oracle node¶

The last step to have a fully configured Chainlink Oracle is to create a Job. Referring to Chainlink’s official documentation:

A Job specifications, or specs, contain the sequential tasks that the node must perform to produce a final result. A spec contains at least one initiator and one task, which are discussed in detail below. Specs are defined using standard JSON so that they are human-readable and can be easily parsed by the Chainlink node.

Seeing an Oracle as an API service, a Job here would be one of the functions that we can call and that will return a result. To create our first Job, go to the Jobs sections of your node and click on "New Job."

Next, paste the following JSON. This will create a Job that will request the current ETH price in USD. Make sure you enter your Oracle contract address (YOUR_ORACLE_CONTRACT_ADDRESS).

And that is it! You have fully set up a Chainlink Oracle node that is running on Moonbase Alpha.

To verify the Oracle is up and answering requests, follow our using an Oracle tutorial. The main idea is to deploy a client contract that requests to the Oracle, and the Oracle writes the requested data into the contract's storage.