Geth's debug and txpool APIs and OpenEthereum's trace module provide non-standard RPC methods for getting a deeper insight into transaction processing. As part of Moonbeam's goal of providing a seamless Ethereum experience for developers, there is support for some of these non-standard RPC methods. Supporting these RPC methods is an important milestone because many projects, such as The Graph or Blockscout, rely on them to index blockchain data.

To use the supported RPC methods, you need to run a tracing node, which is slightly different than running a full node. There is a different Docker image, called purestake/moonbeam-tracing that needs to be used for tracing. Additional flags will also need to be used to tell the node which of the non-standard features to support.

This guide will show you how to get started running a tracing node on Moonbeam with the debug, txpool, and tracing flags enabled.

Similarly to running a regular node, you can spin up a tracing node using Docker or Systemd. If you choose to use Docker, you must install Docker if you haven't already. At the time of writing, the Docker version used was 19.03.6.

Spinning up a debug, txpool, or tracing node is similar to running a full node. However, there are some additional flags that you may want to enable specific tracing features:

If you want to run an RPC endpoint, to connect to Polkadot.js Apps, or to run your own application, use the flags --unsafe-rpc-external and/or --unsafe-ws-external to run the full node with external access to the RPC ports. More details are available by running moonbeam --help.

Run a Tracing Node with Docker¶

If you haven't previously run a standard full Moonbeam node, you will need to setup a directory to store chain data:

Before getting started, you'll need to set the necessary permissions either for a specific or current user (replace DOCKER_USER for the actual user that will run the docker command):

Now, execute the docker run command. Note that you have to:

The complete command for running a tracing node is as follows:

You should see a terminal log similar to the following if you spun up a Moonbase Alpha tracing node: 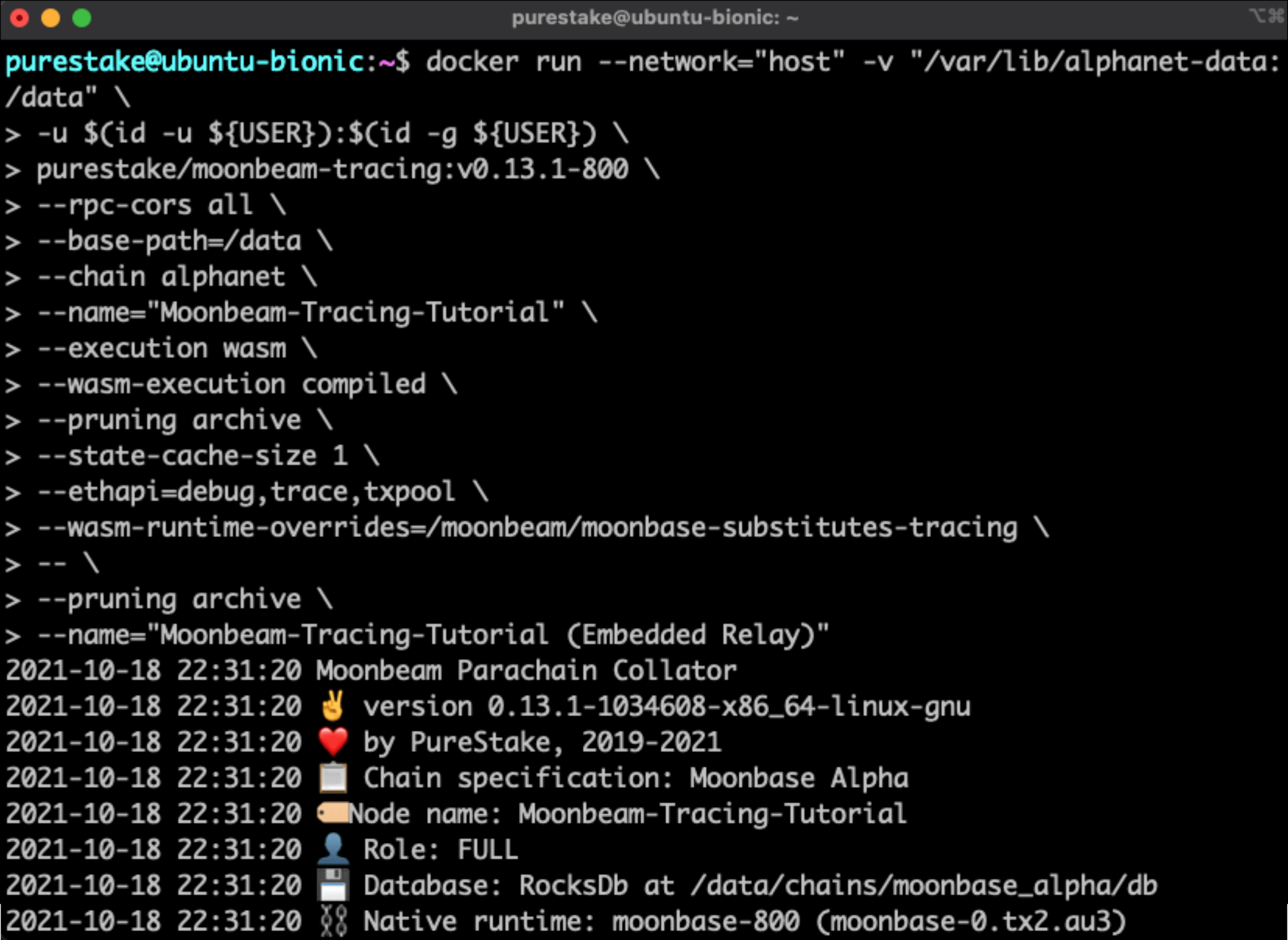 Run a Tracing Node with Systemd¶

Once you've finished going through the instructions in those specific sections, you can continue on to the below instructions.

You'll need to create a directory for the Wasm runtime overrides and obtain them from the Moonbeam Runtime Overrides repository on GitHub.

You can clone the repository to any location on your local machine. For simplicity, you can use the directory where you're storing on-chain data. To set up the Wasm override files, you can take the following steps:

The next step is to create the systemd configuration file, you'll need to:

If you want to run an RPC endpoint, to connect polkadot.js.org, or to run your own application, use the flags --unsafe-rpc-external and/or --unsafe-ws-external to run the full node with external access to the RPC ports. More details are available by running moonbeam --help.

Almost there! Register and start the service by running:

And lastly, verify the service is running: 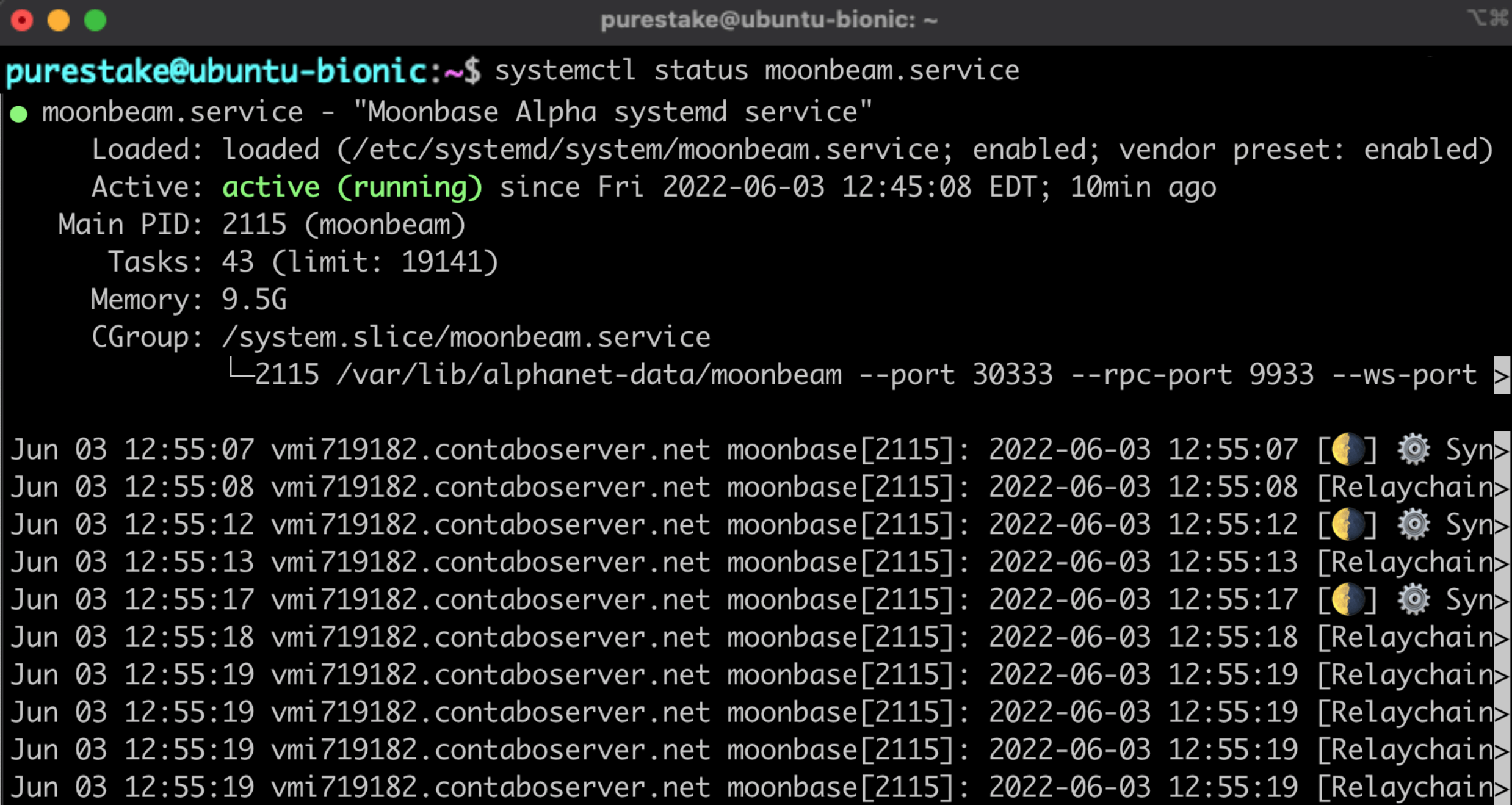 You can also run the following command to see logs of the tracing node spinning up:

Your terminal should display logs similar to the following: 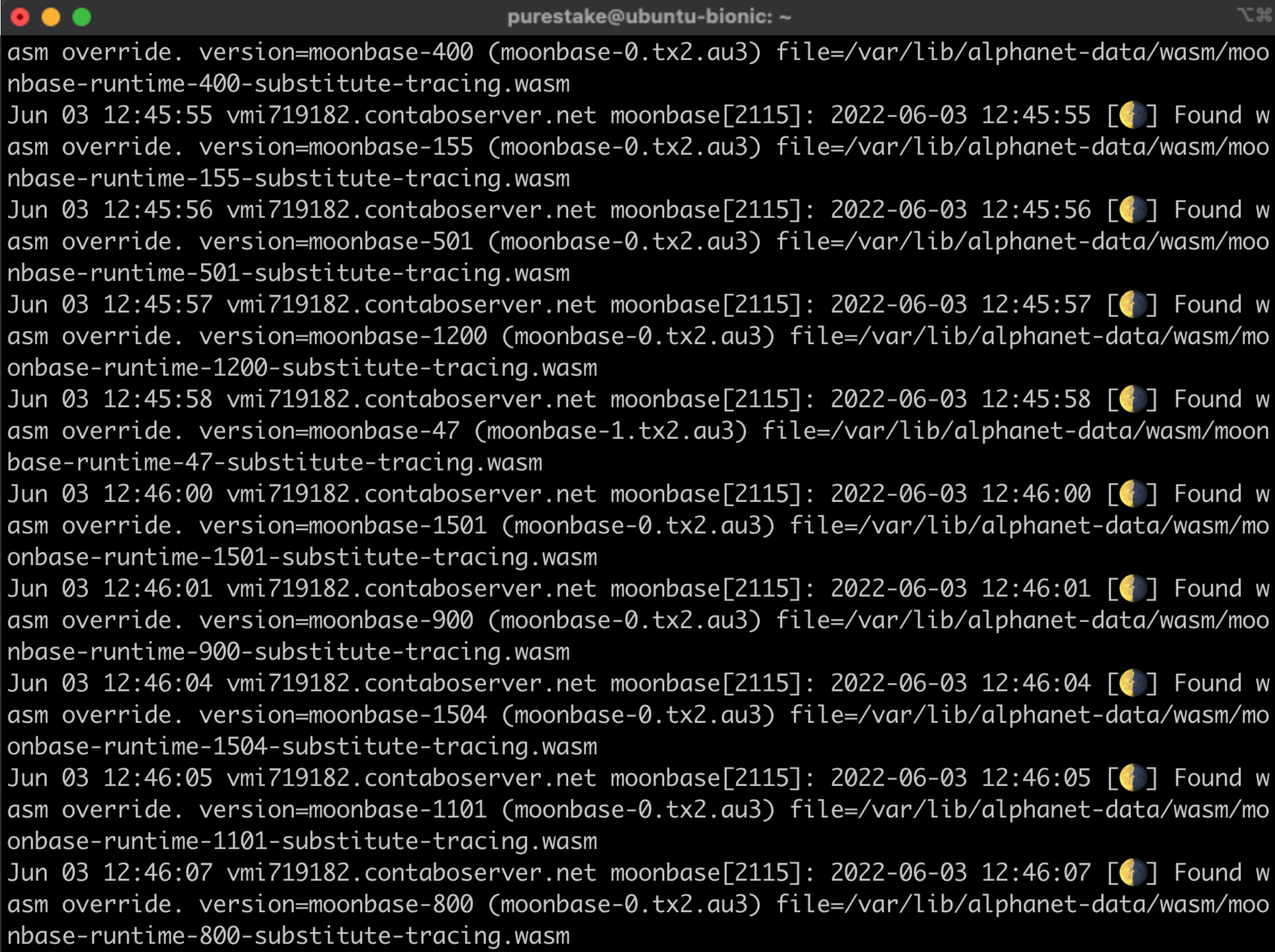 To explore the different non-standard RPC methods available on Moonbeam, and how to use these methods with a tracing node, check out the Debug & Trace guide.