Running a full node on a Moonbeam-based network allows you to connect to the network, sync with a bootnode, obtain local access to RPC endpoints, author blocks on the parachain, and more.

This guide is meant for people with experience compiling Substrate based blockchain nodes. A parachain node is similar to a typical Substrate node, but there are some differences. A Substrate parachain node will be a bigger build because it contains code to run the parachain itself, as well as code to sync the relay chain, and facilitate communication between the two. As such, this build is quite large and may take over 30 min and require 32GB of memory.

Moonbase Alpha is still considered an Alphanet, and as such will not have 100% uptime. The parachain might be purged as needed. During the development of your application, make sure you implement a method to redeploy your contracts and accounts to a fresh parachain quickly. If a chain purge is required, it will be announced via our Discord channel at least 24 hours in advance.

The following sections go through the process of using the binary and running a Moonbeam full node as a systemd service. The following steps were tested on an Ubuntu 18.04 installation. Moonbeam may work with other Linux flavors, but Ubuntu is currently the only tested version.

To get started quickly without the hassle of compiling the binary yourself, you can use The Release Binary. Or if you prefer to manually build the binaries yourself, which could take around 30 minutes to install the dependencies and compile, you can check out the Compile the Binary section.

To get started use wget to grab the latest release binary:

To verify that you have downloaded the correct version, you can run sha256sum moonbeam in your terminal, you should receive the following output:

Once you've retrieved the binary, you can skip ahead to the Running the Systemd Service section to get started running your node.

Manually compiling the binary can take around 30 minutes and requires 32GB of memory.

The following commands will build the latest release of the Moonbeam parachain. 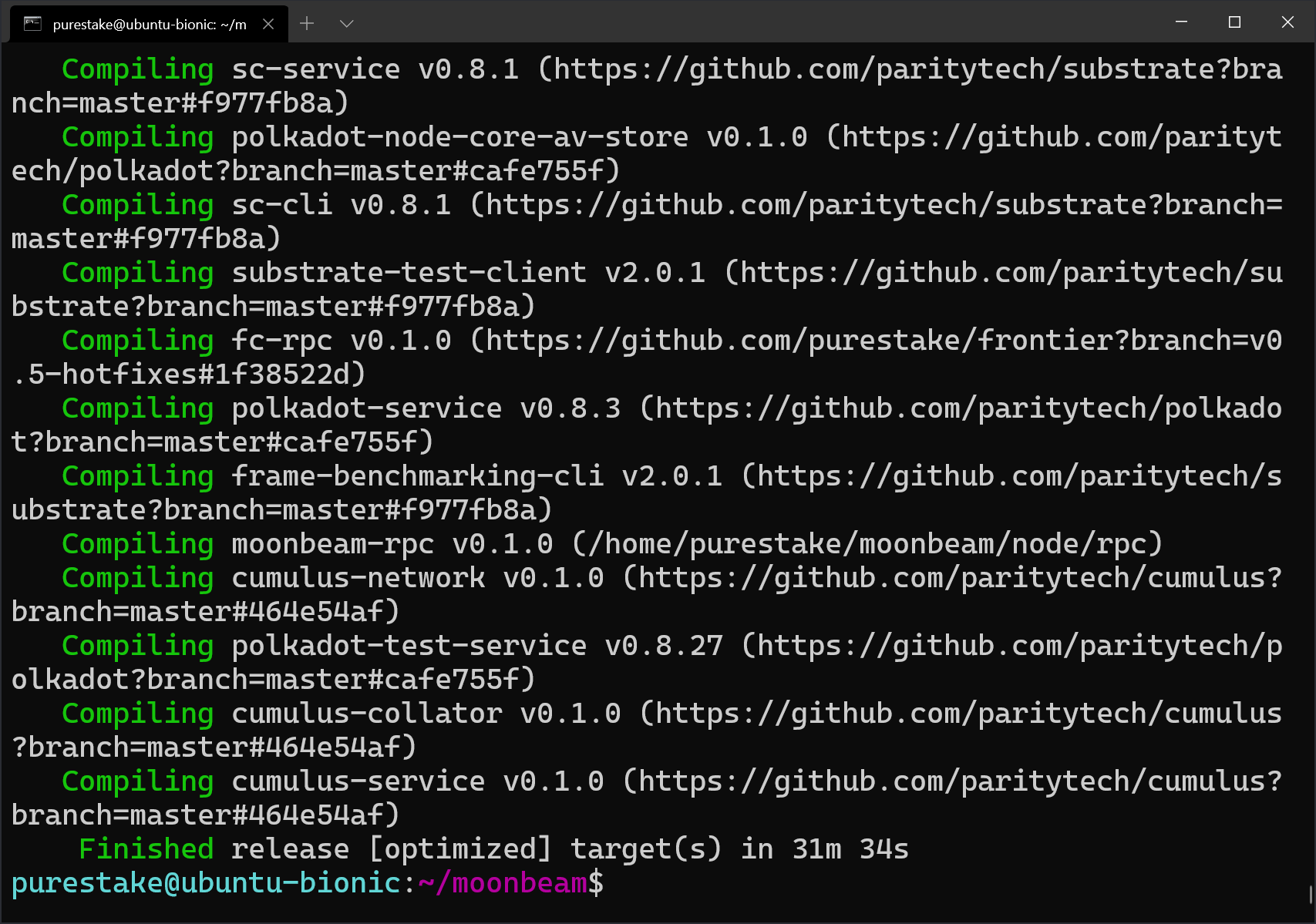 If a cargo not found error shows up in the terminal, manually add Rust to your system path or restart your system:

Now you can use the Moonbeam binary to run a systemd service.

The following commands will set up everything regarding running the service.

The next step is to create the systemd configuration file. If you are setting up a collator node, make sure to follow the code snippets for Collator. Note that you have to:

If you want to run an RPC endpoint, to connect Polkadot.js Apps, or to run your own application, use the flags --unsafe-rpc-external and/or --unsafe-ws-external to run the full node with external access to the RPC ports. More details are available by running moonbeam --help. This is not recommended for Collators. For an overview of the available flags, please refer to the Flags page of our documentation.

You can specify a custom Prometheus port with the --prometheus-port XXXX flag (replacing XXXX with the actual port number). This is possible for both the parachain and embedded relay chain.

Almost there! Register and start the service by running:

And lastly, verify the service is running: 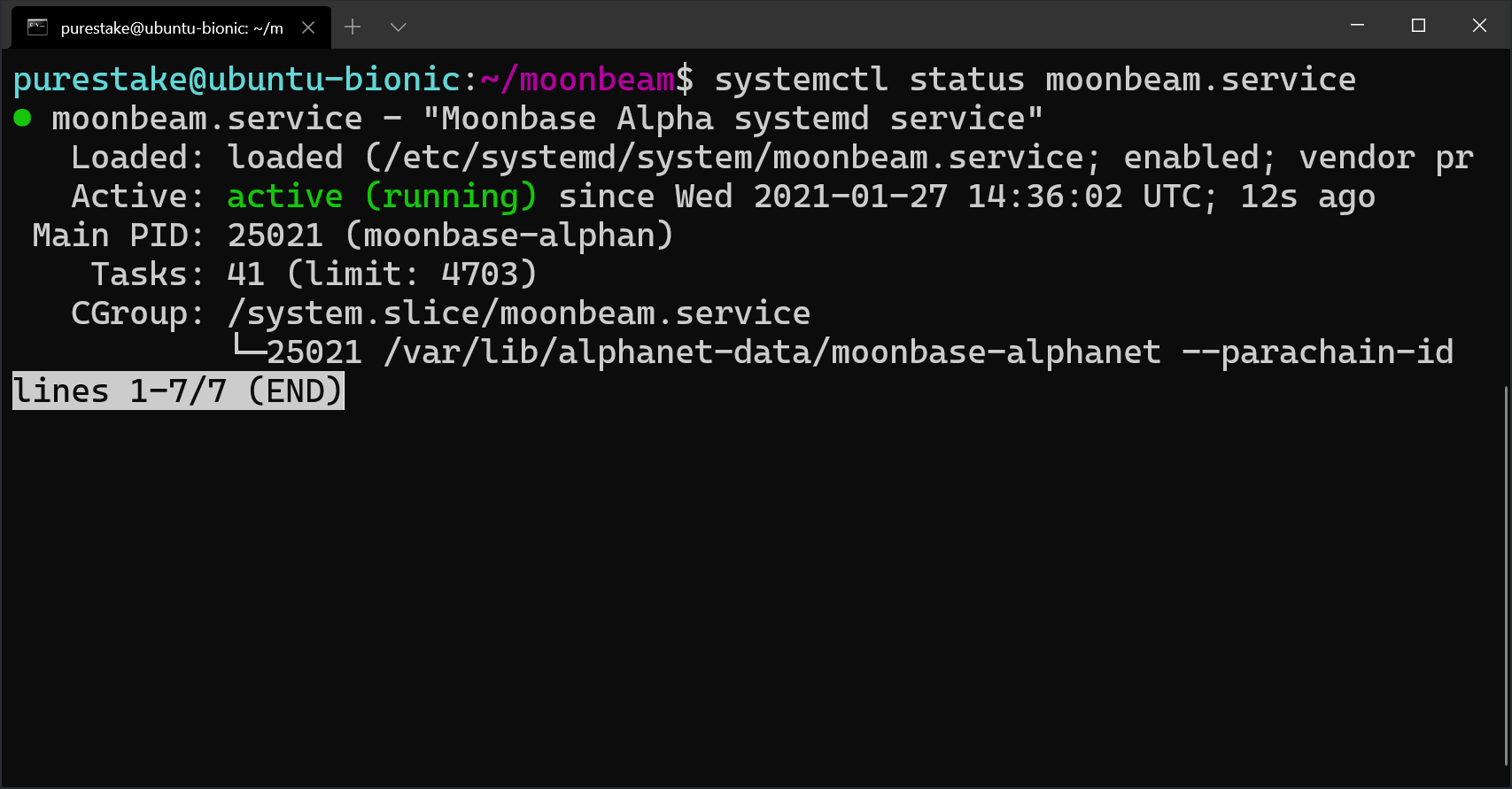 You can also check the logs by executing: 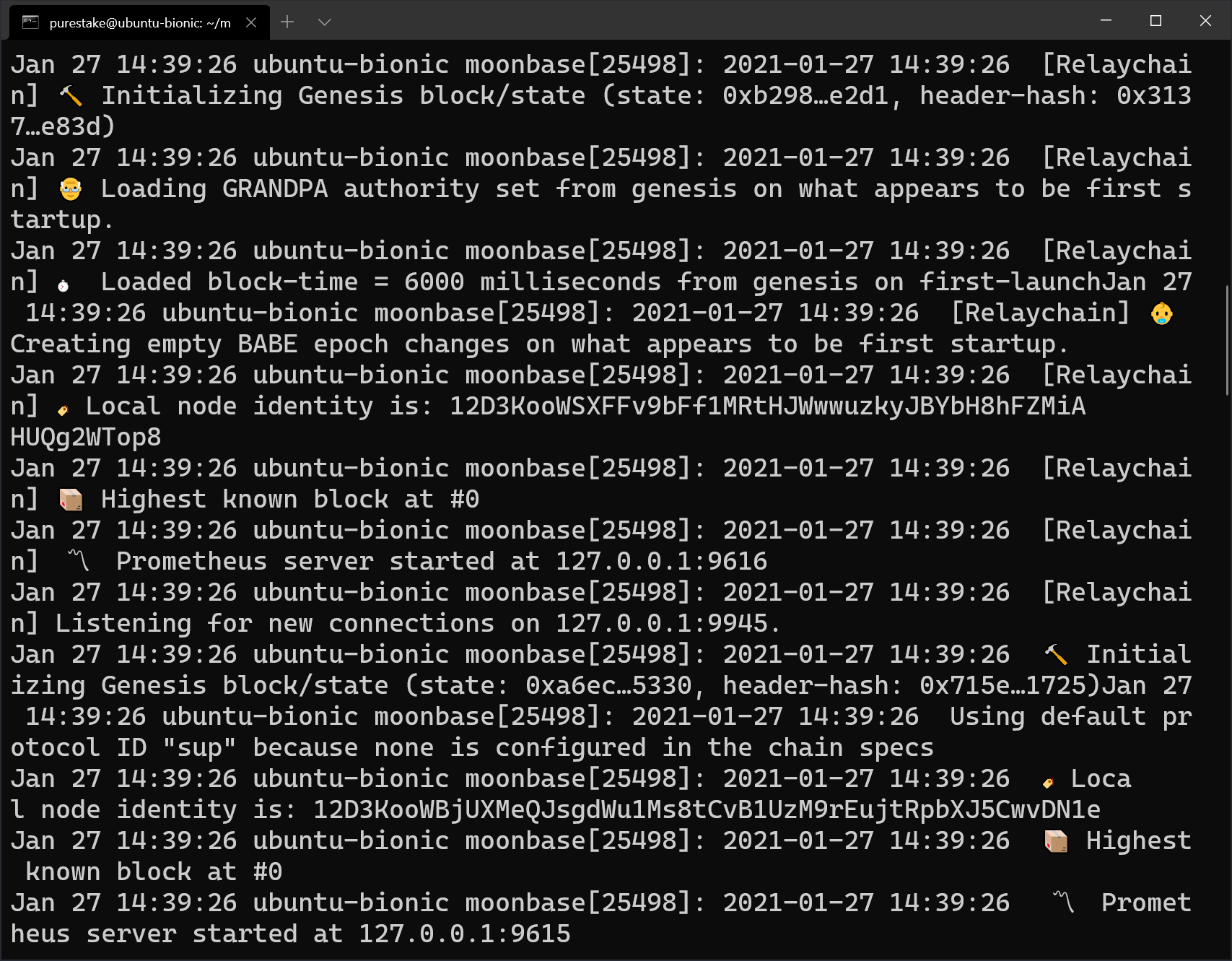 If you need to stop the service for any reason, you can run:

As Moonbeam development continues, it will sometimes be necessary to upgrade your node software. Node operators will be notified on our Discord channel when upgrades are available and whether they are necessary (some client upgrades are optional). The upgrade process is straightforward and is the same for a full node or collator.

If you want to update your client, you can keep your existing chain data in tact, and only update the binary by following these steps:

To check the status of the service and/or logs, you can refer to the commands from before.

If you need a fresh instance of your Moonbeam node, you can purge your node by removing the associated data directory.

To purge your parachain and relay chain data, you can run the following command:

To only remove the parachain data for a specific chain, you can run:

Similarly, to only remove the relay chain data, you can run:

Now that your chain data has been purged, you can start a new node with a fresh data directory. You can install the newest version by repeating the Installation Instructions. Make sure you are using the latest tag available, which you can find on the Moonbeam GitHub Release page.

On an as-needed basis, Moonbase Alpha might be purged and reset. In these instances, you will need to purge both the parachain data and the relay chain data. If a purge is required, node operators will be notified in advance (via our Discord channel).

You can add the following flags to the above command if you want to specify what data should be purged:

You can also specify a chain to be removed:

To purge only your Moonbase Alpha parachain data, for example, you would run the following command:

To specify a path to the chainspec for a development chain to be purged, you would run:

Now that your chain data has been purged, you can start a new node with a fresh data directory. You can install the newest version by repeating the Installation Instructions. Make sure you are using the latest tag available, which you can find on the Moonbeam GitHub Release page.

On an as-needed basis, Moonbase Alpha might be purged and reset. In these instances, you will need to purge both the parachain data and the relay chain data. If a purge is required, node operators will be notified in advance (via our Discord channel).