Randomness is necessary for a variety of blockchain applications to create unbiased, unpredictable, and unique outcomes. However, obtaining a reliable source of randomness is a challenge. Computers are deterministic, meaning given the same input, the same output will always be produced. Therefore, random values generated by computers are referred to as pseudo-random as they appear to be statistically random, but given the same input, the output can easily be repeated.

You can interact with and request on-chain randomness using the randomness precompile contract, a Solidity interface that enables smart contract developers to access the randomness functionality through the Ethereum API. For more information, please check out the Interacting with the Randomness Precompile guide. You can also take a look at the Randomness Pallet, which can be used to obtain current randomness requests and results.

You can request local VRF randomness using the requestLocalVRFRandomWords method of the randomness precompile.

If your contract could have concurrent requests open, you can use the requestId returned from the requestLocalVRFRandomWords method to track which response is associated with which randomness request.

The randomness is constant during a full epoch, so if a collator skips block production, the next collator can fulfill it with the same random value.

At the beginning of each relay chain epoch change, the randomness from one epoch ago is read from the relay chain state proof and used to fulfill all randomness requests that are due in the current block.

In general, the request and fulfill process for randomness is as follows:

If a request expires it can be purged by anyone. When this happens, the request fee is paid out to the address that initiated the purge and the deposit is returned to the original requester.

The happy path for a randomness request is shown in the following diagram: 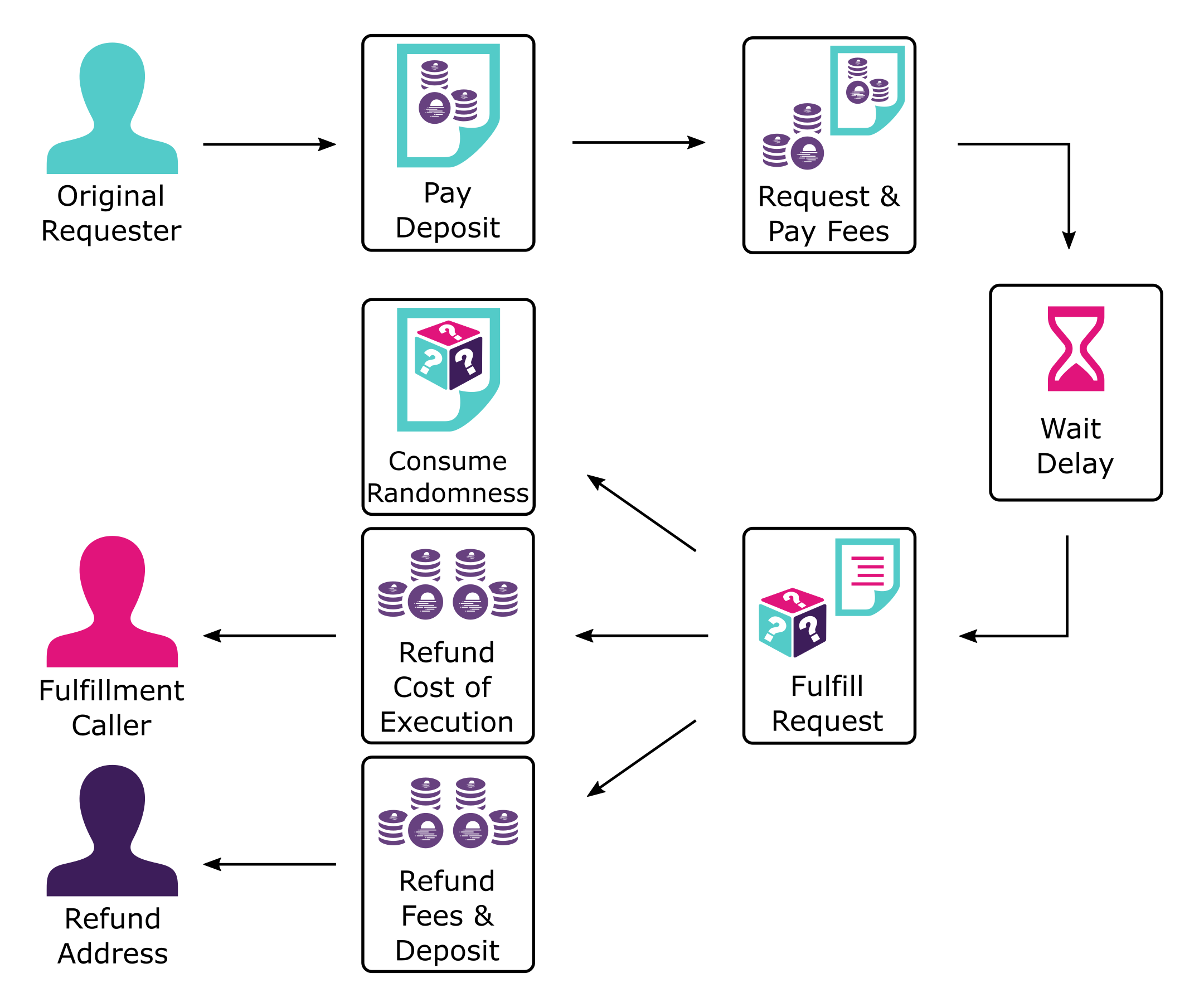 For your users to trust that your contract's random behavior is free from malicious interference, it's best if you can write it so that all behaviors implied by a VRF response are executed during your fulfillRandomness method. If your contract must store the response (or anything derived from it) and use it later, you must ensure that any user-significant behavior which depends on that stored value cannot be manipulated by a subsequent VRF request.

Since the output of the random words generated for requestLocalVRFRandomWords is dependent on the collator producing the block at fulfillment, the collator could skip its block, forcing the fulfillment to be executed by a different collator and therefore generating a different VRF. However, such an attack would incur the cost of losing the block reward to the collator. It is also possible for a collator to be able to predict some of the possible outcome of the VRF if the delay between the request and the fulfillment is too short. It is for this reason that you can choose to provide a higher delay.

Since the output of the random words generated for requestRelayBabeEpochRandomWords is dependent on the relay chain validator producing the blocks during an epoch, it is possible for the last validator of an epoch to choose between two possible VRF outputs by skipping the production of a block. However, such an attack would incur the cost of losing the block reward to the validator. It is not possible for a parachain collator to predict or influence the output of the relay chain VRF, not to censor the fulfillment, as long as there is one honest collator.