Interacting with the Democracy Precompile¶

As a Polkadot parachain and decentralized network, Moonbeam features native on-chain governance that enables stakeholders to participate in the direction of the network. To learn more about governance, such as an overview of related terminology, principles, mechanics, and more, please refer to the Governance on Moonbeam page.

The democracy precompile is located at the following address:

DemocracyInterface.sol is an interface through which Solidity contracts can interact with the democracy pallet. The beauty of the precompile is that you don’t have to learn the Substrate API — you can interact with functions using the Ethereum interface you're familiar with.

Interact with the Solidity Interface¶

The below example is demonstrated on Moonbase Alpha, however, similar steps can be taken for Moonbeam and Moonriver. Before diving into the interface, it's best if you're familiar with how to propose an action and how to vote on a proposal on Moonbeam. Additionally, you should: 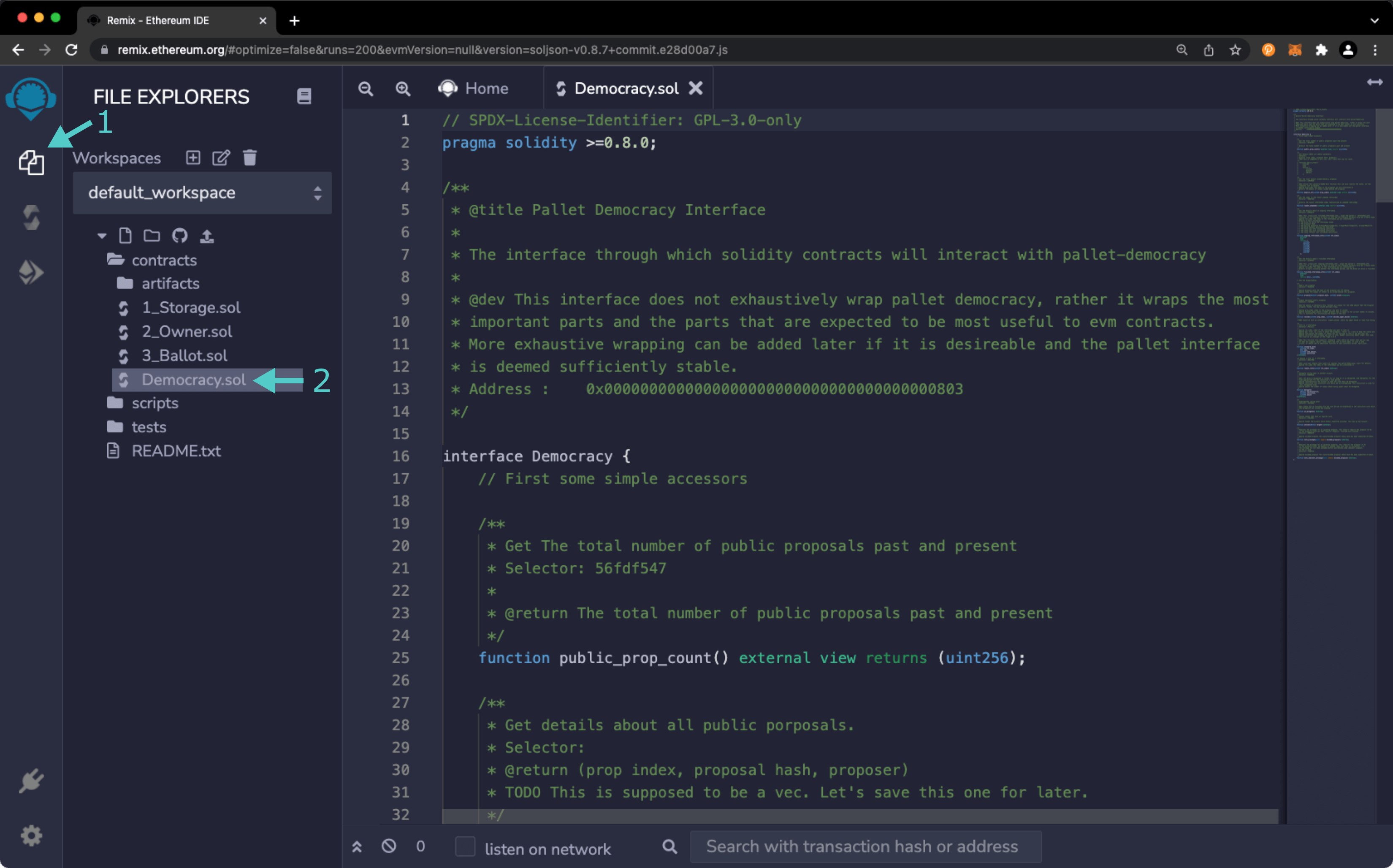 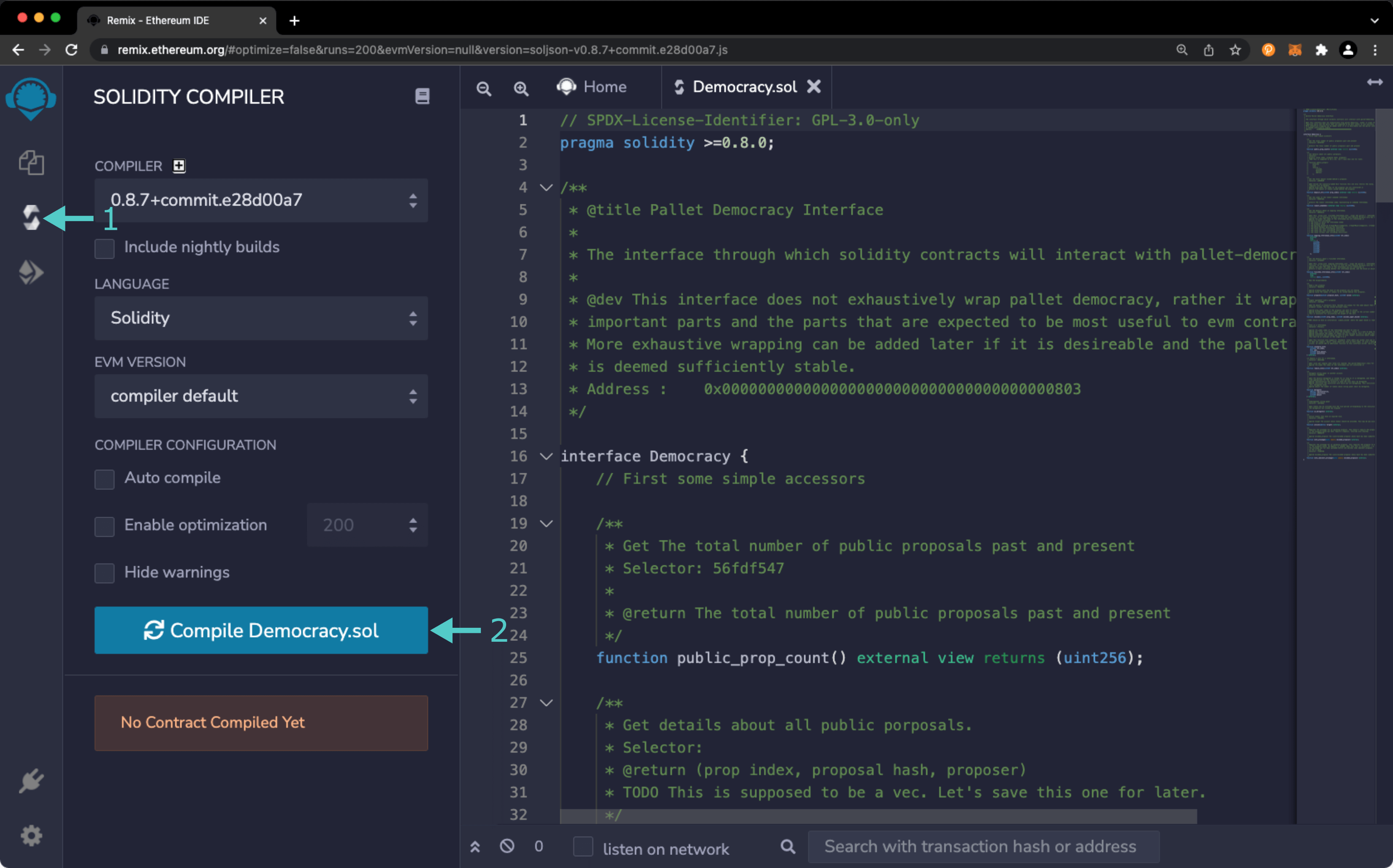 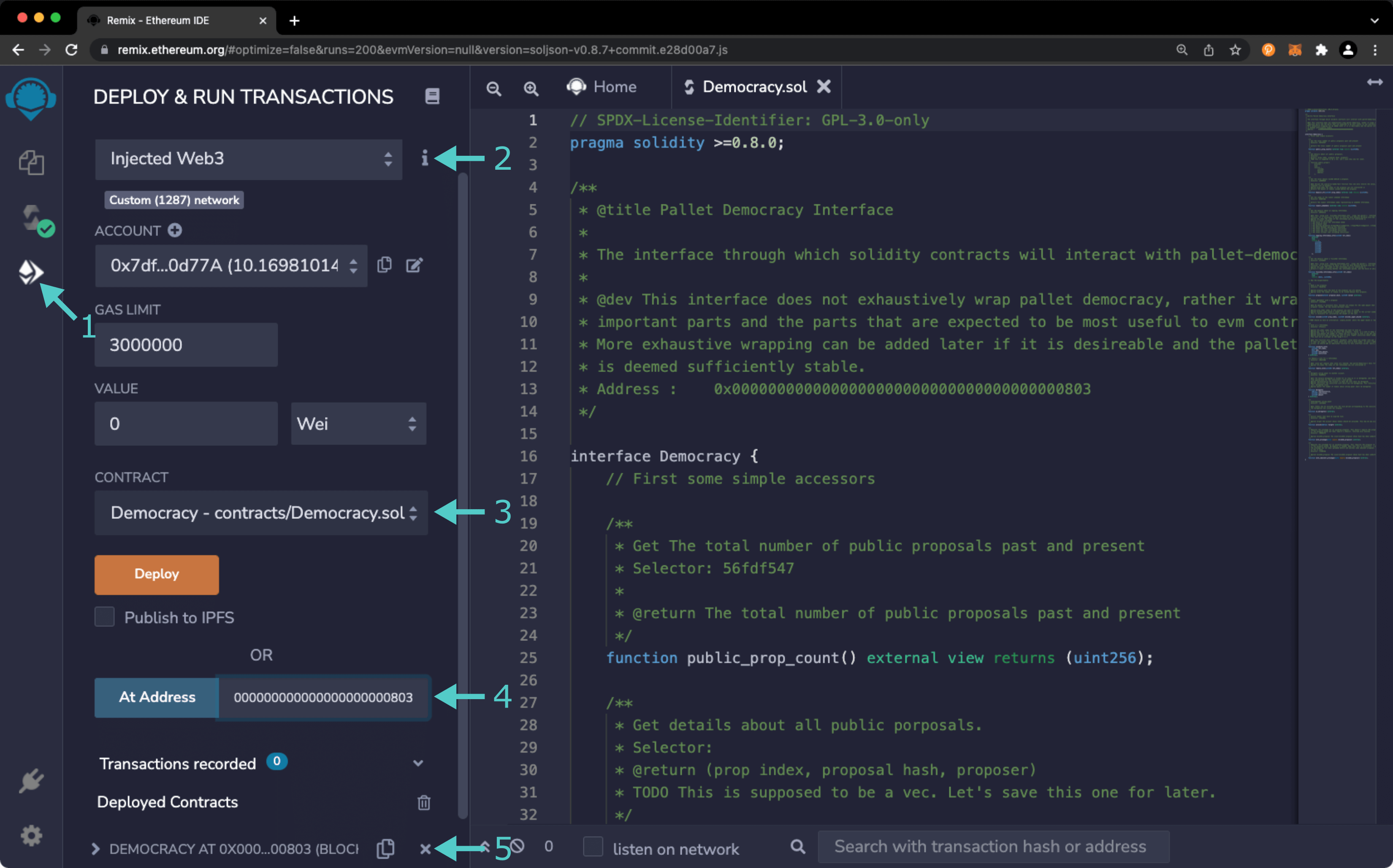 You can submit a proposal via the propose function of the democracy precompile as long as you have the preimage hash of the proposal. But before a proposal can be submitted, you'll first need to submit the preimage by passing in the encoded proposal data to the notePreimage function, which now belongs to the preimage pallet. 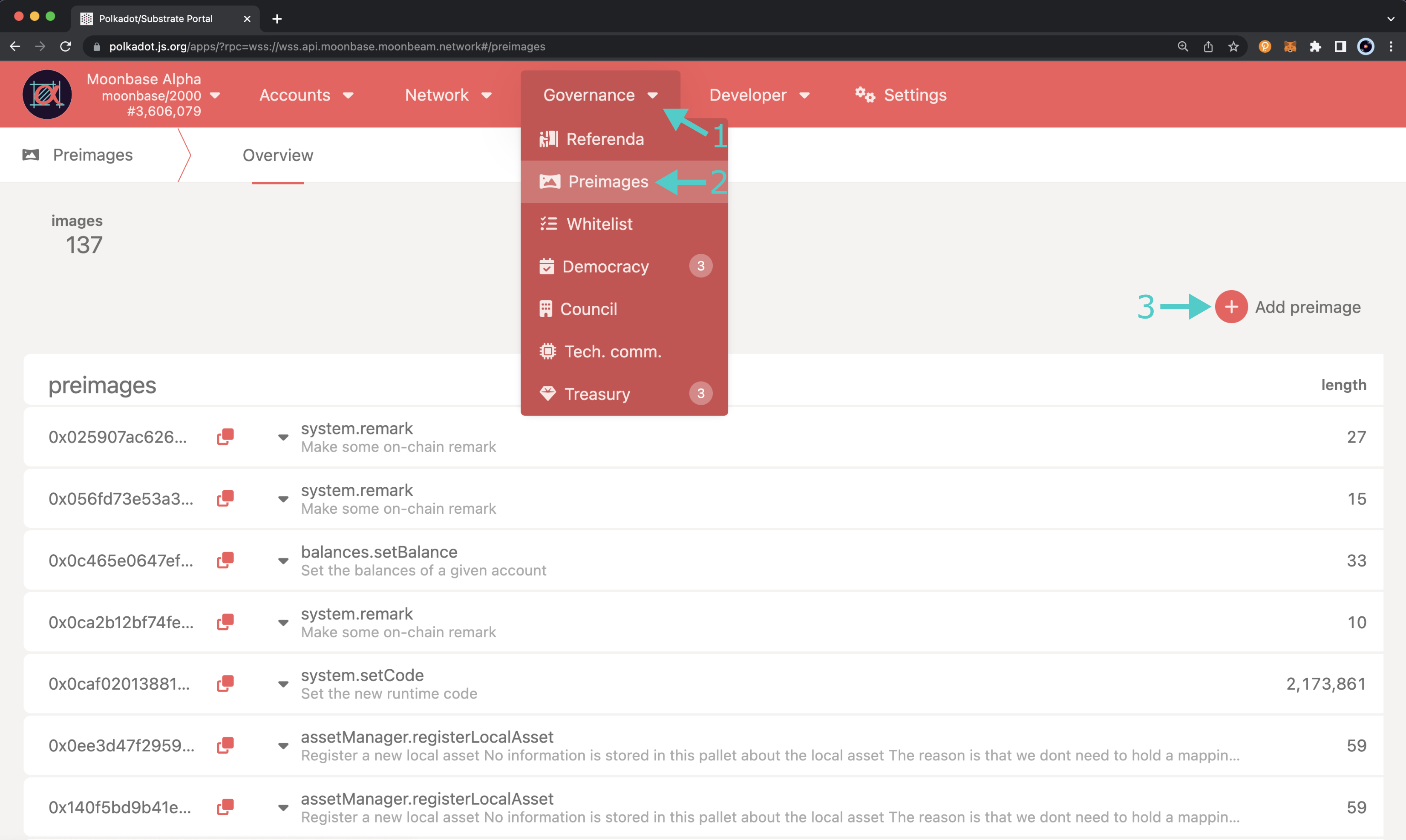 Then take the following steps: 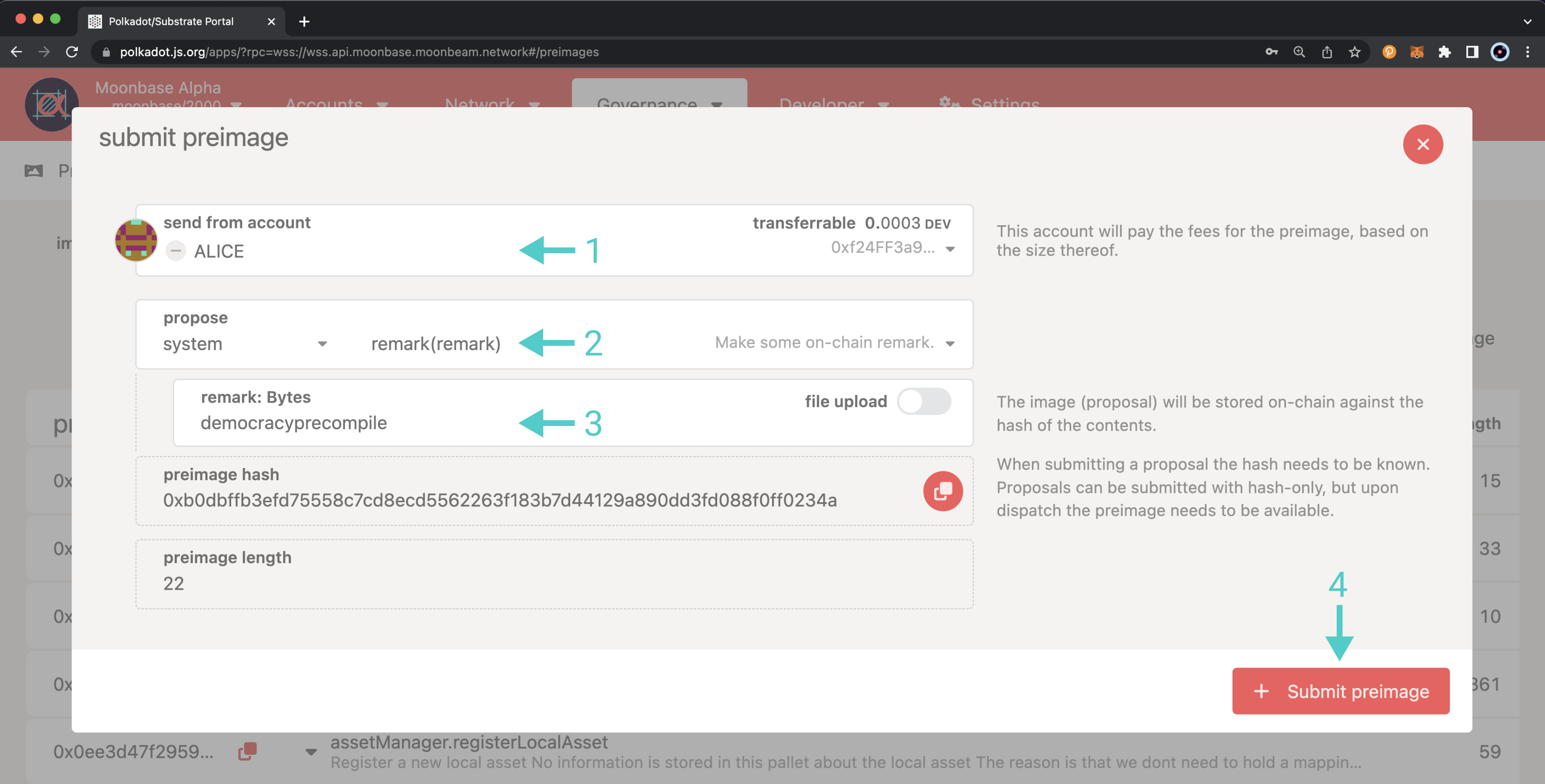 On the next screen, take the following steps: 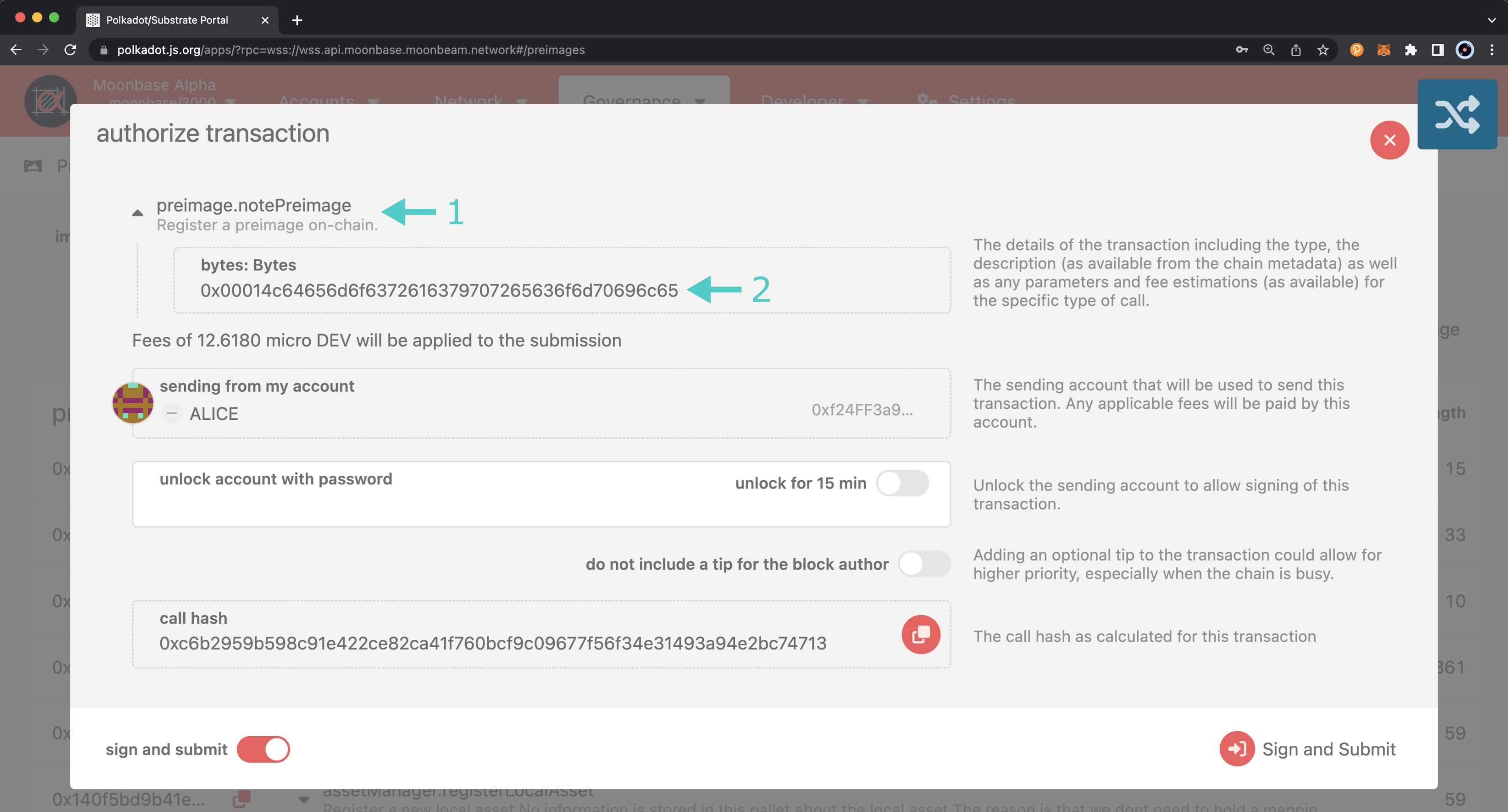 You should NOT sign and submit the transaction here. You will submit this information via the notePreimage function in the next step. 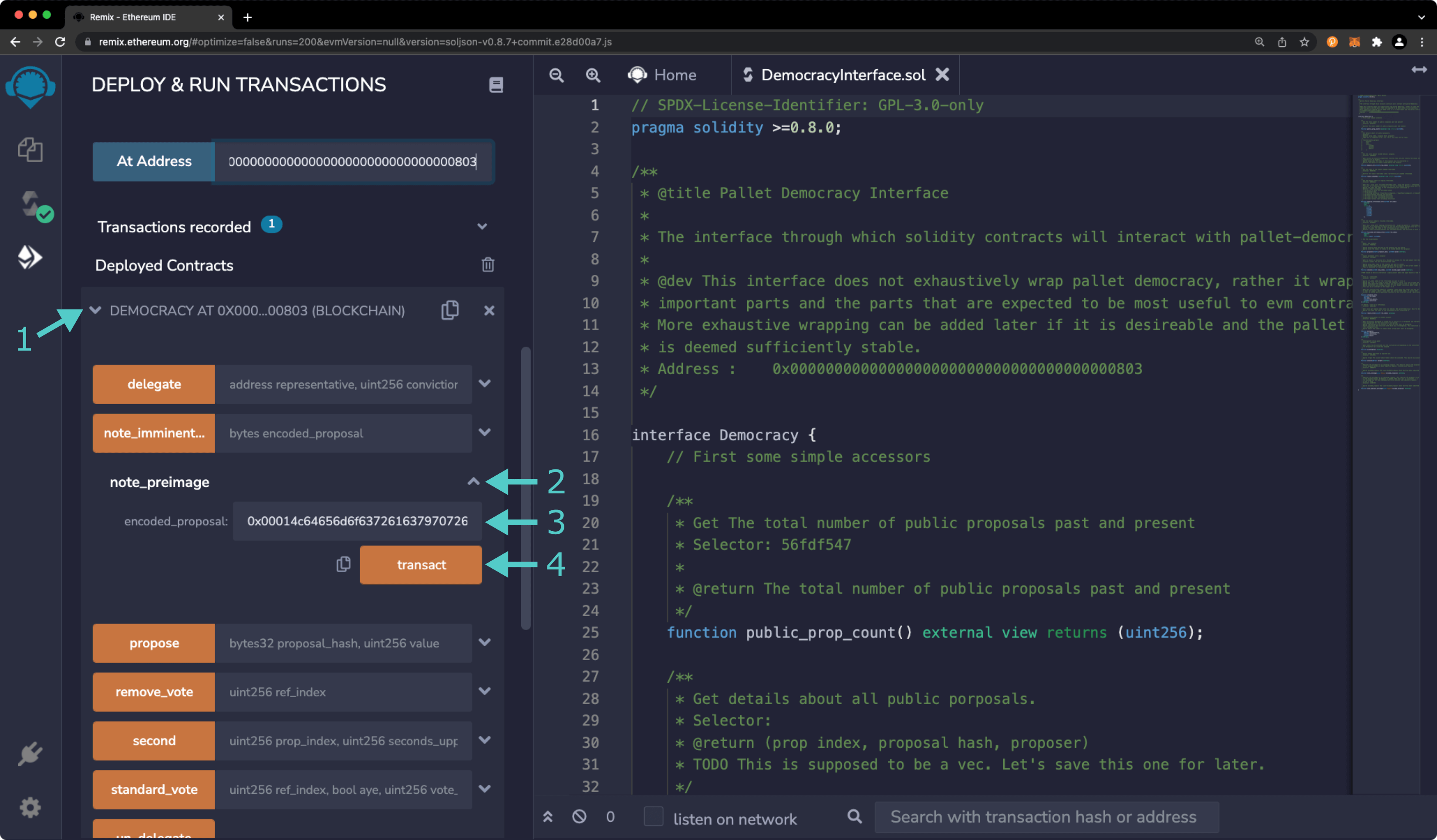 Next you can call the propose function of the Solidity interface by taking the following steps: 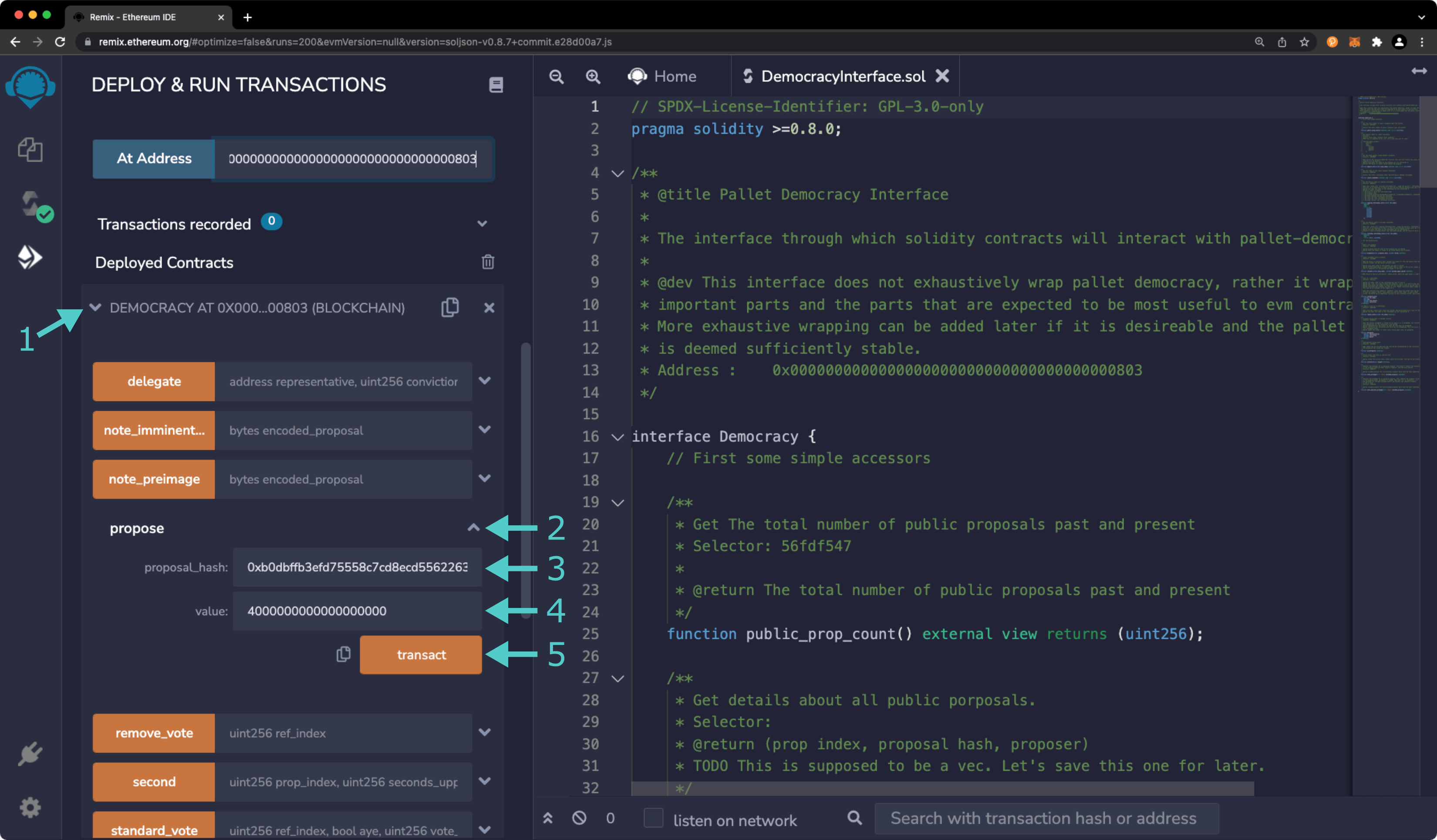 After your transaction has been confirmed you can return to the Democracy section of Polkadot.js Apps to see your proposal listed in the proposal queue.

First, you'll need to gather some information about the proposal you wish to second. Since you submitted a proposal in the prior step, there should be at least one proposal in the queue. To get the index of that proposal, head to Polkadot.js Apps and take the following steps: 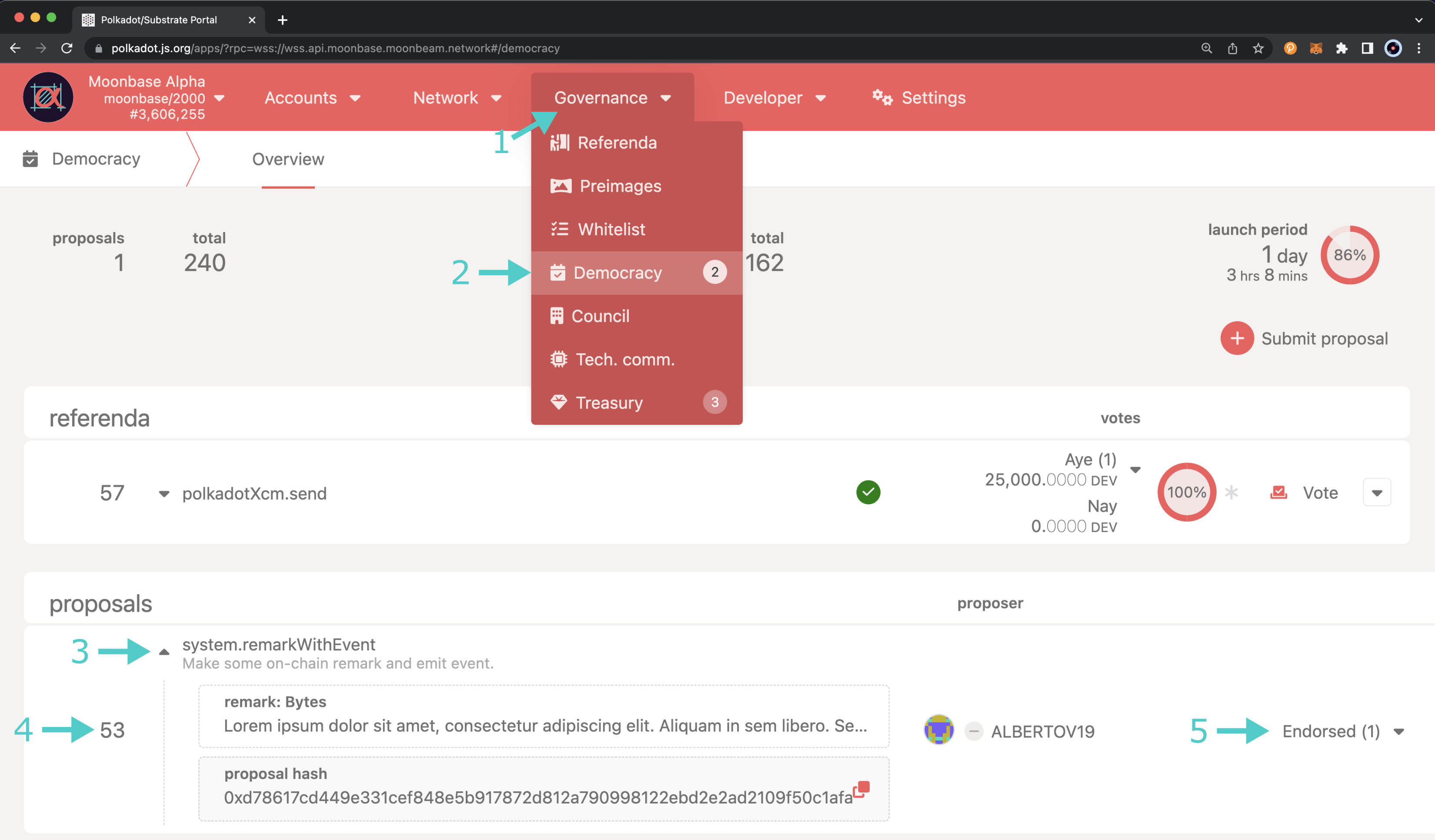 Now, you're ready to return to Remix to second the proposal via the democracy precompile. To do so, take the following steps:

And that's it! To review your seconded proposal, you can revisit Polkadot.js Apps and look for your account in the list of seconds. 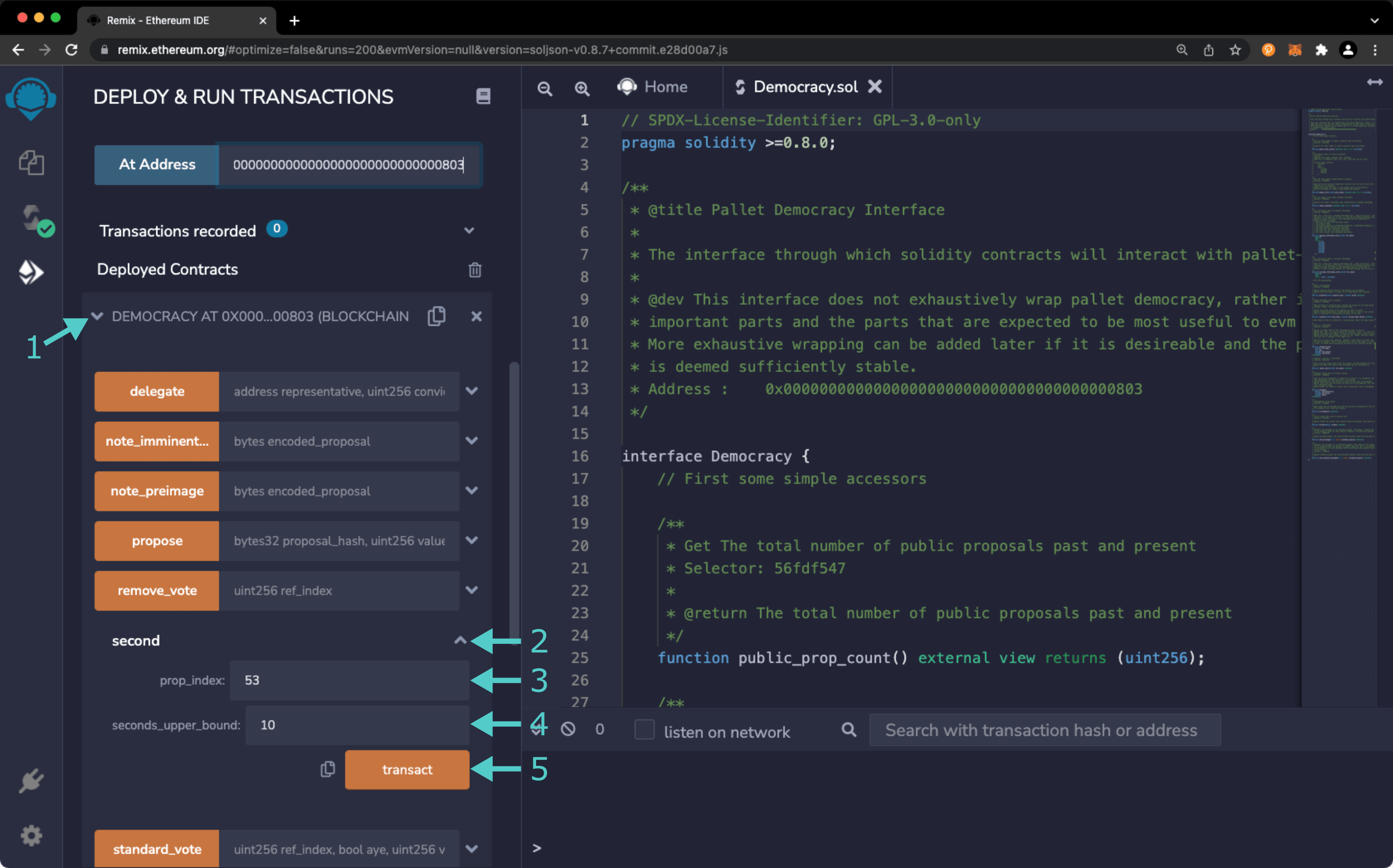 Seconded proposals transition to referendum status once per launch period, which is approximately 7 days on Moonbeam, 1 day on Moonriver, and 1 day on Moonbase Alpha. If there are no active referenda currently up for vote on Moonbase Alpha, you may need to wait for the launch period to pass for the proposal you seconded in the prior step to make it to referendum status.

Now, you're ready to return to Remix to vote on the referendum via the democracy precompile. To do so, take the following steps: 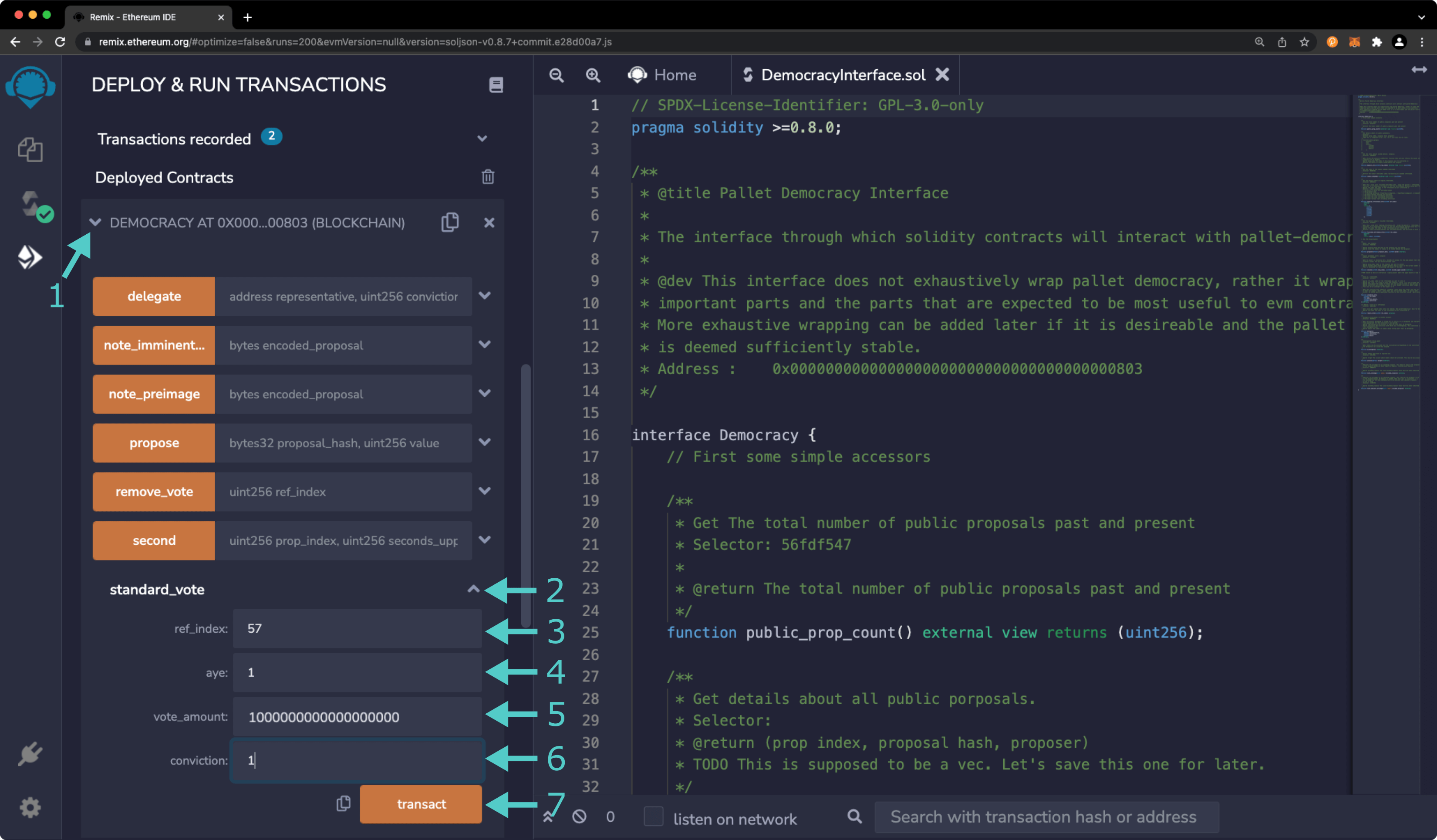