Interacting with the Collective Precompile¶

The collective precompile enables a user to directly interact with Substrate's collective pallet directly from a Solidity interface.

A collective is a group of members that are responsible for specific democracy-related actions such as proposing, voting on, executing, and closing motions. Each has can execute different actions with different origins. Consequently, collectives can be created with very specific scopes. For example, Moonbeam has three collectives: the council collective, the technical committee collective, and the treasury council collective. As such, there is a precompile for each collective. For more information on the council and technical committee, please refer to the Governance on Moonbeam page, and for more information on the treasury council, please refer to the Treasury on Moonbeam page.

This guide will show you how to propose, vote on, and close a proposal using the collective precompile.

The collective precompiles are located at the following addresses:

Collective.sol is a Solidity interface that allows developers to interact with the precompile's five methods.

Where the inputs that need to be provided can be defined as:

The interface includes the following events:

Interacting with the Solidity Interface¶

If you are not a member of the treasury council on Moonbeam, Moonriver, or Moonbase Alpha, you can test out the features of the collective precompile using a Moonbeam development node. The Moonbeam development node comes with ten pre-funded accounts, of which Baltathar, Charleth, and Dorothy are automatically set as members of the treasury council collective. You can use any of these three accounts to follow along with the rest of the guide.

The example in this guide will be shown on a Moonbeam development node, however, it can be adapted for any of the Moonbeam-based networks.

To get started, you will need to have the following:

If you're using a Moonbeam development node and the development accounts, you'll also need to do the following: 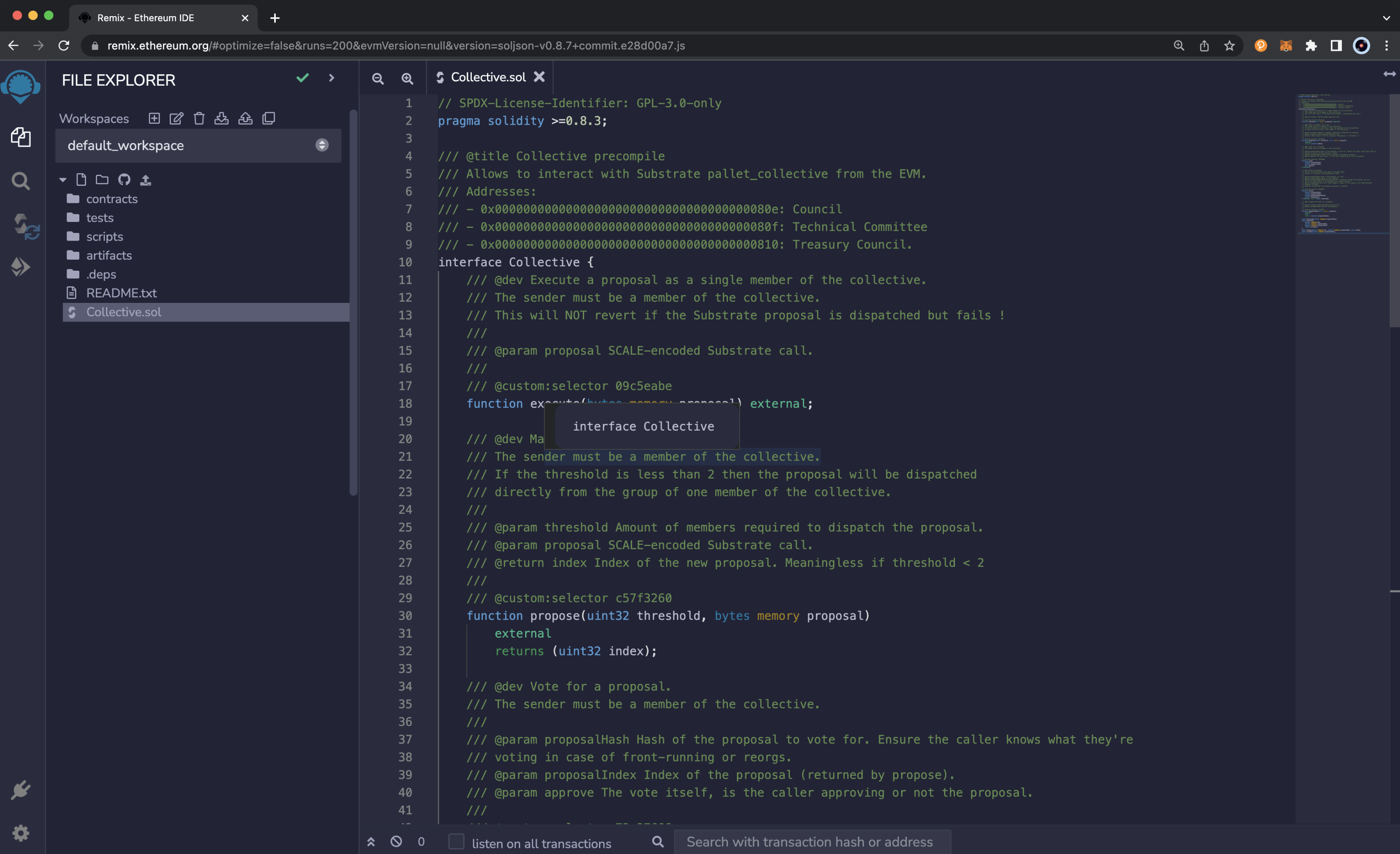 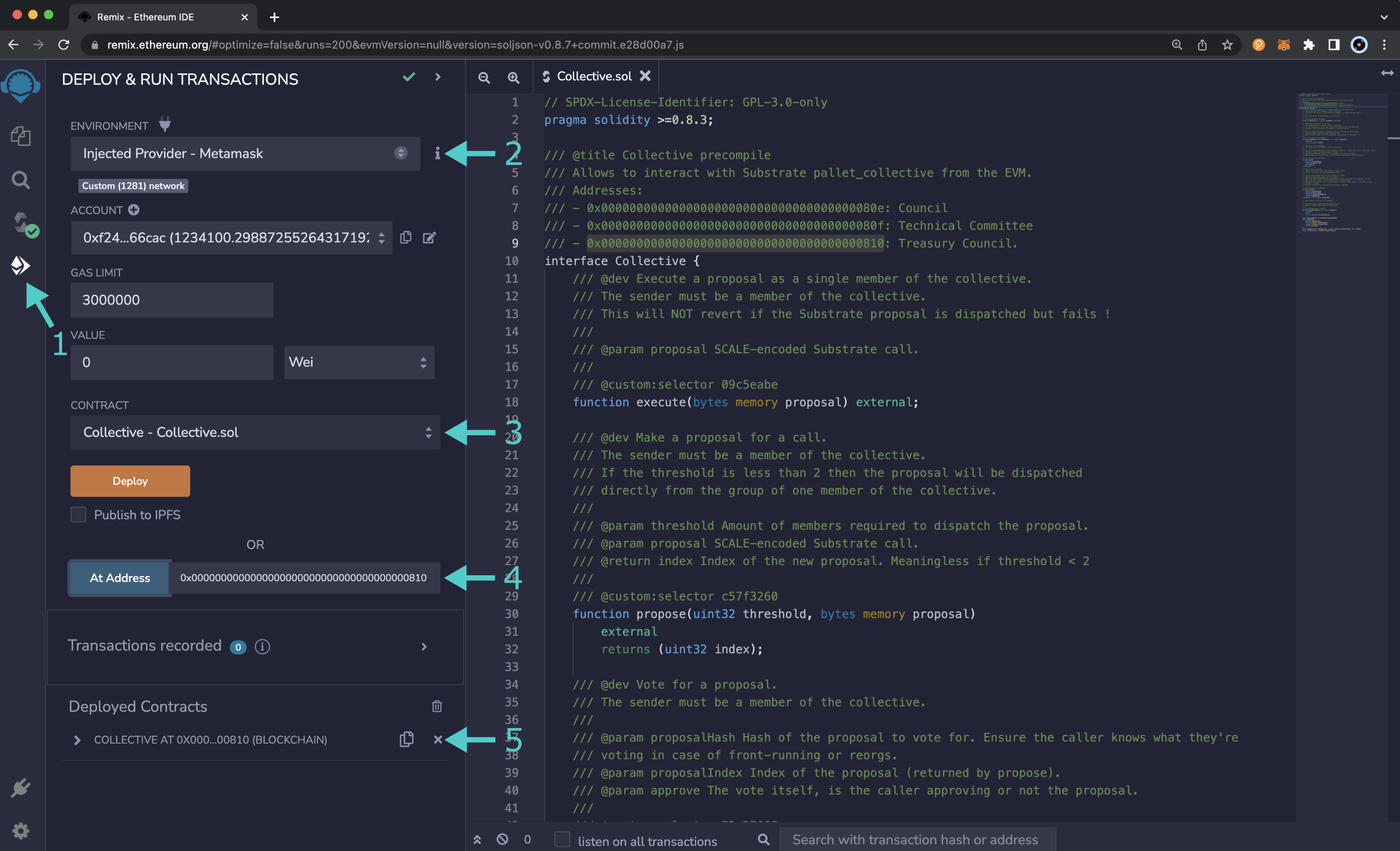 To submit a treasury proposal, you can do so via the Polkadot.js Apps treasury page. For this example, you can create a simple proposal to send Alith 10 DEV tokens that can be used to host a community event. To get started, click on Submit proposal, and fill out the following information: 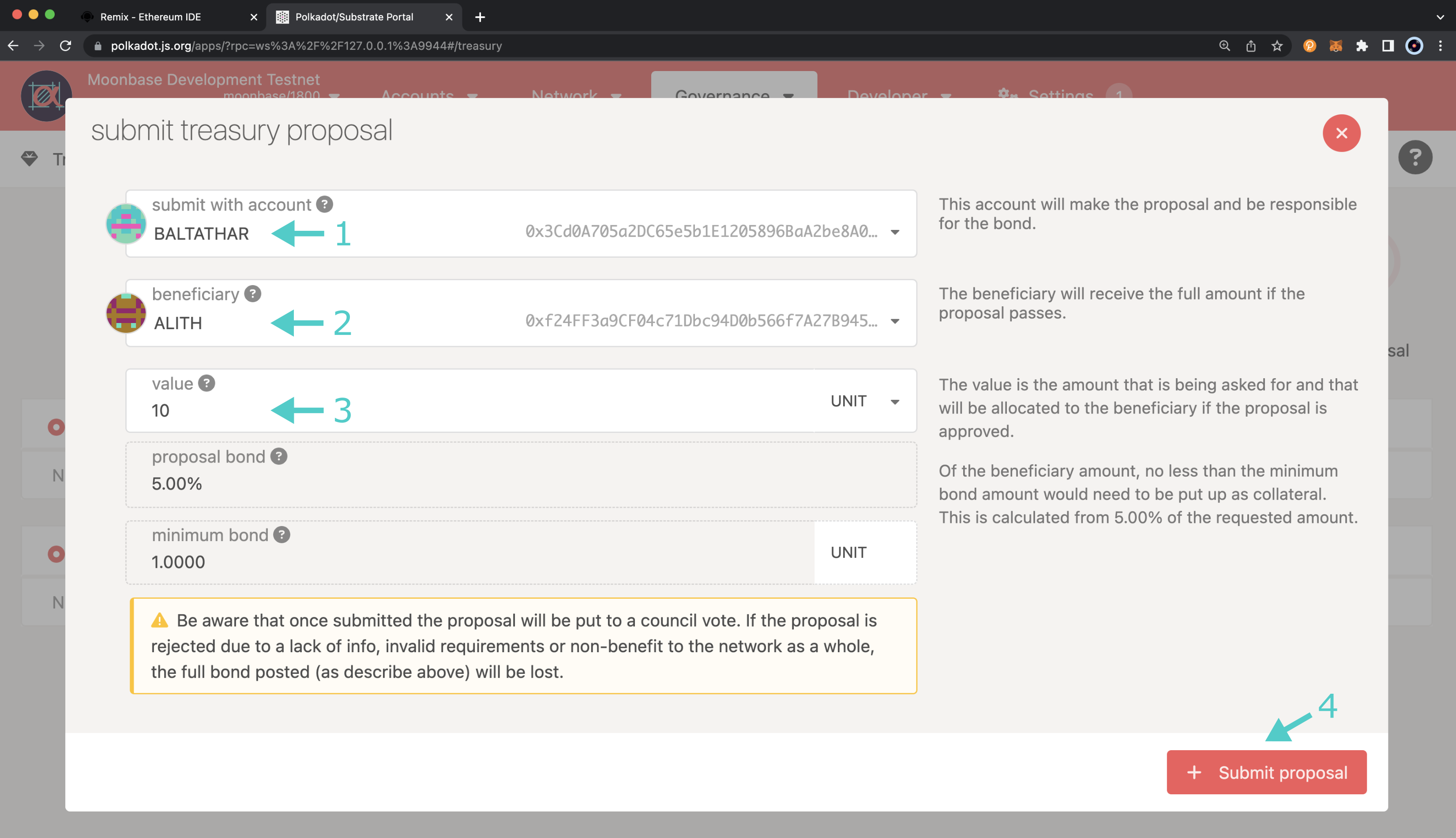 You should see the proposal appear in the proposals section. If this is the first proposal created, it will have a proposal index of 0, which will be needed in the next section. To view all of the proposals, you can navigate to the Developer tab, select Chain State, and take the following steps: 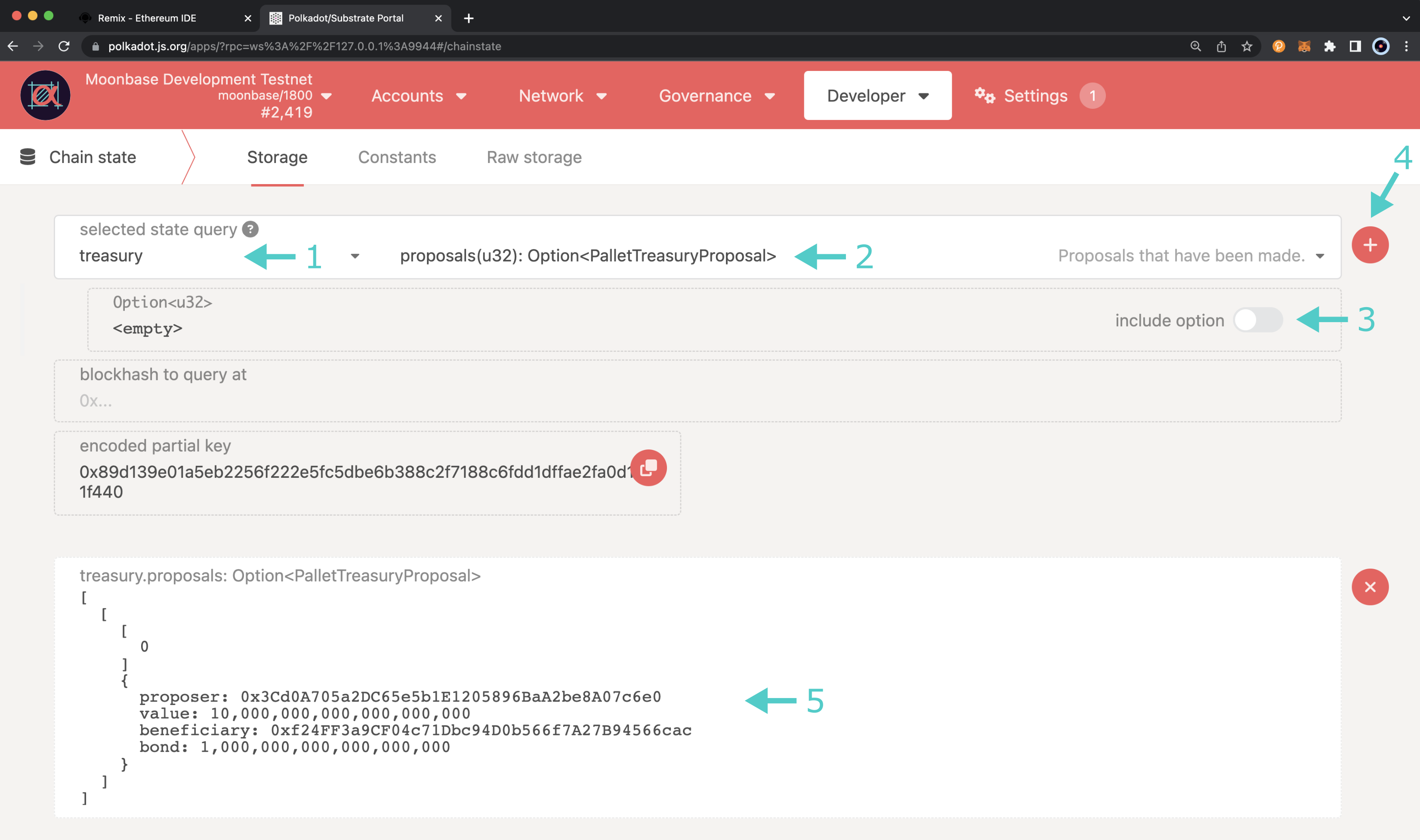 In order to propose a proposal using the collective precompile, so that the corresponding collective can vote on it, you will need to obtain the encoded call data of the call, to be executed by proposal. You can get the encoded call data from Polkadot.js Apps. For this example, you need to propose the approveProposal extrinsic of the treasury pallet. To do so, navigate to the Developer tab, select Extrinsics, and take the following steps:

For this example, the extrinsic encoded call data for the proposal in this example is 0x110200.

With the encoded proposal, you can head back to Remix and expand the COLLECTIVE precompile contract under the Deployed Contracts section. Make sure you're connected to your account that is a member of the treasury council, and take the following steps to propose the approval: 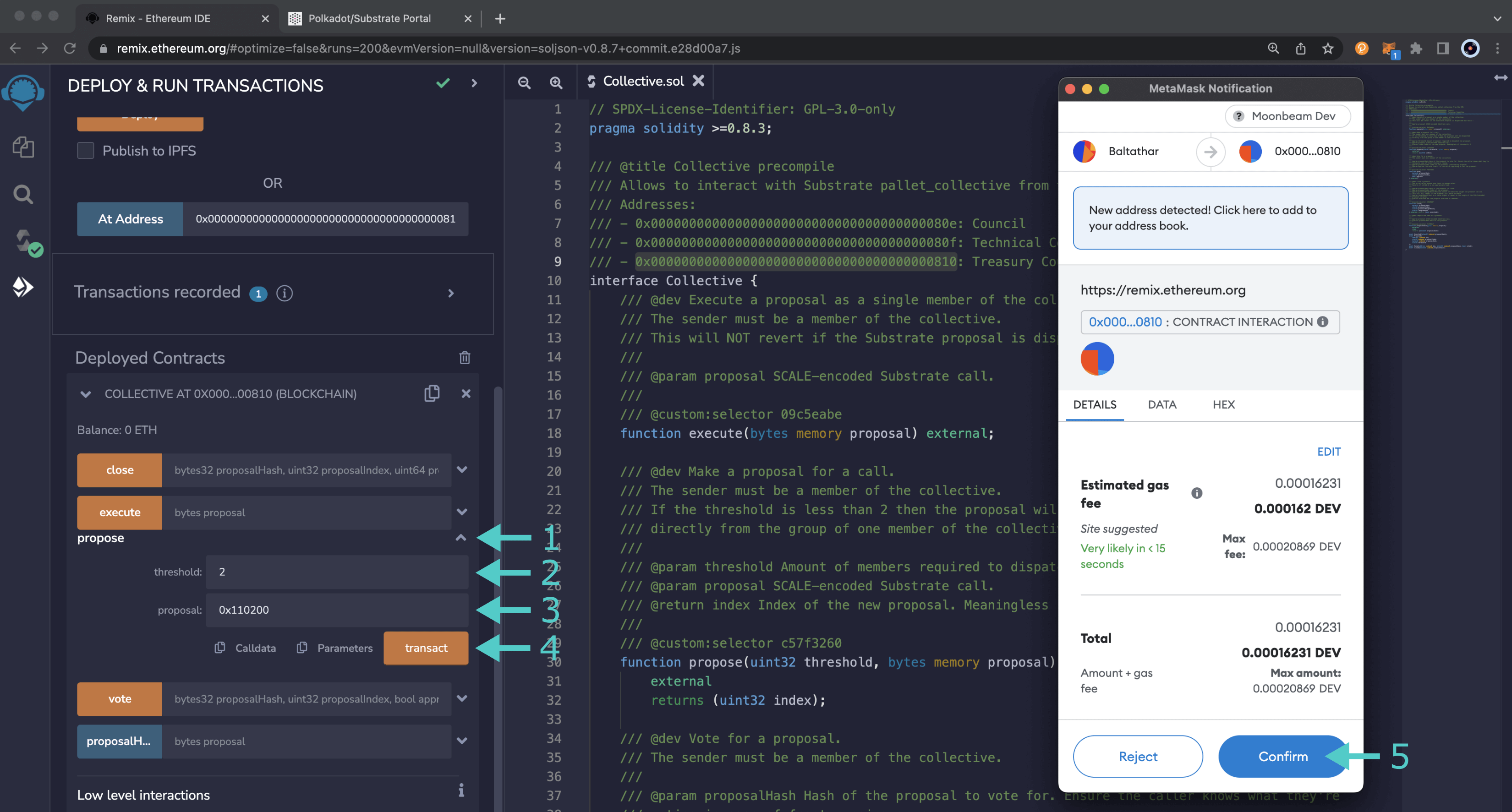 To vote on a proposal, you'll need to get the proposal hash by passing in the encoded proposal into the proposalHash function. 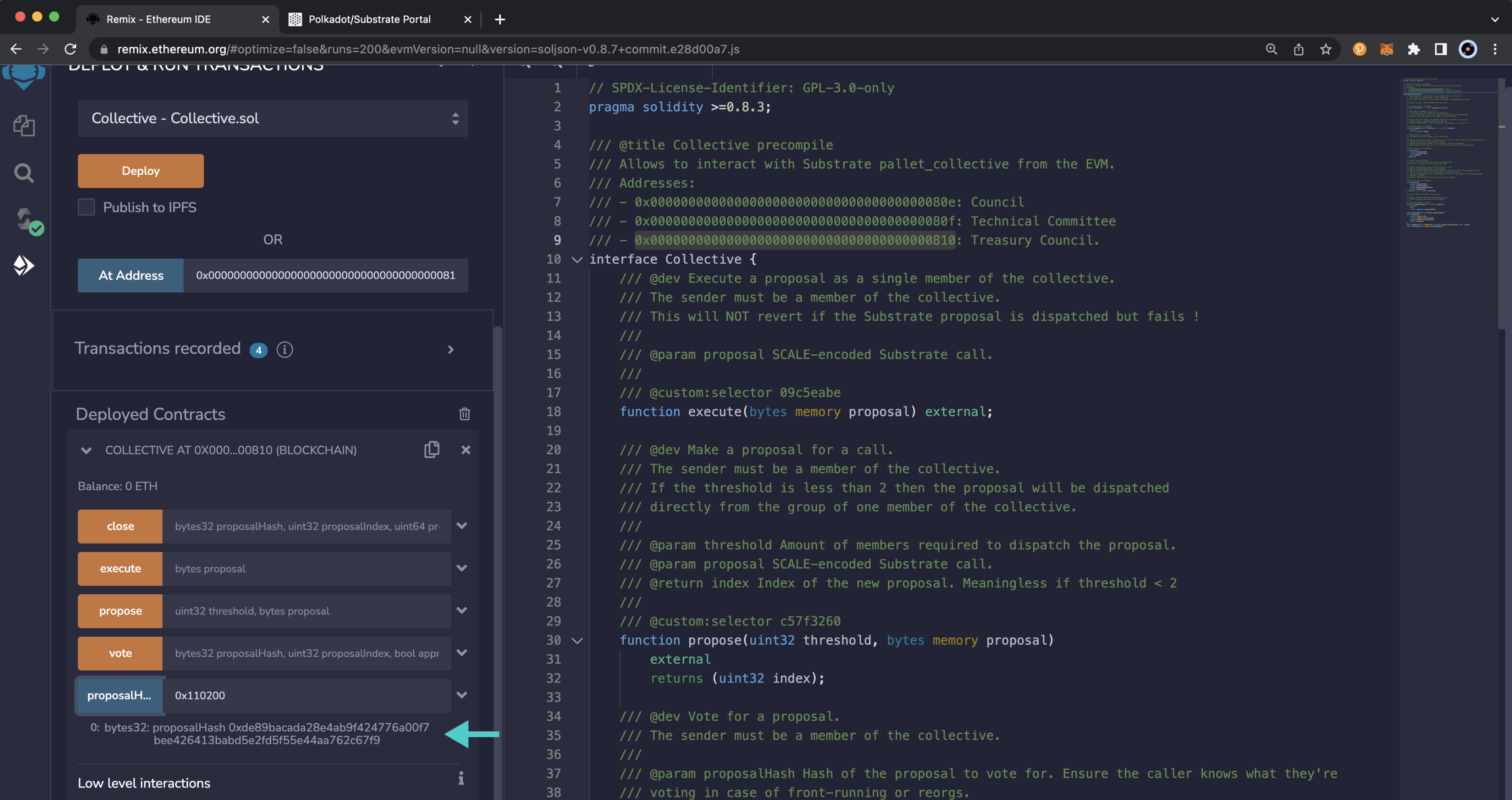 Once you have the proposal hash, make sure you're connected to your account that is a member of the treasury council, and take the following steps to vote on a proposal: 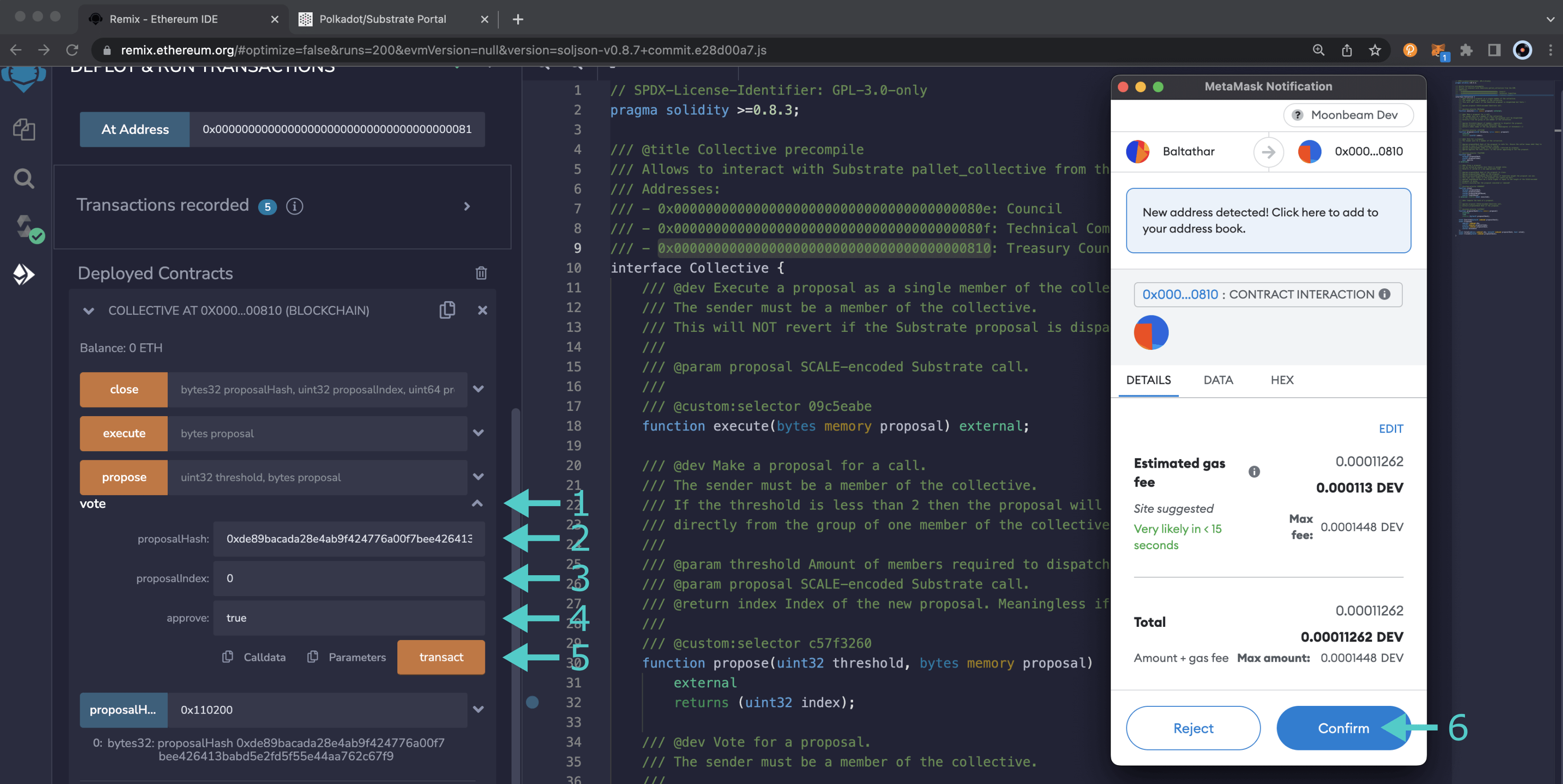 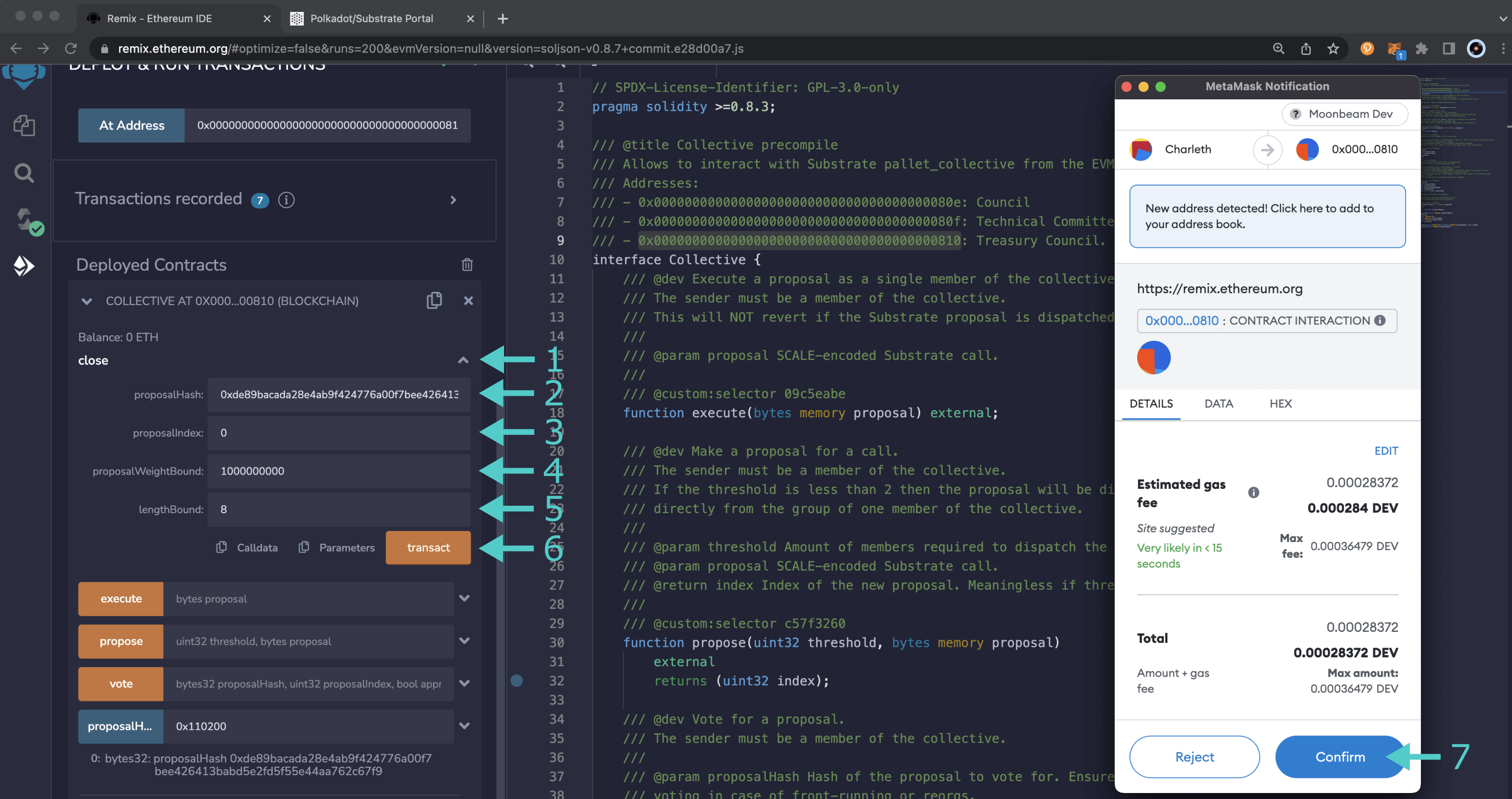 You can verify the proposal has been approved using Polkadot.js Apps. From the Developer tab, select Chain State, and take the following steps:

Once the proposal is in a spend period, the funds will get distributed to the beneficiary, and the original bond will be returned to the proposer. If the treasury runs out of funds, the approved proposals will remain in storage until the following spend period when the treasury has enough funds again.