Interacting with the Batch Precompile¶

The batch precompiled contract on Moonbeam allows developers to combine multiple EVM calls into one.

Currently, having users interact with multiple contracts would require multiple transaction confirmations in the user's wallet. An example would be approving a smart contract's access to a token, then transferring it. With the batch precompile, developers can enhance user experience with batched transactions as it minimizes the number of transactions a user is required to confirm to one. Additionally, gas fees can be reduced since batching avoids multiple base gas fees (the initial 21000 units of gas spent to begin a transaction).

The precompile interacts directly with Substrate's EVM pallet. The caller of the batch function will have their address act as the msg.sender for all subtransactions, but unlike delegate calls, the target contract will still affect its own storage. It is effectively the same as if the user signed multiple transactions, but with only one confirmation.

The precompile is located at the following address:

Batch.sol is a Solidity interface that allows developers to interact with the precompile's three methods.

Each of these functions have the following parameters:

Interact with the Solidity Interface¶

To follow along with this tutorial, you will need to have:

The contract SimpleContract.sol will be used as an example of batching contract interactions, but in practice, any contract can be interacted with.

You can interact with the batch precompile using Remix. You'll need a copy of Batch.sol and SimpleContract.sol. To add the precompile to Remix and follow along with the tutorial, you will need to:

Next, you will need to compile both files in Remix: 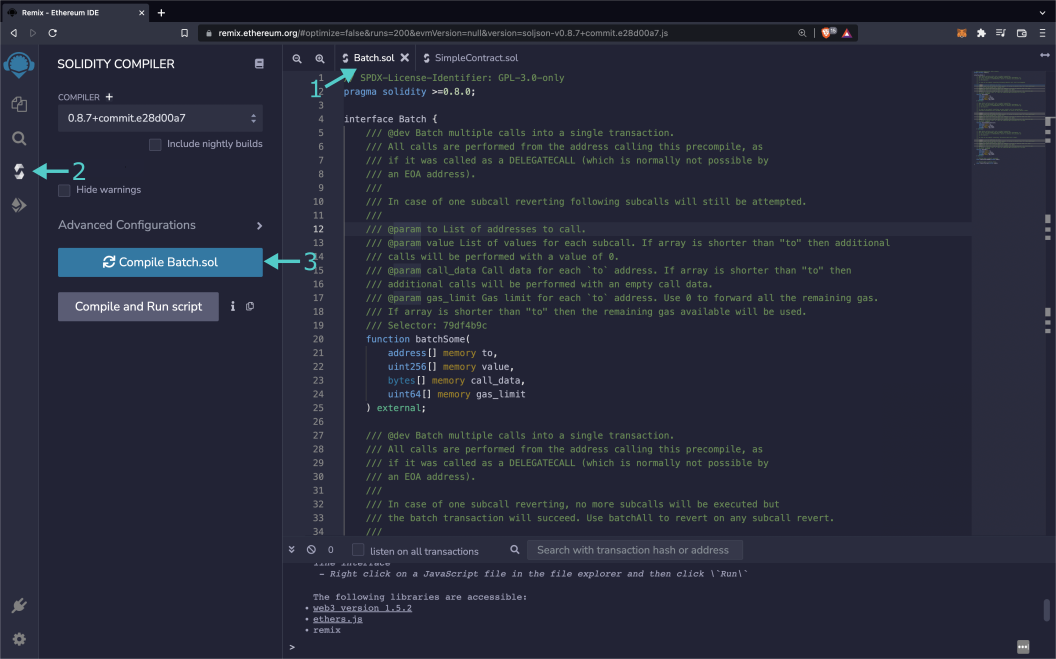 If the interface was compiled successfully, you will see a green checkmark next to the Compile tab.

Instead of deploying the batch precompile, you will access the interface given the address of the precompiled contract: 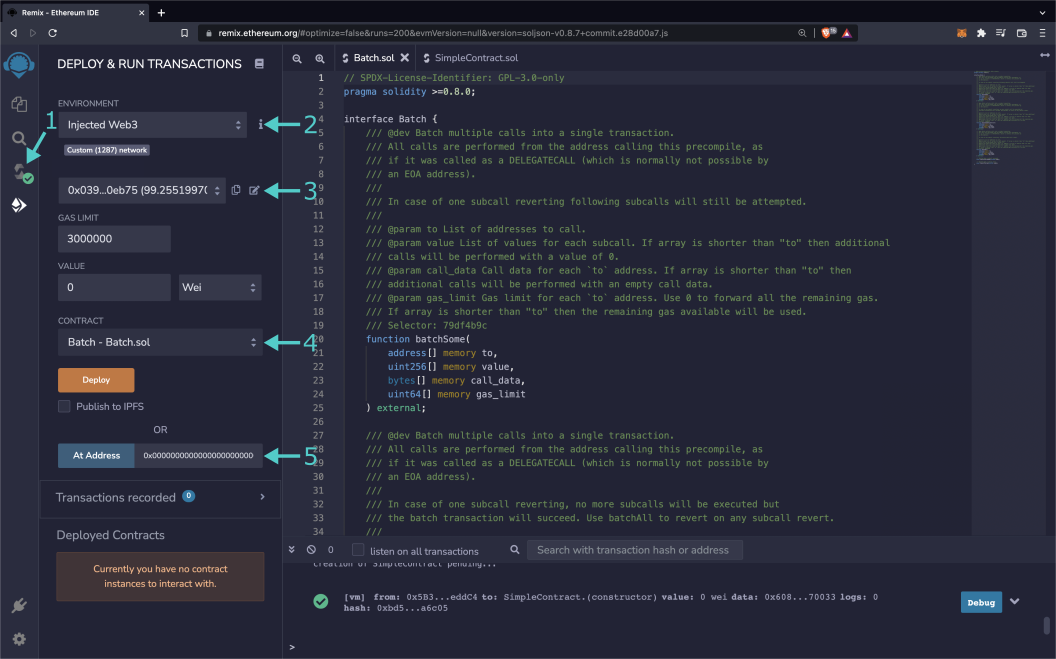 The BATCH precompile will appear in the list of Deployed Contracts.

The SIMPLECONTRACT contract will appear in the list of Deployed Contracts.

Sending native currency with the batch precompile is more involved than pressing a few buttons in Remix or MetaMask. For this example, you will be using the batchAll function to send native currency atomically.

Transactions have a value field to specify the amount of native currency being sent with it. In Remix, this is represented by the VALUE input in the DEPLOY & RUN TRANSACTIONS tab. However, for the batch precompile, this data is provided within the value array input of the batch functions.

Try transferring native currency to two wallets of your choice via the batch precompile on Moonbase Alpha: 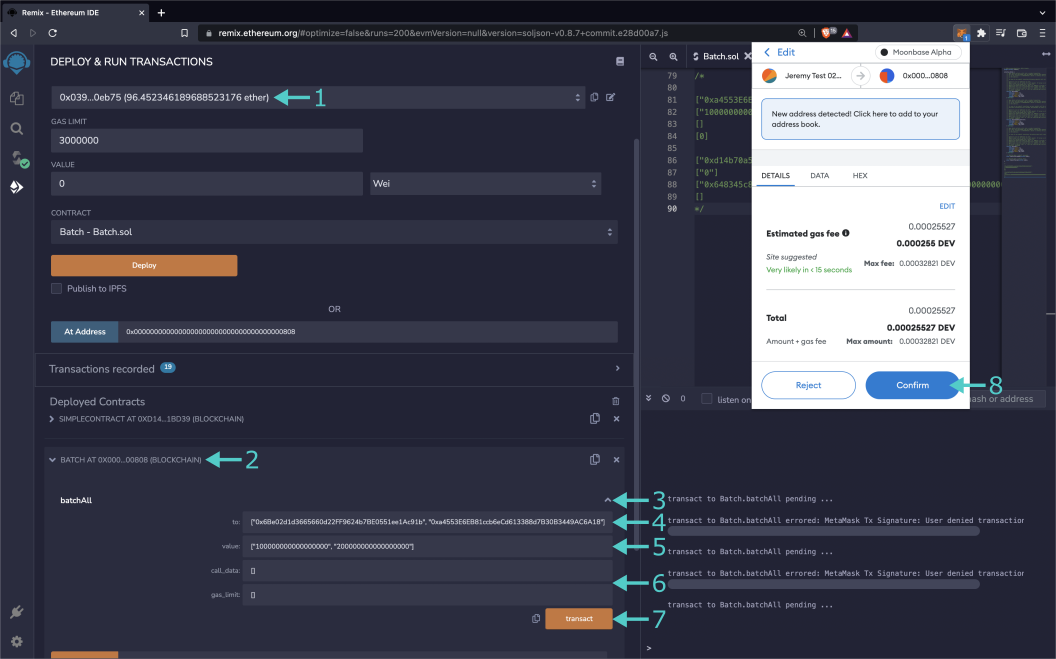 Once the transaction is complete, be sure to check both of the accounts' balances, either in MetaMask or in a block explorer. Congratulations! You've now sent a batched transfer via the batch precompile.

Typically if you wanted to send the native currency to or through a contract, you would have to set the value within the overall transaction object and interact with a payable function. However, since the batch precompile interacts directly with Substrate code, this is not a typical Ethereum transaction and is thus not necessary.

Visual interfaces like Remix and handy libraries like Ethers.js hide the way that Ethereum transactions interact with Solidity smart contracts. The name and input types of a function are hashed into a function selector and the input data is encoded. These two pieces are then combined and sent as the transaction's call data. To send a subtransaction within a batch transaction, the sender needs to know its call data beforehand. 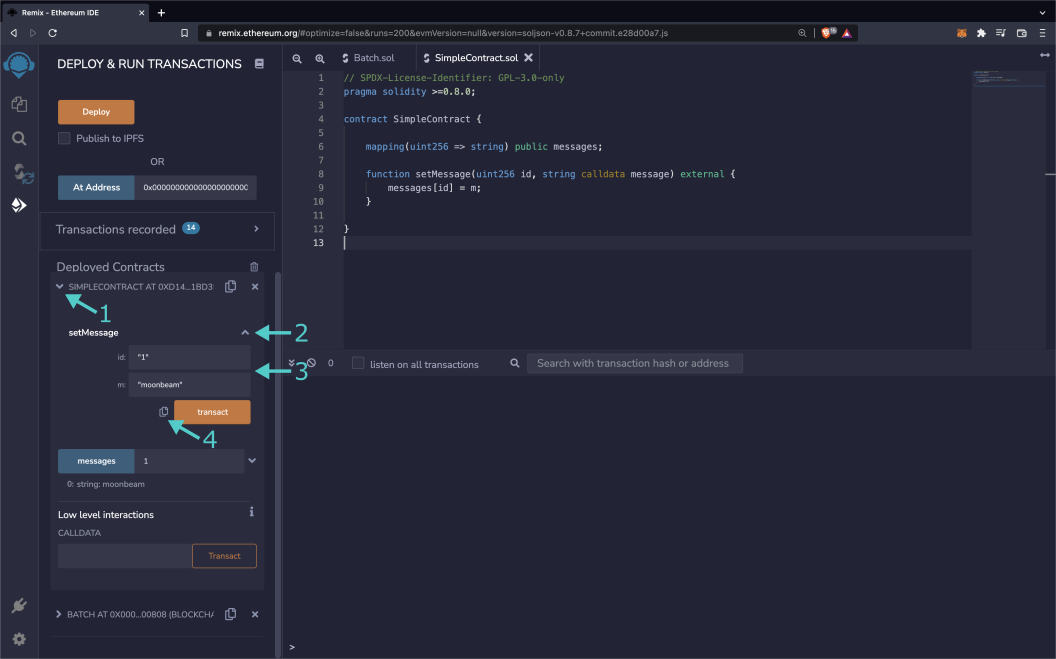 Now you have the transaction's call data! Considering the example values of 1 and "moonbeam", we can keep an eye out for their encoded values in the call data:

The call data can be broken into five lines, where:

This section's example will be using the batchAll function that will ensure the transactions are resolved atomically. Keep in mind that there are also two other batch functions that can either continue subtransactions despite errors or halt subsequent subtransactions but not revert previous ones.

Interacting with a function is very similar to sending a native currency, since they are both transactions. However, call data is required to properly provide input to functions and a sender may desire to limit the amount of gas spent in each subtransaction.

The callData and gasLimit fields are more relevant for subtransactions that interact with contracts. For each function in the batch interface, the callData input is an array where each index corresponds to the call data for each recipient of the subtransaction, that is, each to input. If the size of the callData array is less than the to array, the remaining subtransactions will have no call data (functions with no inputs). The gasLimit input is an array that corresponds to the amount of gas that each can spend for each subtransaction. If its value at an index is 0 or the index is the size of the array or greater (and smaller than the to array's size), all of the remaining gas from the previous subtransaction is forwarded.

To use the precompile to send an atomic batch transaction, take the following steps: 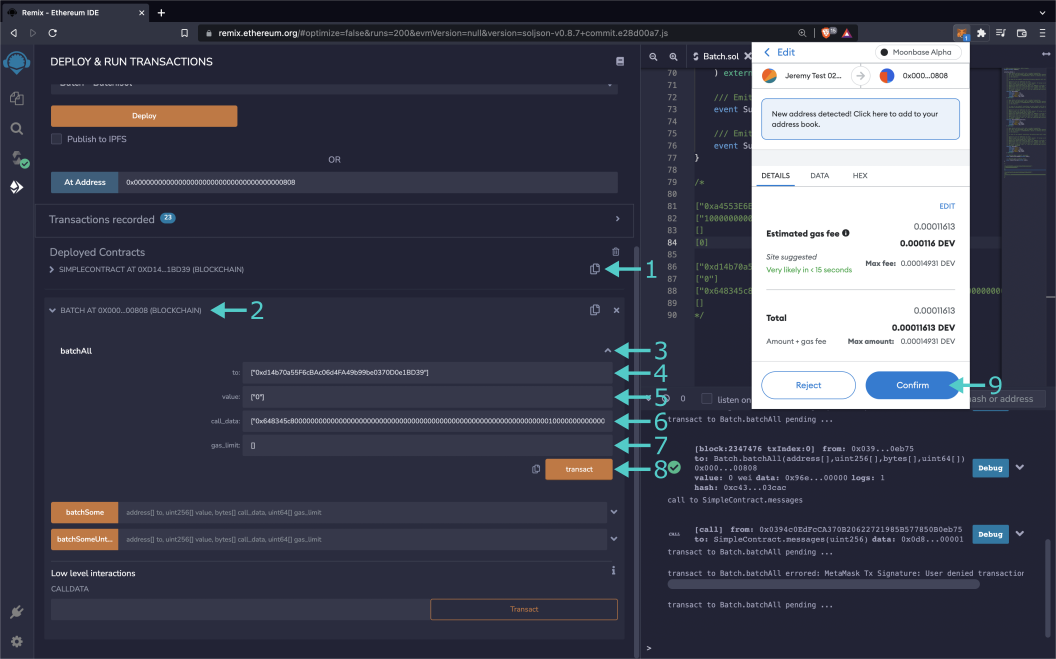 If you used the same call data as the tutorial, check to make sure that the transaction has been successful: 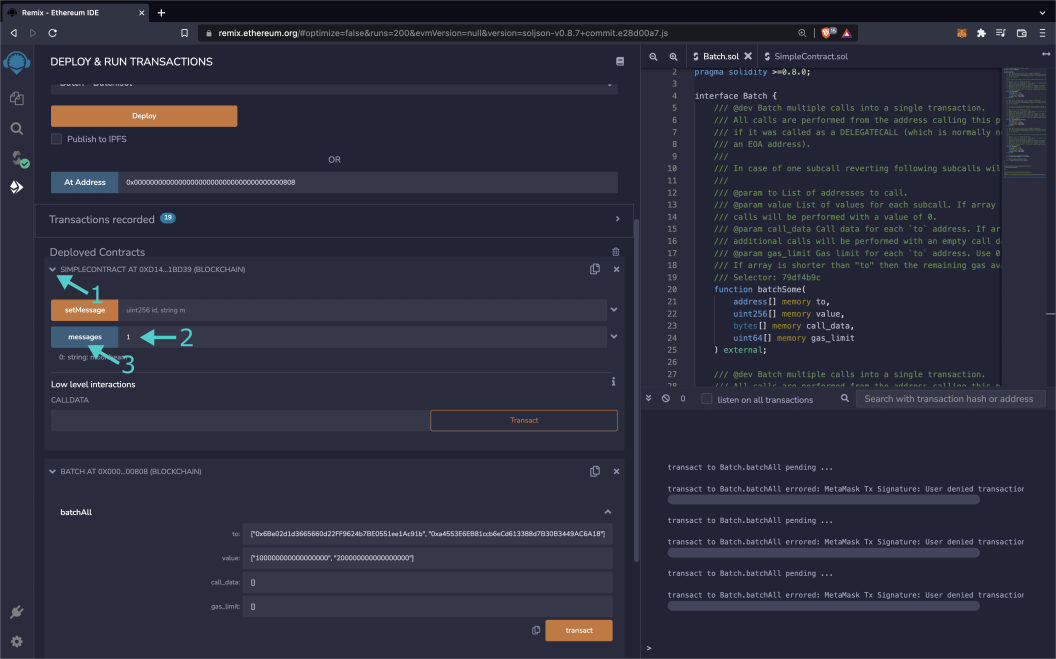 The phrase "moonbeam" should appear underneath it. Congratulations! You have interacted with a function with the batch precompile.

So far, transferring native currency and interacting with functions have been separate, but they can be intertwined.

The following four strings can be combined as inputs for a batch transaction. They will transact 1 DEV to the public Gerald (0x6Be02d1d3665660d22FF9624b7BE0551ee1Ac91b) account, and interact with a predeployed SimpleContract.sol contract twice. Here is a break-down:

There are three subtransactions, so there are three addresses in the to input array. The first is the public Gerald account, the next two are a predeployed SimpleContract.sol contract. You can replace the last two with your own instance of SimpleContract.sol if you wish. Or, replace only one: you can interact with multiple contracts in a single message.

There will also be three values for the value array. The first address in the to input array has to do with sending 1 DEV, so 1 DEV in Wei is within the array. The following two values are 0 because the function that their subtransactions are interacting with do not accept or require native currency.

We will need three values for the callData array. Since transferring native currency does not require call data, the string is simply blank. The second and third values in the array correspond to invokations of setMessage that set messages to ids 5 and 6.

The final input is for gas_input. This array will be left empty to forward all remaining gas to each subtransaction.

Try sending a batched transaction with these inputs in Remix the same way you batched a function call.

And that's it! You've successfully interacted with the ERC-20 precompile using MetaMask and Remix!

If you have followed the Ethers.js tutorial on Moonbeam, you may find it difficult to find the call data for a function. The answer is hidden within Ether's utils.Interface object, where the encodeFunctionData function allows you to input your function name and inputs to receive the resultant call data. Web3js has a similar function, encodeFunctionCall.

The code snippets presented in the following sections are not meant for production environments. Please make sure you adapt it for each use-case.

Afterwards, you should be all set to interact with the batch precompile as one typically would with a contract in Ethers.