Using The Graph on Moonbeam¶

Indexing protocols organize information in a way that applications can access it more efficiently. For example, Google indexes the entire internet to provide information rapidly when you search for something.

The Graph is a decentralized and open-source indexing protocol for querying networks like Ethereum. In short, it provides a way to efficiently store data emitted by events from smart contracts so that other projects or DApps can access it easily.

Furthermore, developers can build APIs, called Subgraphs. Users or other developers can use Subgraphs to query data specific to a set of smart contracts. Data is fetched with a standard GraphQL API. You can visit their documentation to read more about The Graph protocol.

Due to the support of Ethereum tracing modules in Moonbeam, The Graph is capable of indexing blockchain data in Moonbeam. This guide takes you through the creation of a simple subgraph for a Lottery contract on Moonbase Alpha. This guide can be adapted for Moonbeam and Moonriver.

If you're familiar with The Graph and looking to learn how to dive right in on any of the Moonbeam-based networks, you can use the following network configurations for your Subgraph manifest (subgraph.yaml):

To use The Graph on Moonbase Alpha you have two options:

For this example, a simple Lottery contract will be used. You can find the Solidity file in the MoonLotto GitHub repository.

The contract hosts a lottery where players can buy ticket for themselves, or gift one to another user. When 1 hour has passed, if there are 10 participants, the next player that joins the lottery will execute a function that picks the winner. All the funds stored in the contract are sent to the winner, after which a new round starts.

The main functions of the contract are the following:

Events of the Lottery Contract¶

The Graph uses the events emitted by the contract to index data. The lottery contract emits only two events:

This section goes through the process of creating a Subgraph. For the Lottery Subgraph, a GitHub repository was prepared with everything you need to help you get started. The repository also includes the Lottery contract, as well as a Hardhat configuration file and deployment script. If you are not familiar with it, you can check our Hardhat integration guide.

To get started, first clone the repository and install the dependencies:

Now, you can create the TypeScript types for The Graph by running:

Creating the types requires you to have the ABI files specified in the subgraph.yaml file. This sample repository has the file already, but this is usually obtained after compiling the contract. Check the Moonlotto repository for more information.

The codegen command can also be executed using yarn codegen.

For this example, the contract was deployed to 0x44ddD2EC5BE2A7f3e4A465C21600bE8df644093f. You can find more information on how to deploy a contract with Hardhat in our integrations tutorial. Also, the "README" file in the Moonlotto repository has the steps necessary to compile and deploy the contract if required.

In general terms, Subgraphs define the data that The Graph will index from the blockchain and the way it is stored. Subgraphs tend to have some of the following files:

There is no particular order to follow when modifying the files to create a Subgraph.

It is important to outline what data needs to be extracted from the events of the contract before modifying the schema.graphql. Schemas need to be defined considering the requirements of the DApp itself. For this example, although there is no DApp associated with the lottery, four entities are defined:

In short, the schema.graphql should look like the following snippet:

The subgraph.yaml file, or Subgraph's manifest, contains the information related to the smart contract being indexed, including the events which have the data needed to be mapped. That data is then stored by Graph nodes, allowing applications to query it.

Some of the most important parameters in the subgraph.yaml file are:

In short, the subgraph.yaml should look like the following snippet:

Mappings files are what transform the blockchain data into entities defined in the schema file. Each event handler inside the subgraph.yaml file needs to have a subsequent function in the mapping.

The mapping file used for the Lottery example can be found in this link.

In general, the strategy of each handler function is to load the event data, check if an entry already exists, arrange the data as desired, and save the entry. For example, the handler function for the PlayerJoined event is as follows:

If you are going to use The Graph API (hosted service), you need to:

Next, in the terminal you can add your access token and deploy your Subgraph:

All steps can be found in the Graph's documentation for using a Hosted Service to Deploy your Subgraph.

If using a local Graph Node, you can create your Subgraph executing the following code:

Once created, you can deploy your Subgraph by running the following command with the same parameters as before:

The logs from the previous command should look similar to: 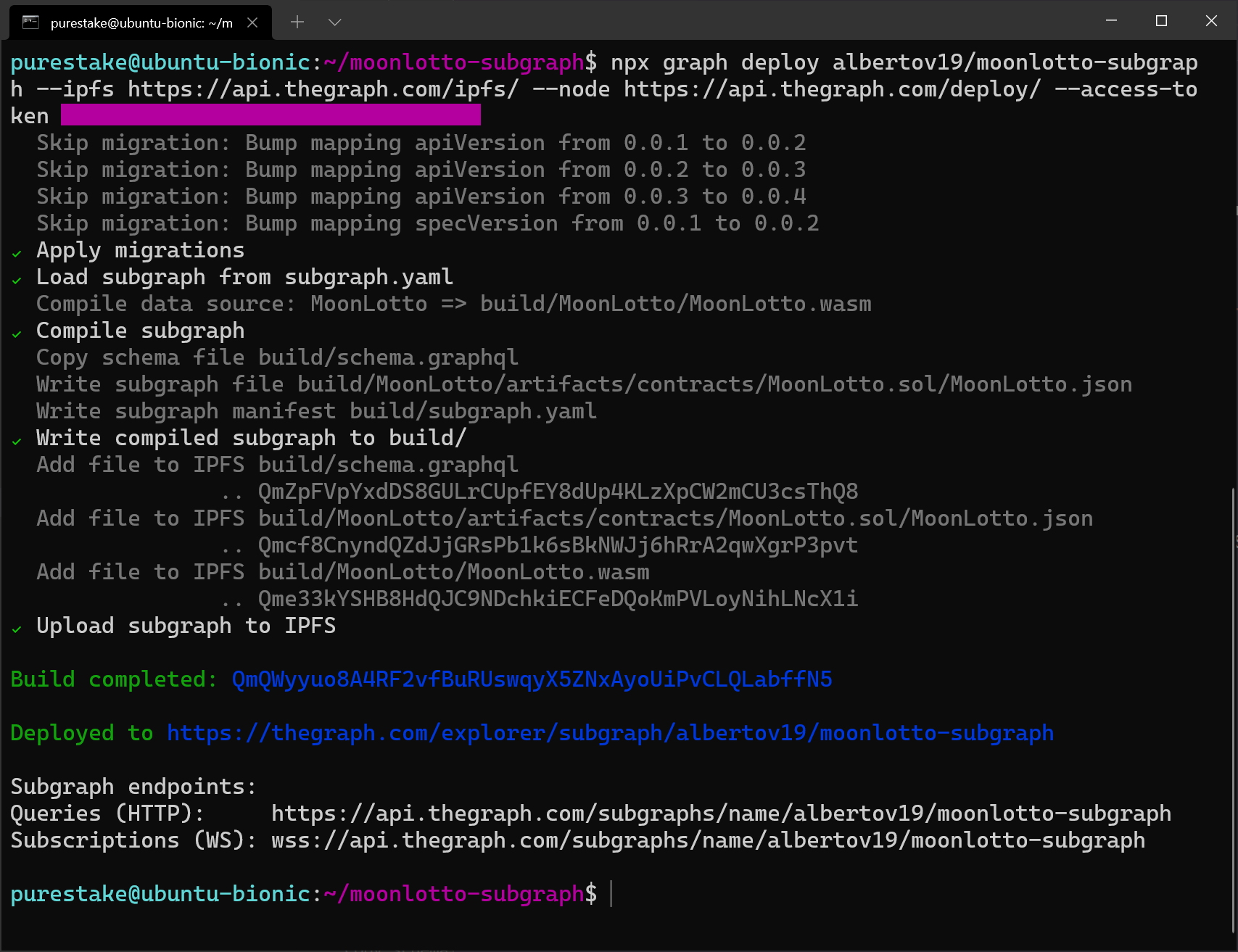 DApps can now use the Subgraph endpoints to fetch the data indexed by The Graph protocol.