Getting Started with a Moonbeam Development Node¶

This guide outlines the steps needed to create a development node for testing the Ethereum compatibility features of Moonbeam.

This tutorial was created using the v0.28.1 tag of Moonbase Alpha. The Moonbeam platform and the Frontier components it relies on for Substrate-based Ethereum compatibility are still under very active development. The examples in this guide assumes you have a MacOS or Ubuntu 18.04-based environment and will need to be adapted accordingly for Windows.

A Moonbeam development node is your own personal development environment for building and testing applications on Moonbeam. For Ethereum developers, it is comparable to Ganache. It enables you to get started quickly and easily without the overhead of a relay chain. You can spin up your node with the --sealing option to author blocks instantly, manually, or at a custom interval after transactions are received. By default a block will be created when a transaction is received, which is similar to Ganache's instamine feature.

If you follow to the end of this guide, you will have a Moonbeam development node running in your local environment, with 10 pre-funded accounts, and will be able to connect it to the default Polkadot.js GUI.

There are two ways to get started running a Moonbeam node: you can use Docker to run a pre-built binary or you can compile the binary locally and set up a development node yourself. Using Docker is a quick and convenient way to get started as you won't have to install Substrate and all the dependencies, and you can skip the building the node process as well. It does require you to install Docker. On the other hand, if you decide you want to go through the process of building your own development node, it could take roughly 30 minutes or longer to complete depending on your hardware.

Using Docker enables you to spin up a node in a matter of seconds. Once you have Docker installed, then you can execute the following command to download the corresponding image:

Once the Docker image is downloaded, the next step is to run the image.

You can run the Docker image using the following:

This should spin up a Moonbeam development node in instant seal mode for local testing, so that blocks are authored instantly as transactions are received. If successful, you should see an output showing an idle state waiting for blocks to be authored: 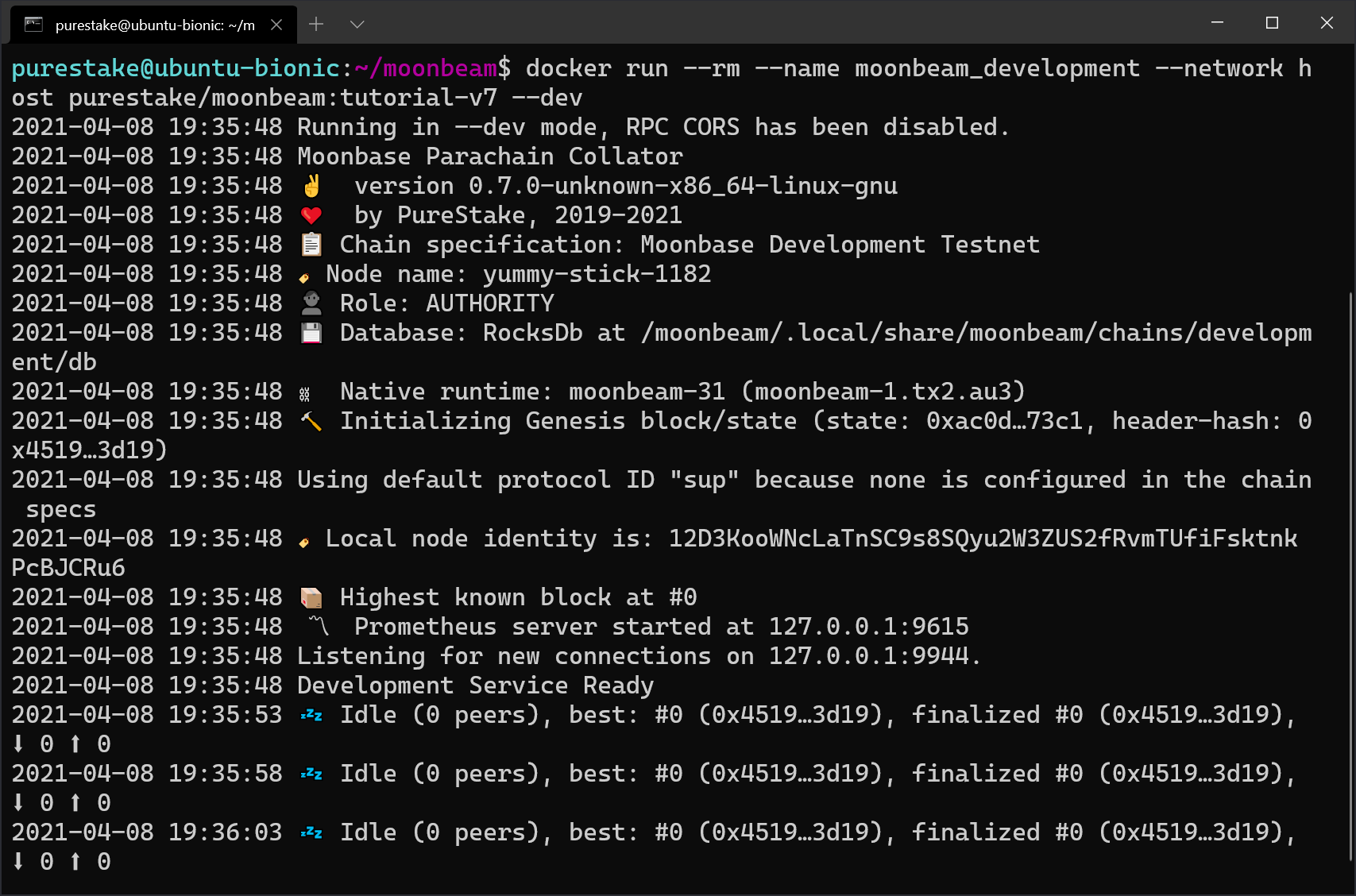 For more information on some of the flags and options used in the example, check out Flags and Options. If you want to see a complete list of all of the flags, options, and subcommands, open the help menu by running:

To continue on with the tutorial, the next section is not necessary as you've already spun up a node with Docker. You can skip ahead to Connecting Polkadot.js Apps to a Local Moonbeam Node.

Getting Started with the Binary File¶

If you know what you are doing, you can directly download the precompiled binaries attached to each release on the Moonbeam-release page. These will not work in all systems. For example, the binaries only work with x86-64 Linux with specific versions of dependencies. The safest way to ensure compatibility is to compile the binary in the system where it will be run from.

First, start by cloning a specific tag of the Moonbeam repo that you can find here:

If you already have Rust installed, you can skip the next two steps. Otherwise, install Rust and its prerequisites via Rust's recommended method by executing:

Next, update your PATH environment variable by running:

The initial build will take a while. Depending on your hardware, you should expect approximately 30 minutes for the build process to finish.

Here is what the tail end of the build output should look like: 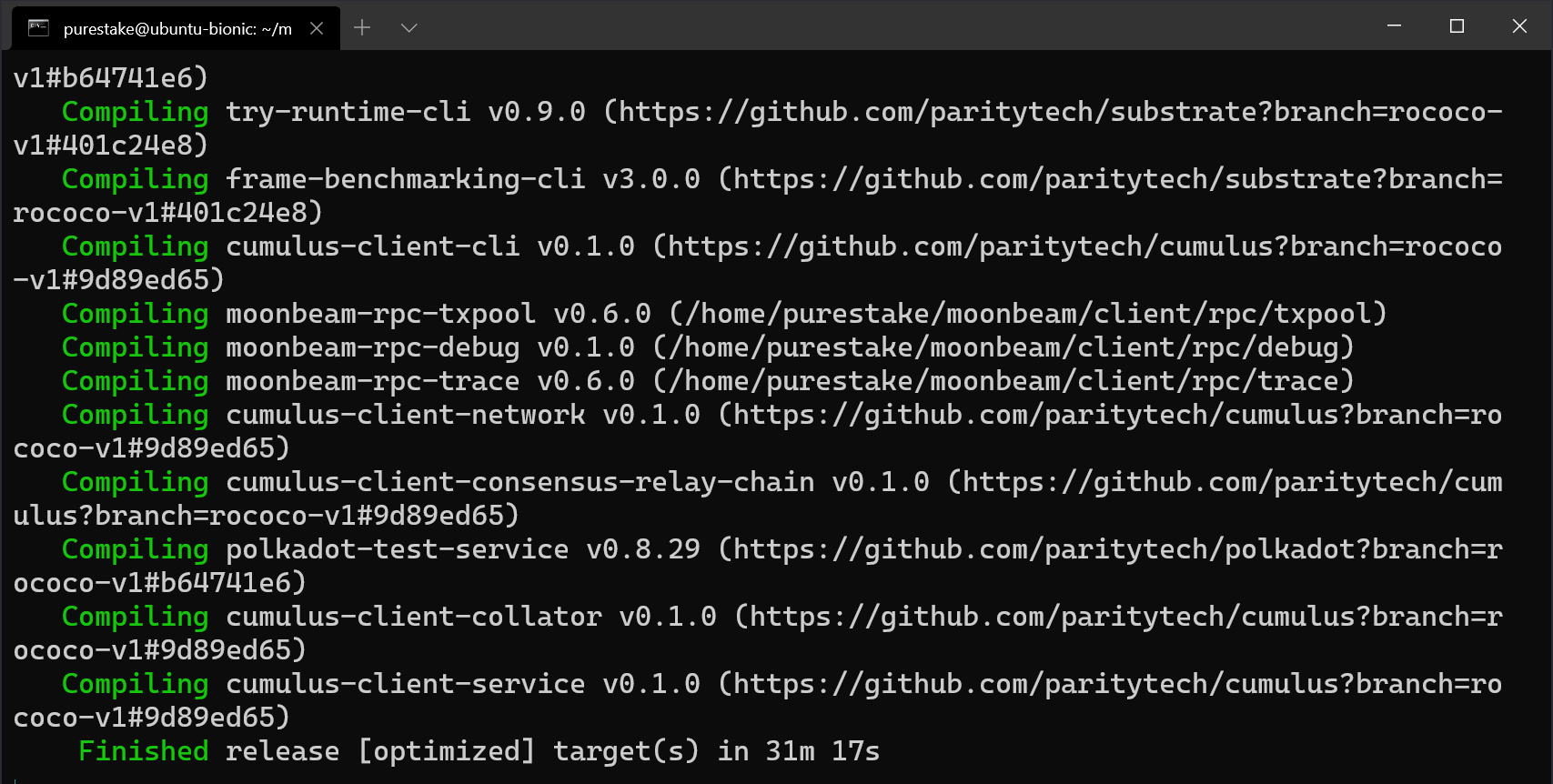 Then, you will want to run the node in dev mode using the following command:

For people not familiar with Substrate, the --dev flag is a way to run a Substrate-based node in a single node developer configuration for testing purposes. You can learn more about --dev in this Substrate tutorial.

You should see an output that looks like the following, showing an idle state waiting for blocks to be produced: 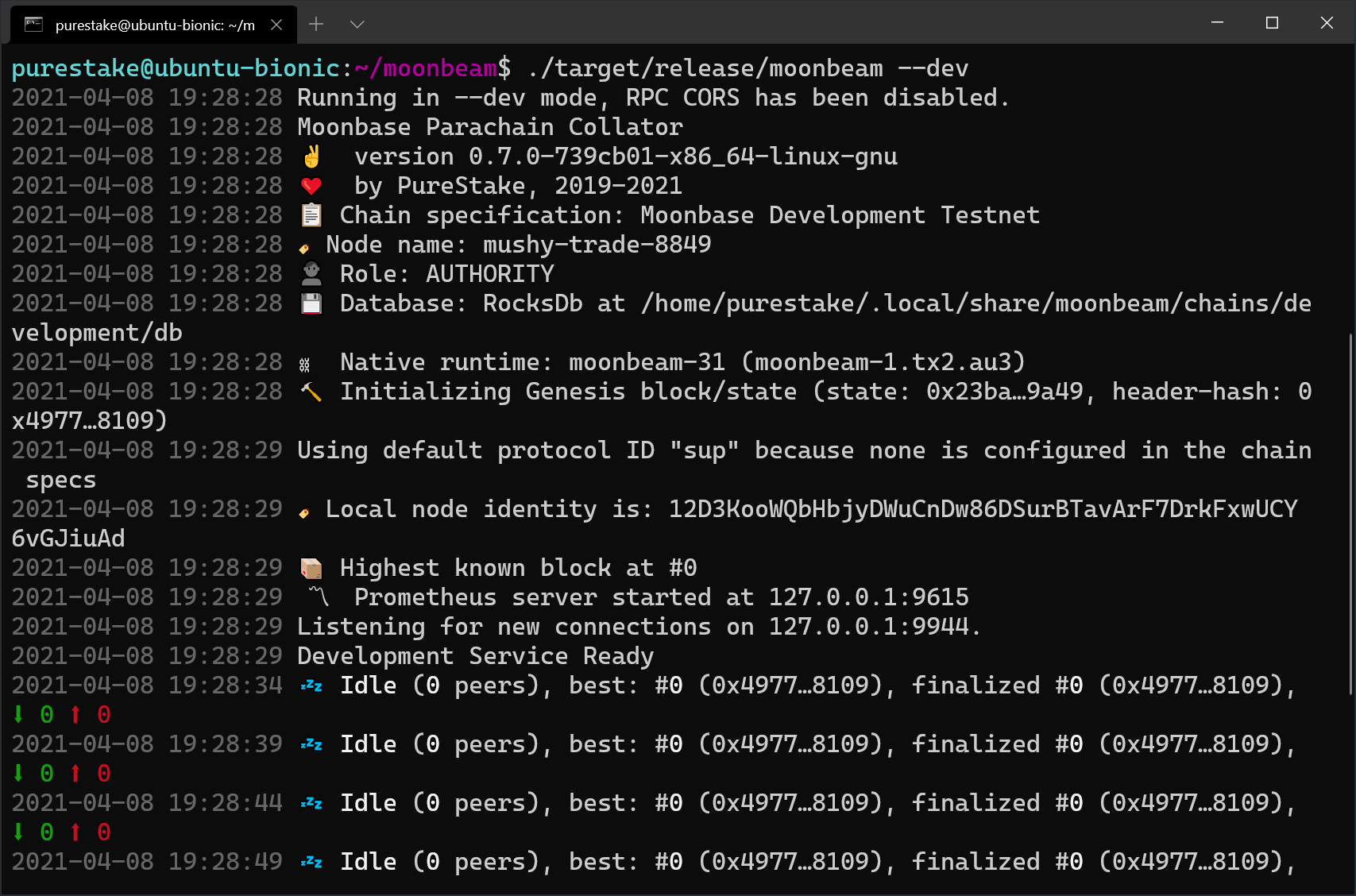 For more information on some of the flags and options used in the example, check out Flags and Options. If you want to see a complete list of all of the flags, options, and subcommands, open the help menu by running:

The development node is a Substrate-based node, so you can interact with it using standard Substrate tools. The two provided RPC endpoints are:

Start by connecting to it with Polkadot.js Apps. Open a browser to: https://polkadot.js.org/apps/#/explorer. This will open Polkadot.js Apps, which automatically connects to Polkadot MainNet. 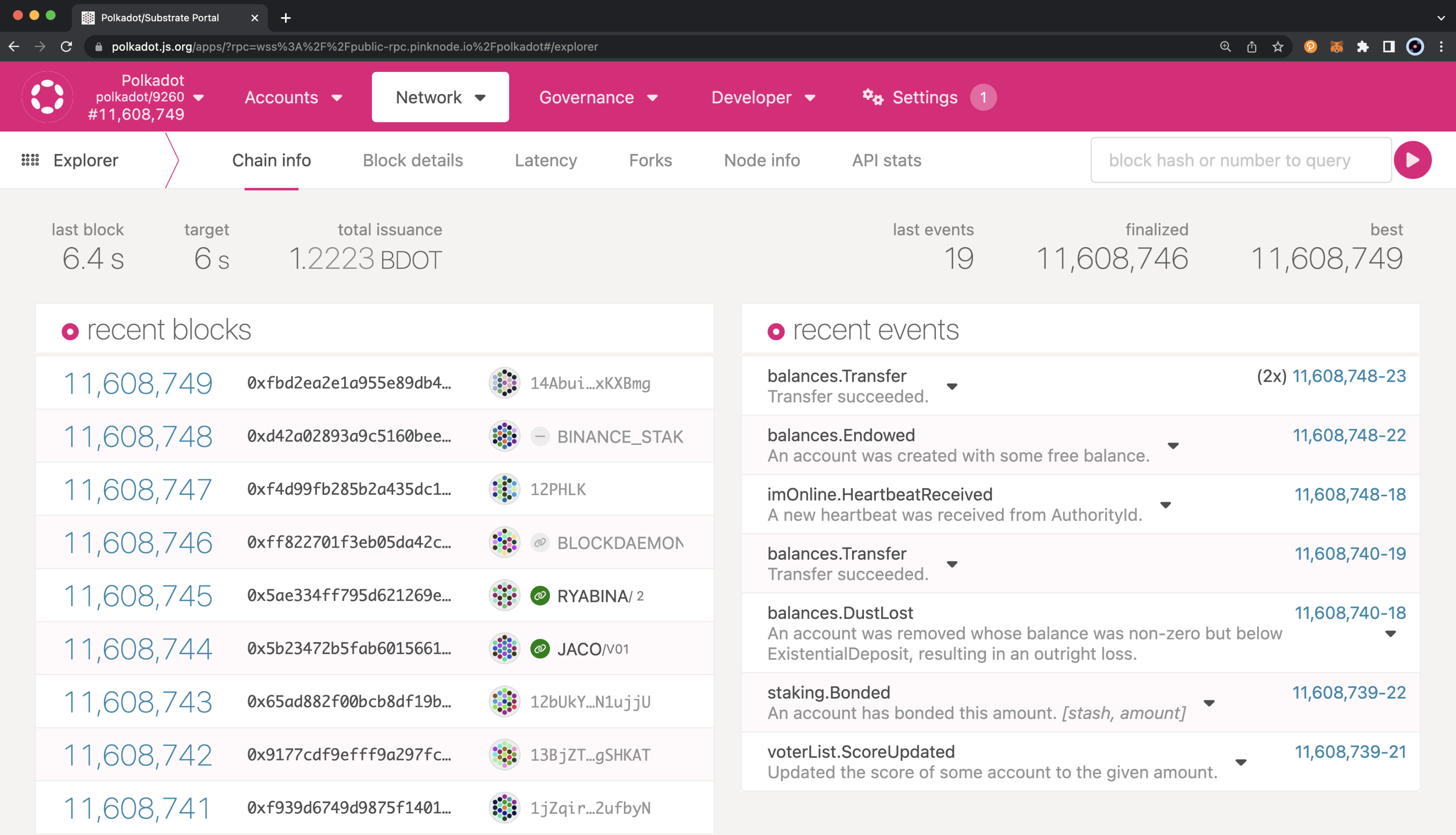 Click on the top left corner to open the menu to configure the networks, then take the following steps:

With Polkadot.js Apps connected, you will see the Moonbeam development node waiting for transactions to arrive to begin producing blocks.

Moonbeam has a unified accounts system, which enables users to have an Ethereum-styled H160 account that can interact with the Substrate API and the Ethereum API. As a result, you can check the balance of your account through Polkadot.js Apps or MetaMask.

When running a node via the binary file, data is stored in a local directory typically located in ~/.local/shared/moonbeam/chains/development/db. If you want to start a fresh instance of the node, you can either delete the content of the folder, or run the following command inside the moonbeam folder:

This will remove the data folder, note that all chain data is now lost. To learn more about all of the available purge-chain commands, you can checkout the Purging Binary Data section of our documentation.

If you spun up your node using Docker along with the -v flag to specify a a mounted directory for your container, you will need to purge that directory. To do so, you can run the following command:

If you followed the instructions in this guide and did not use the -v flag, you can stop and remove the Docker container. The associated data will be removed along with it. To do so, you can run the following command:

Flags do not take an argument. To use a flag, add it to the end of a command. For example:

Options accept an argument to the right side of the option. For example:

For a complete list of flags and options, spin up your Moonbeam development node with --help added to the end of the command.

You can also gain access to some non-standard RPC methods by running a tracing node, which allow developers to inspect and debug transactions during runtime. Tracing nodes use a different Docker image than a standard Moonbeam development node.

Your Moonbeam development node comes with ten pre-funded accounts for development. The addresses are derived from Substrate's canonical development mnemonic:

Checkout the Using MetaMask section to get started interacting with your accounts.

Also, included with the development node is a prefunded account used for testing purposes:

For a Moonbeam development node, you can use any of the following block explorers: