Substrate API Sidecar allows applications to access blocks, account balance, and other information of Substrate-based blockchains through a REST API. This can be useful for exchanges, wallets or other types of applications that need to keep track of account balance and other state changes on a Moonbeam network. This page will describe how to install and run a Substrate API Sidecar for Moonbeam, and the commonly used API endpoints.

Running this service locally through NPM requires Node.js to be installed.

We need to install Node.js (we'll use v15.x) and the npm package manager. You can download directly from Node.js or in your terminal:

We can verify that everything is installed correctly by querying the version for each package:

To install the Substrate API Sidecar service in the current directory, run this from the command line:

Substrate API Sidecar v11.3.9 is the current stable version that has been tested to work with Moonbeam networks. You can verify the installation was successful by typing from the installation directory root:

Setting up the Substrate API Sidecar¶

In the terminal that Sidecar will run, export the environmental variable for the WS endpoint of the network. Examples:

And it should display the network endpoint you have just set.

With the network endpoint environmental variable set, and from the installation directory root, run:

If the installation and configuration are successful, you should see this output in the console: 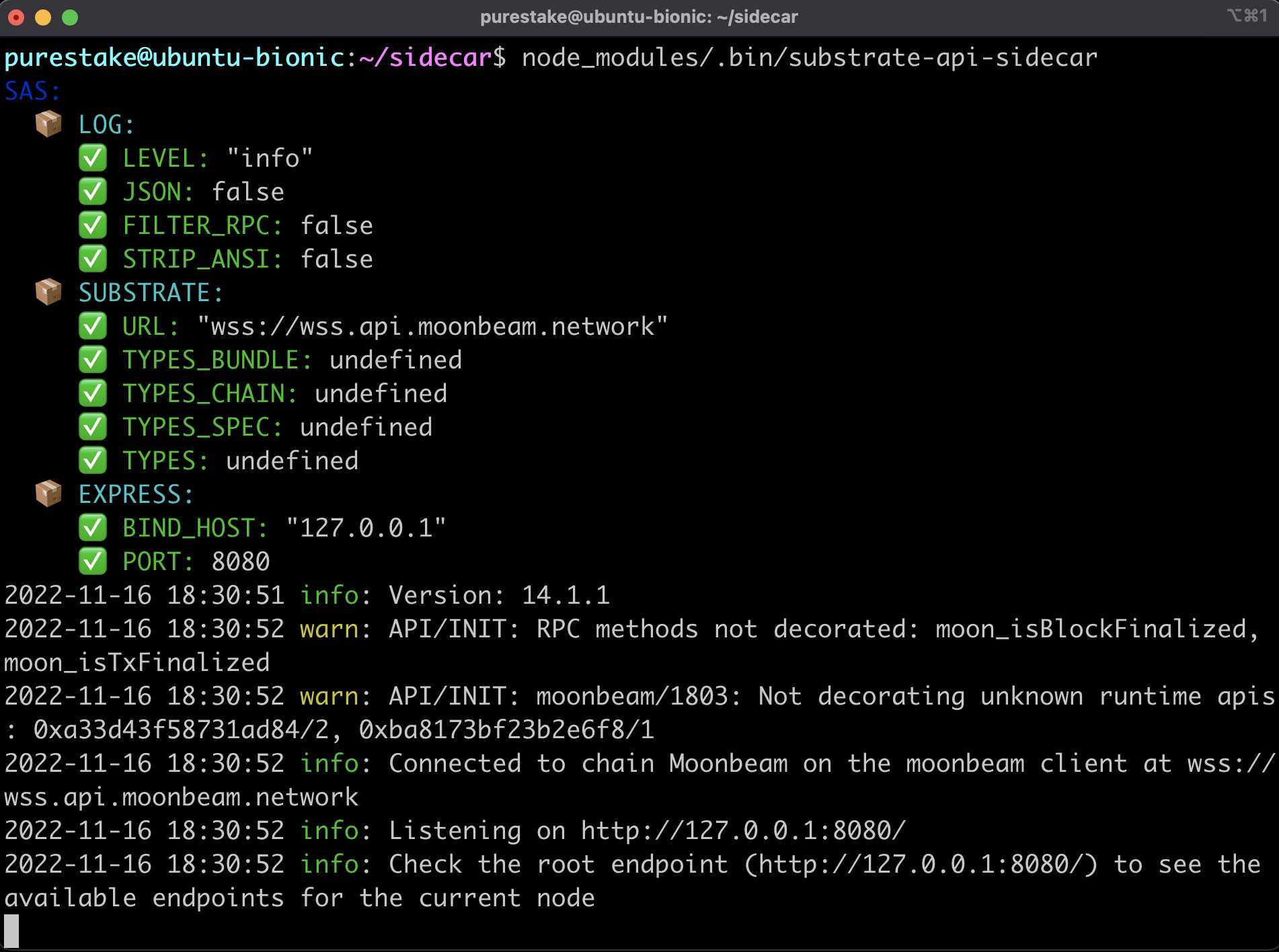 Some of the commonly used Substrate API Sidecar endpoints include:

For a full list of API endpoints available on Substrate API Sidecar, please refer to the official documentation.

Substrate API Sidecar returns Moonbeam blocks as a JSON object. Information related to EVM execution of Moonbeam transactions is under the extrinsics top level field, where individual extrinsics are organized numerically as nested JSON objects. The nesting structure is as following:

Moonbeam EVM transactions can be identify by the method field under the current extrinsic object, where it is set to:

For more information on the new EIP1559 and EIP2930 transaction types and what each field means, please refer to the respective official Ethereum proposal specs.

To obtain the EVM sender address, recipient address, and EVM hash of any EVM transaction type, check the events field under the current extrinsic object, and identify the event where the method field is set to:

The EVM field mappings are then summarized as the following:

To calculate the gas spent or used during EVM execution of the transaction, the following formula can be used:

The values of Gas Price and Max Priority Fee Per Gas for the applicable transaction types can be read from the block according to the above table.

The Base Fee, introduced in EIP 1559, is determined by the network itself. The Base Fee for EIP1559 type transactions is currently static on Moonbeam networks and has the following assigned value:

Transaction Weight is a Substrate mechanism used to manage the time it takes to validate a block. For all transactions types, Transaction Weight can be retrieved under the event of the relevant extrinsic where the method field is set to:

And then Transaction Weight is mapped to the following field of the block JSON object: