Moonbeam supports events subscription for Ethereum-style events. This allows you to wait for events and handle them accordingly instead of polling for them.

In this guide, you will learn how to subscribe to event logs, incoming pending transactions, and incoming block headers on Moonbase Alpha. This guide can also be adapted for Moonbeam or Moonriver.

The examples in this guide are based on an Ubuntu 18.04 environment. You will also need the following:

You need to install Node.js (for this example, you can use v16.x) and the npm package manager. You can download directly from Node.js or in your terminal:

You can verify that everything is installed correctly by querying the version for each package:

As of writing this guide, the versions used were 14.6.0 and 6.14.6, respectively. You will also need to install the Web3 package by executing:

To verify the installed version of Web3, you can use the ls command:

Any contract that follows the ERC-20 token standard emits an event related to a transfer of tokens, that is, event Transfer(address indexed from, address indexed to, uint256 value). For this example, you will subscribe to the logs of such events. Using the Web3.js library, you need the following piece of code:

Note that you are connecting to the WebSocket endpoint of Moonbase Alpha. You're using the web3.eth.subscribe(‘logs’, options [, callback]) method to subscribe to the logs, filtered by the given options. In this case, the options are the contract’s address where the events are emitted from and the topics used to describe the event. More information about topics can be found in the Understanding event logs on the Ethereum blockchain Medium post. If no topics are included, you subscribe to all events emitted by the contract. In order to only filter the Transfer event, you need to include the signature of the event, calculated as:

The result of the calculation is shown in the previous code snippet. You'll return to filtering by topics later on. The rest of the code handles the callback function. Once you execute this code, you'll get a subscription ID, and the terminal will wait for any event through that subscription:

Next, an ERC-20 token transfer will be sent with the following parameters:

The target event sends two pieces of indexed information: the from and to addresses (in that order), which are treated like topics. The other piece of data shared by the event is the number of tokens, which is not indexed. Therefore, there is a total of three topics (the maximum is four), which correspond to the opcode LOG3:

Unindexed data is returned in the data field of the logs, but this is encoded in bytes32/hex. To decode it you can use, for example, this Web3 Type Converter tool, and verify that the data is in fact 1 (plus 18 zeros).

If the event returns multiple unindexed values, they will be appended one after the other in the same order the event emits them. Therefore, each value is then obtained by deconstructing data into separate 32 bytes (or 64 hex character long) pieces.

Use Wildcards and Conditional Formatting¶

In the v2 release that introduced the subscribing to logs feature, there were some limitations regarding using wildcards and conditional formatting for the topics. Nevertheless, with the release of Moonbase Alpha v3, this is now possible.

Using the same example as in the previous section, lets subscribe to the events of the token contract with the following code:

Here, by using the wildcard null in place for the event signature, you'll filter to listen to all events emitted by the contract that you subscribed to. But with this configuration, you can also use a second input field (topic_1) to define a filter by address as mentioned before. In the case of this subscription, you are notifying that you want to only receive events where topic_1 is one of the addresses you are providing. Note that the addresses need to be in H256 format. For example, the address 0x44236223aB4291b93EEd10E4B511B37a398DEE55 needs to be entered as 0x00000000000000000000000044236223aB4291b93EEd10E4B511B37a398DEE55. As before, the output of this subscription will display the event signature in topic_0 to tell you which event was emitted by the contract. 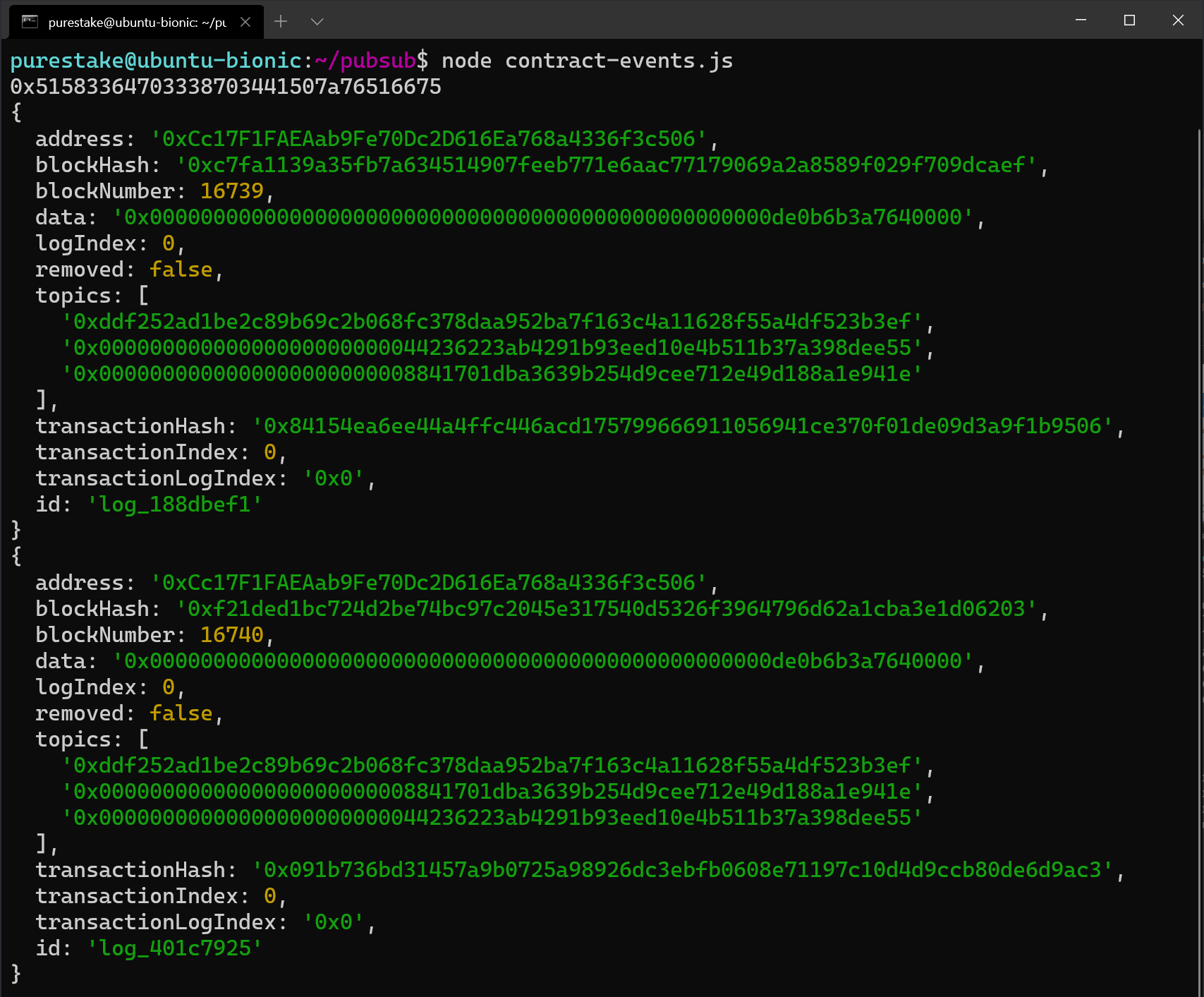 As shown, after you provided the two addresses with conditional formatting, you should have received two logs with the same subscription ID. Events emitted by transactions from different addresses will not throw any logs to this subscription.

This example showed how you could subscribe to just the event logs of a specific contract, but the Web3.js library provides other subscription types that will be covered in the following sections.

In order to subscribe to pending transactions, you can use the web3.eth.subscribe(‘pendingTransactions’, [, callback]) method, implementing the same callback function to check for the response. This is much simpler than the previous example, and it returns the transaction hash of the pending transactions.

You can verify that this transaction hash is the same as that shown in MetaMask (or Remix).

Another type available under the Web3.js library is to subscribe to new block headers. To do so, you can use the web3.eth.subscribe('newBlockHeaders' [, callback]) method, implementing the same callback function to check for the response. This subscription provides incoming block headers and can be used to track changes in the blockchain. 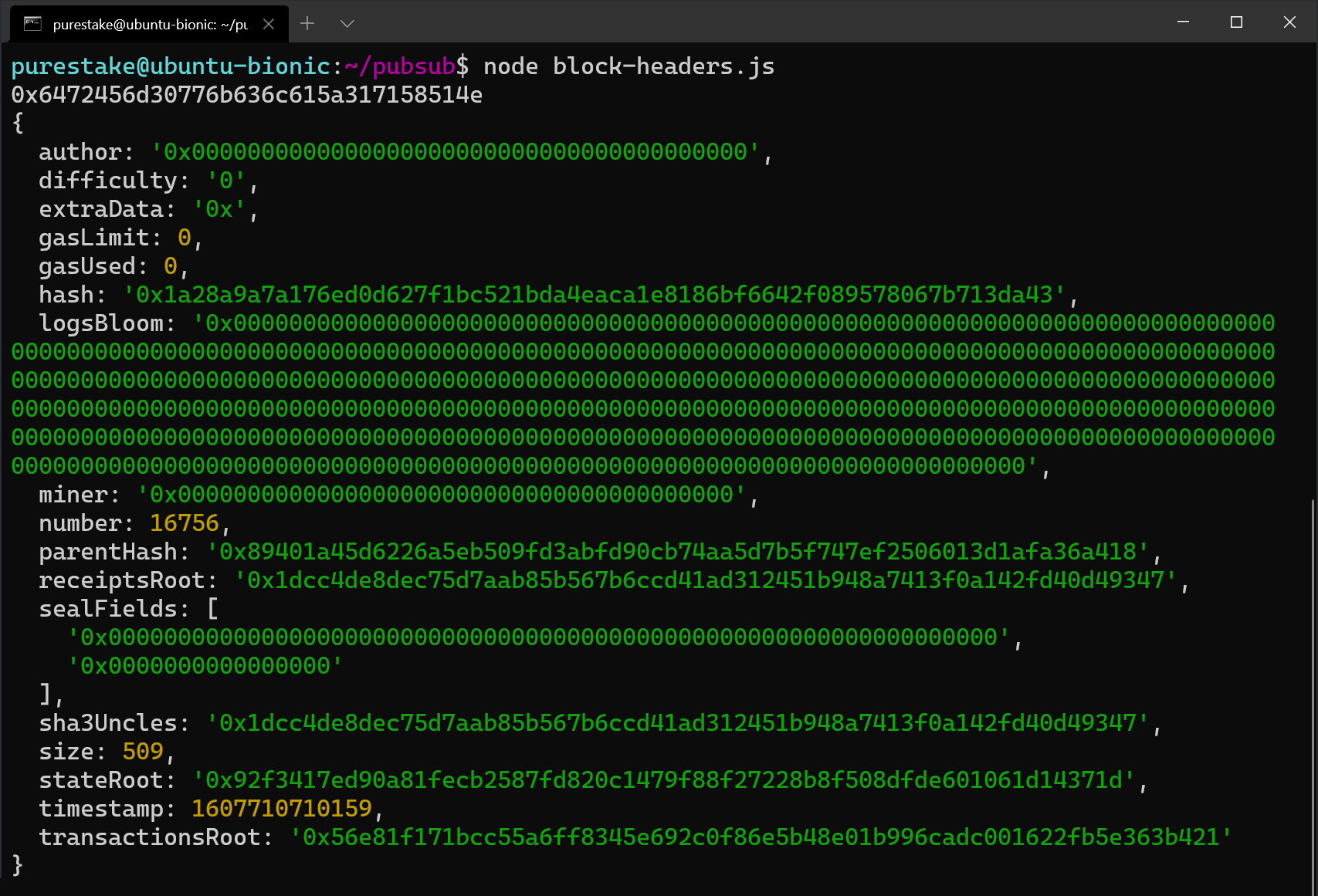 Note that only one block header is shown in the image. These messages are displayed for every block produced so they can fill up the terminal quite fast.

Check if a Node is Synchronized with the Network¶

With pub/sub it is also possible to check whether a particular node you are subscribed to is currently synchronizing with the network. For that, we can leverage the web3.eth.subscribe(‘syncing' [, callback]) method, implementing the same callback function to check for the response. This subscription will either return a boolean when syncing is false, or an object describing the syncing progress when syncing is true, as seen below.

The pub/sub implementation in Frontier is still in active development. This current version allows users to subscribe to specific event types, but there may still be some limitations.