Using Truffle to Deploy to Moonbeam¶

This guide walks through the process of deploying a Solidity-based smart contract to a Moonbeam node using Truffle, a commonly used development tool for smart contracts on Ethereum. Given Moonbeam’s Ethereum compatibility features, Truffle can be used directly with any of the Moonbeam networks.

To test out the examples in this guide on Moonbeam or Moonriver, you will need to have your own endpoint and API key which you can get from one of the supported Endpoint Providers.

To use the Moonbeam Truffle plugin, you will need to have Docker installed.

For the following examples, you don't need to have Truffle globally installed, as it is included as a dependency in the Moonbeam Truffle box. However, if you want to use the truffle commands directly instead of running npx truffle or ./node_modules/.bin/truffle, you can globally install it by running:

To get started with the Moonbeam Truffle box, you can take the following steps:

If you look inside of the moonbeam-truffle-box directory, you'll find the following notable directories and files:

Using the Moonbeam Truffle Plugin to Run a Node¶

Now that you have created a simple Truffle project, you can spin up a local Moonbeam development node to deploy the contract to. The Moonbeam Truffle plugin provides a way to get started with a development node quickly by using Docker under the hood.

To start a Moonbeam development node in your local environment, you need to:

Once you are finished using your Moonbeam development node, you can run the following lines to stop it and remove the Docker image if that is the case:

You also have the option to pause and unpause your Moonbeam development node:

You can see the output of these commands in the following image: 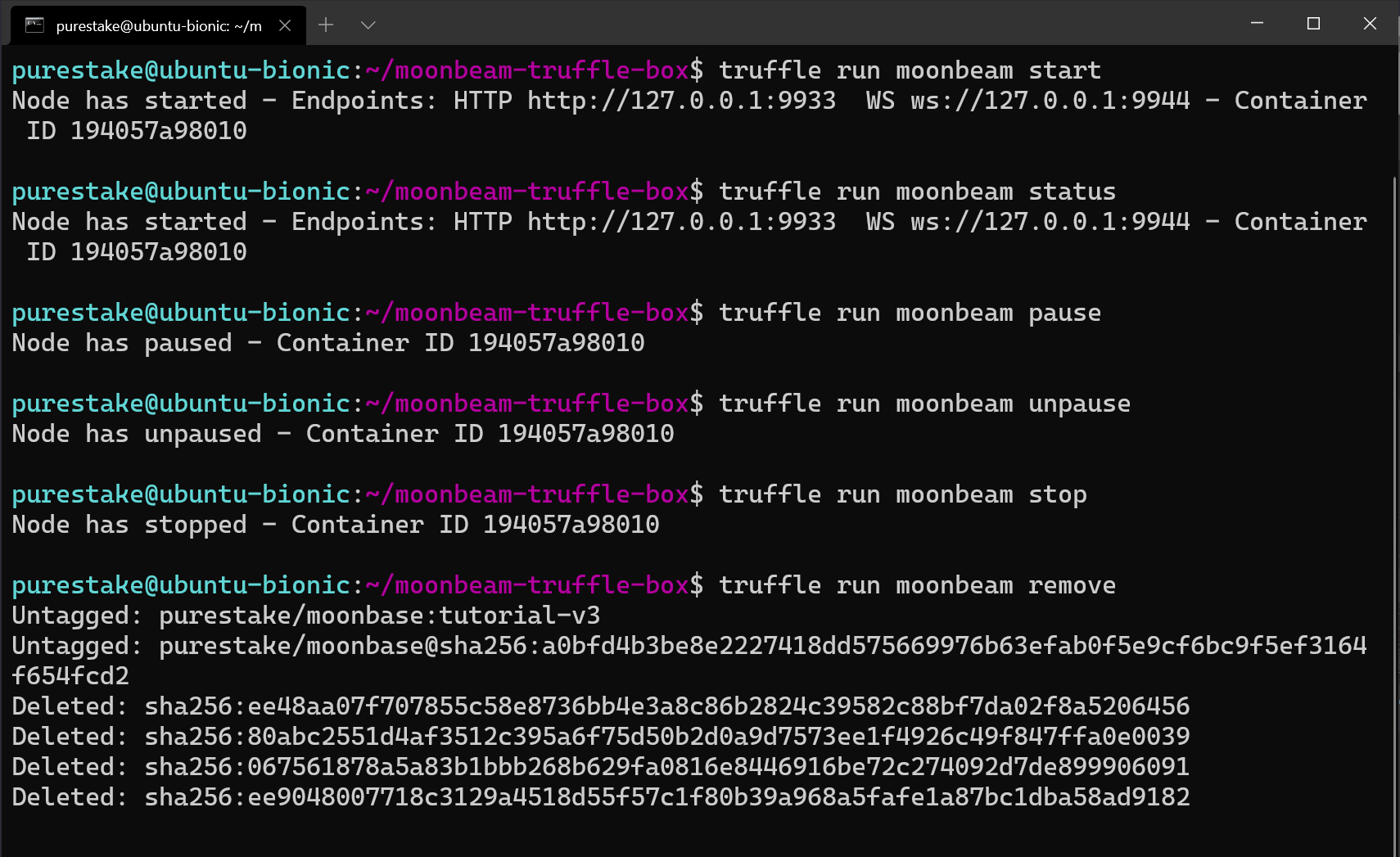 If you are familiar with Docker, you can skip the plugin commands and interact with the Docker image directly.

The Truffle configuration file already includes everything you need to get started and deploy a contract to your local Moonbeam development node. Open the truffle-config.js file and review the following details:

For the purpose of this guide, some of the configuration file was removed from the above example.

If you're adapting this guide for Moonbeam, Moonriver, or Moonbase Alpha, you will need to update the configuration file with the appropriate network. To configure your project for Moonbeam or Moonriver, you will need to have your own endpoint and API key which you can get from one of the supported Endpoint Providers. You'll also need to update the private key to one that has funds on that network:

Under the contracts directory, you'll find an ERC-20 token contract, called MyToken, that mints a given amount of tokens to the contract owner:

This is a simple ERC-20 contract based on the OpenZepplin ERC-20 contract template. It creates MyToken which has MYTOK as the symbol and the standard 18 decimal places. Furthermore, it assigns the created initial token supply to the contract creator.

Truffle uses a concept called migrations. Migrations are JavaScript files that help you deploy contracts to the network.

This script imports the MyToken contract artifact which is created when you compile the contract. It is then used to deploy the contract with any initial constructor values.

Before you can deploy your contracts, you must compile them. As a reminder, you will be deploying the Migrations.sol contract first using the migrations/1_initial_migration.js script. This will enable you to use Truffle's migration feature. You can take the following steps to compile and deploy your contract:

Ganache is part of the Truffle suite of development tools and is your own personal blockchain for local development and testing. You can use Ganache to fork Moonbeam, which will simulate the live network locally, enabling you to interact with already deployed contracts on Moonbeam in a local test environment.

There are some limitations to be aware of when forking with Ganache. Since Ganache is based on an EVM implementation, you cannot interact with any of the Moonbeam precompiled contracts and their functions. Precompiles are a part of the Substrate implementation and therefore cannot be replicated in the simulated EVM environment. This prohibits you from interacting with cross-chain assets on Moonbeam and Substrate-based functionality such as staking and governance.

From your Truffle project, you can install Ganache CLI by running:

Then you can add a script to run Ganache forking in your package.json file:

When you spin up the forked instance, you'll have 10 development accounts that are pre-funded with 1,000 test tokens. The forked instance is available at http://127.0.0.1:8545/. The output in your terminal should resemble the following: 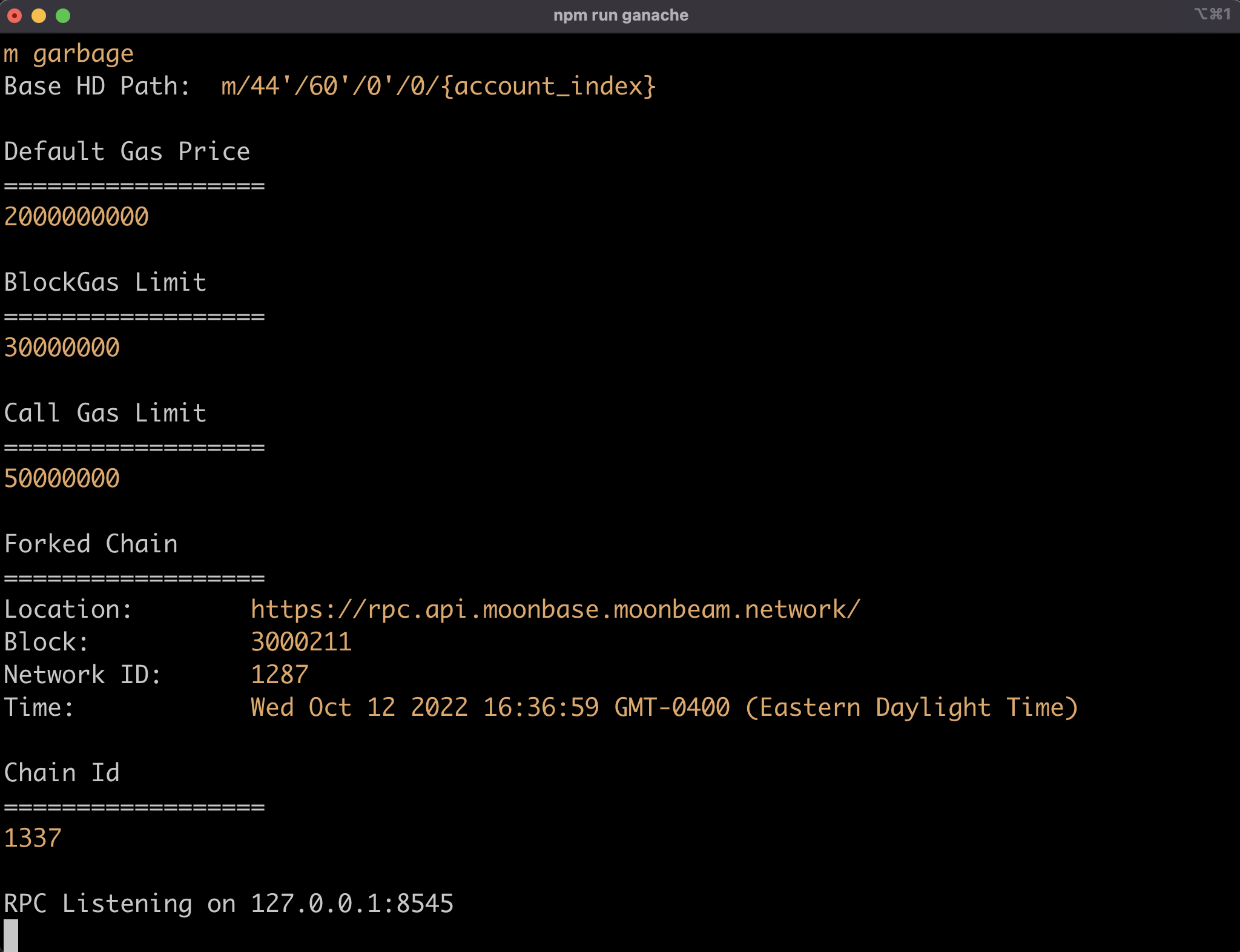 To verify you have forked the network, you can query the latest block number:

If you convert the result from hex to decimal, you should get the latest block number from the time you forked the network. You can cross reference the block number using a block explorer.

From here you can deploy new contracts to your forked instance of Moonbeam or interact with contracts already deployed by creating a local instance of the deployed contract.

To interact with an already deployed contract, you can create a new script in the scripts directory using Ethers.js or Web3.js. First, you'll need to install the JavaScript library of your choice:

Then you can create a new script to access a live contract on the network:

To run the script, you can use the following command: