Using Foundry to Deploy To Moonbeam¶

Foundry is an Ethereum development environment written in Rust that helps developers manage dependencies, compile projects, run tests, deploy contracts, and interact with blockchains from the command line. Foundry can directly interact with Moonbeam's Ethereum API so it can be used to deploy smart contracts into Moonbeam.

There are three tools that make up Foundry:

This guide will cover how to use Foundry to compile, deploy, and debug Ethereum smart contracts on the Moonbase Alpha TestNet. This guide can also be adapted for Moonbeam, Moonriver, or a Moonbeam development node.

To get started, you will need the following:

You will need to create a Foundry project if you don't already have one. You can create one by completing the following steps:

With the default project created, you should see three folders.

In addition to these three folders, a git project will also be created along with a prewritten .gitignore file with relevant file types and folders ignored.

The src folder may already contain Contract.sol, a minimal Solidity contract. Feel free to delete it. Instead, you will be deploying an ERC-20 contract. In the contracts directory, you can create the MyToken.sol file:

Open the file and add the following contract to it:

Before you attempt to compile, install OpenZeppelin contracts as a dependency. You may have to commit previous changes to git beforehand. By default, Foundry uses git submodules instead of npm packages, so the traditional npm import path and command are not used. Instead, use the name of OpenZeppelin's Github repository:

Once all dependencies have been installed, you can compile the contract:

After compilation, two folders will be created: out and cache. The ABI and bytecode for your contracts will be contained within the out folder. These two folders are already ignored by the .gitignore included in the default Foundry project initialization.

After a few seconds, the contract is deployed, and you should see the address in the terminal.

Congratulations, your contract is live! Save the address, as you will use it to interact with this contract instance in the next step.

Try to retreive your token's name using cast, where YOUR_CONTRACT_ADDRESS is the address of the contract that you deployed in the previous section:

You should get this data in hexidecimal format:

This is far from readable, but you can use cast to convert it into your desired format. In this case, the data is text, so you can convert it into ascii characters to see "My Token":

You can also mutate data with cast as well. Try burning tokens by sending them to the zero address.

The transaction will be signed by your Moonbase account and be broadcasted to the network. The output should look similar to: 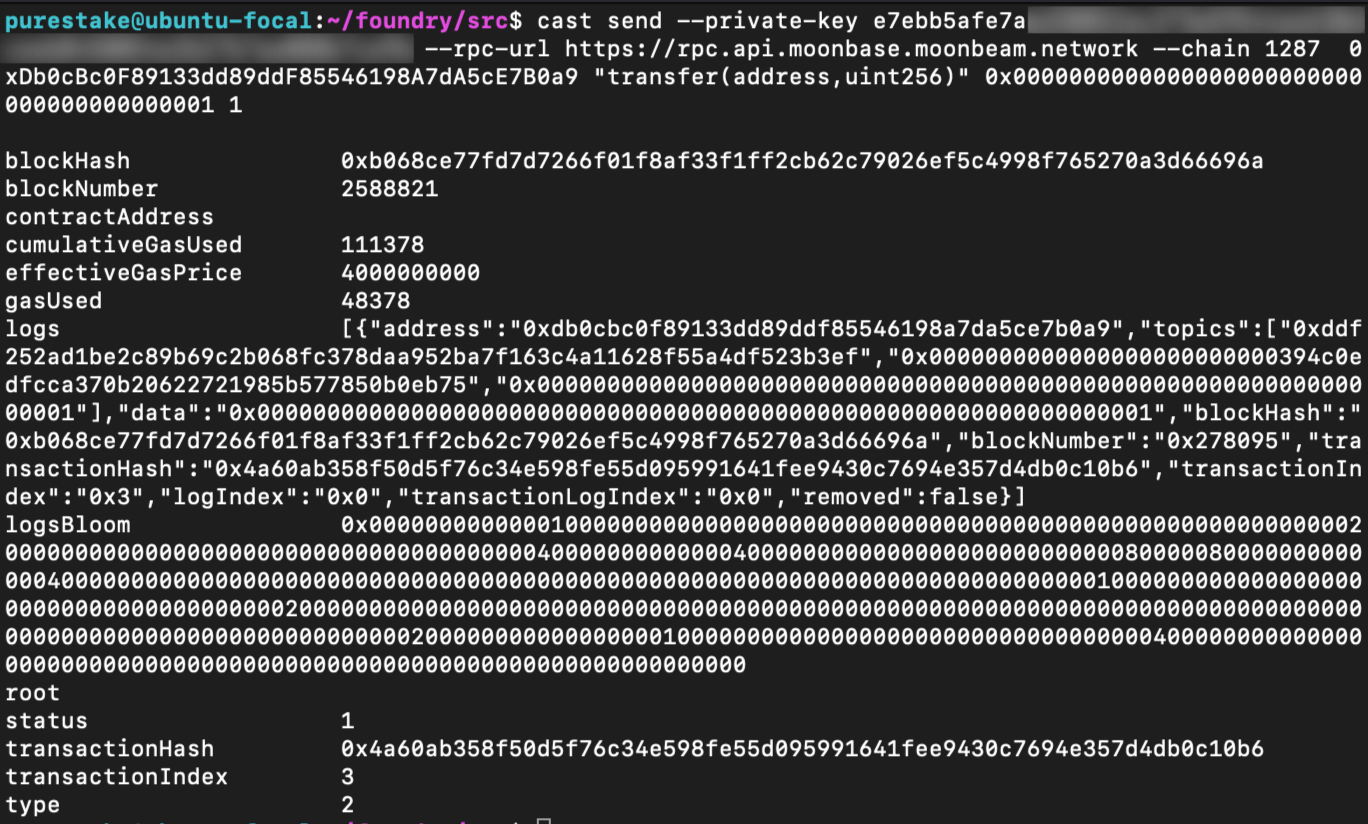 Congratulations, you have successfully deployed and interacted with a contract using Foundry!

As previously mentioned, Anvil is a local TestNet node for development purposes that can fork preexisting networks. Forking Moonbeam allows you to interact with live contracts deployed on the network.

There are some limitations to be aware of when forking with Anvil. Since Anvil is based on an EVM implementation, you cannot interact with any of the Moonbeam precompiled contracts and their functions. Precompiles are a part of the Substrate implementation and therefore cannot be replicated in the simulated EVM environment. This prohibits you from interacting with cross-chain assets on Moonbeam and Substrate-based functionality such as staking and governance.

To fork Moonbeam or Moonriver, you will need to have your own endpoint and API key which you can get from one of the supported Endpoint Providers.

To fork Moonbeam from the command line, you can run the following command from within your Foundry project directory:

Your forked instance will have 10 development accounts that are pre-funded with 10,000 test tokens. The forked instance is available at http://127.0.0.1:8545/. The output in your terminal should resemble the following: 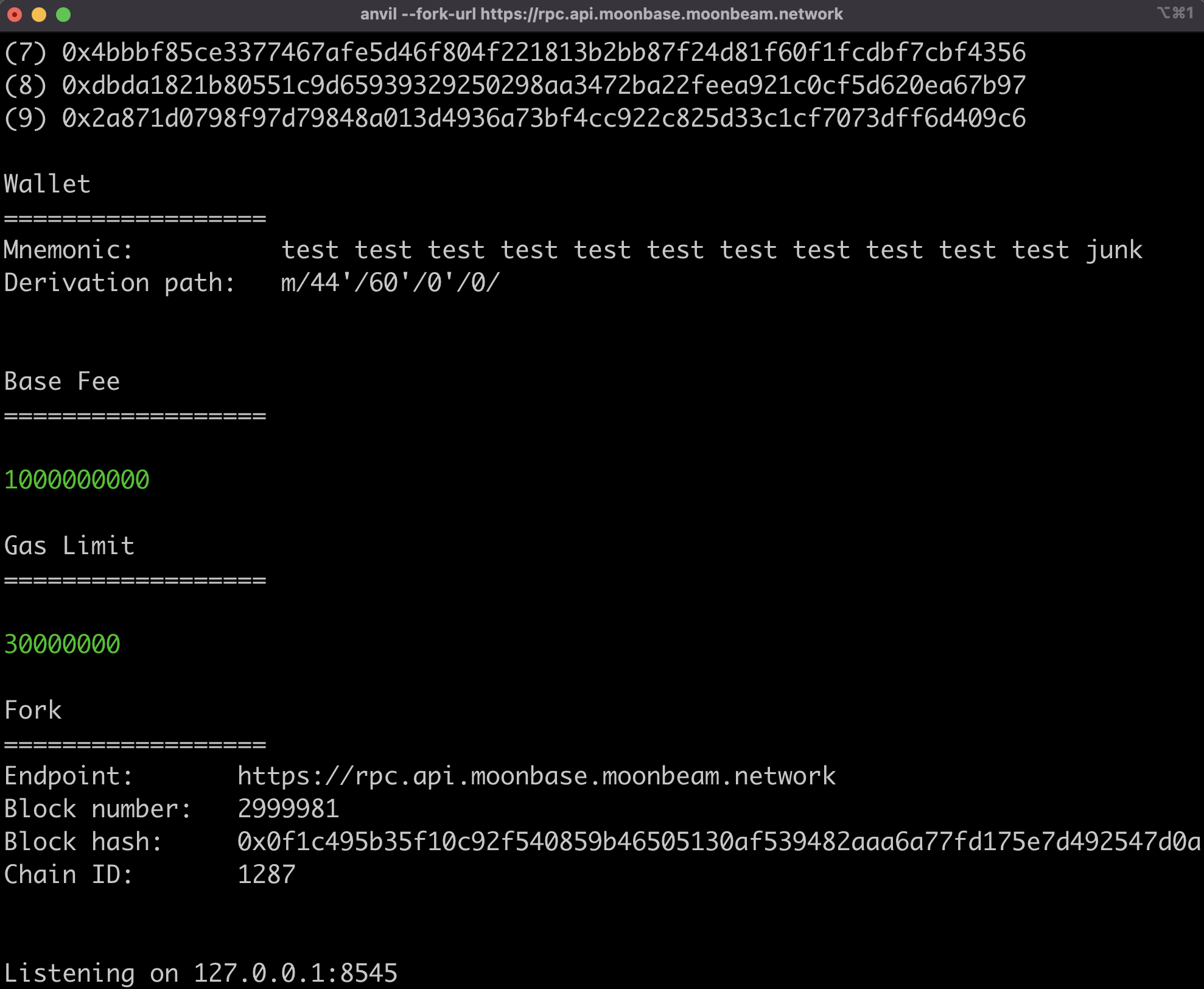 To verify you have forked the network, you can query the latest block number:

If you convert the result from hex to decimal, you should get the latest block number from the time you forked the network. You can cross reference the block number using a block explorer.

From here you can deploy new contracts to your forked instance of Moonbeam or interact with contracts already deployed. Building off of the previous example in this guide, you can make a call using Cast to check the balance of the minted MYTOK tokens in the account you deployed the contract with: