Using Brownie to Deploy To Moonbeam¶

Brownie is an Ethereum development environment that helps Python developers manage and automate the recurring tasks inherent to building smart contracts and DApps. Brownie can directly interact with Moonbeam's Ethereum API so it can also be used to deploy smart contracts on Moonbeam.

This guide will cover how to use Brownie to compile, deploy, and interact with Ethereum smart contracts on the Moonbase Alpha TestNet. This guide can also be adapted for Moonbeam, Moonriver, or Moonbeam development node.

To get started, you will need the following:

Your Brownie project should contain the following empty directories:

Another important file to note that is not included in an empty project is the brownie-config.yaml configuration file. The configuration file is optional and comes in handy when customizing specific settings such as a default network, compiler version and settings, and more.

To deploy to a Moonbeam-based network, you'll need to add and configure the network. Network configurations in Brownie are added from the command line. Brownie can be used with both development and live environments.

Moonbeam, Moonriver, and Moonbase Alpha are supported out of the box with Brownie as of version 1.18.2. To view the complete list of supported networks, you can run the following command: 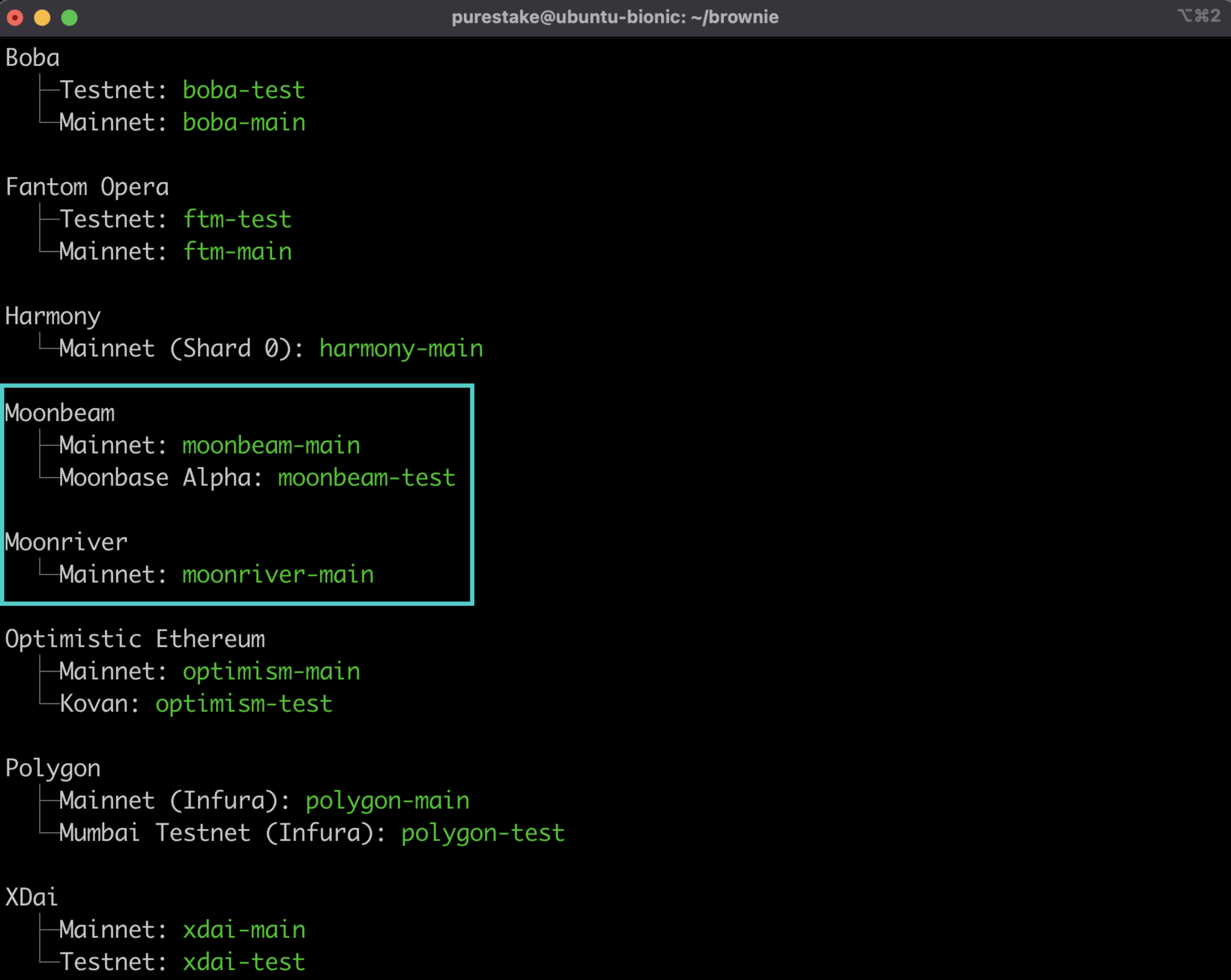 To add Moonbeam development node configurations, you can run the following command:

If you successfully added the network, you'll see a success message along with the network details in the terminal.

To deploy to a Moonbeam network, or run tests on a specific network, you can specify the network by appending the following to the given command:

If you would like to set a default network, you can do so by adding the following snippet to the brownie-config.yaml configuration file:

Keep in mind that the brownie-config.yaml file isn't automatically created, you can optionally create it yourself.

Before you can deploy a contract, you'll need to configure your account, which is also done from the command line. To add a new account you can run:

Make sure to replace {INSERT-ACCOUNT-NAME} with your name of choice. For this example, alice will be used as the account name.

Next you can create a contract inside of the contracts directory. The smart contract that you'll deploy as an example will be called Box, it will let you store a value that can be retrieved later. You can create a Box.sol contract by running the following command:

Open the file and add the following contract to it:

To compile the contract you can simply run:

The first time you compile your contracts it may take longer than usual while the solc binary is installed.

After compilation, you'll find the build artifacts in the build/contracts directory. The artifacts contain the bytecode and metadata of the contract, which are .json files. The build directory should already be in the .gitignore file but if it's not, it’s a good idea to add it there.

Your contracts will only be compiled again if Brownie notices that a change has been made. To force a new compilation, you can run:

In order to deploy the Box.sol smart contract, you will need to write a simple deployment script. You can create a new file under the scripts directory and name it deploy.py:

Next, you need to write your deployment script. To get started start, take the following steps:

You can now deploy the Box.sol contract using the run command and specifying the network:

After a few seconds, the contract is deployed, and you should see the address in the terminal.

Congratulations, your contract is live! Save the address, as you will use it to interact with this contract instance in the next step.

You can interact with contracts using the Brownie console for quick debugging and testing or you can also write a script to interact.

To interact with your newly deployed contract, you can launch the Brownie console by running:

The contract instance will automatically be accessible from the console. It will be wrapped in a ContractContainer which also enables you to deploy new contract instances. To access the deployed contract you can use Box[0]. To call the store method and set the value to 5, you can take the following steps:

The transaction will be signed by your account and broadcasted to the network. Now, you can retrieve the value by taking these steps:

You should see 5 or the value you have stored initially. 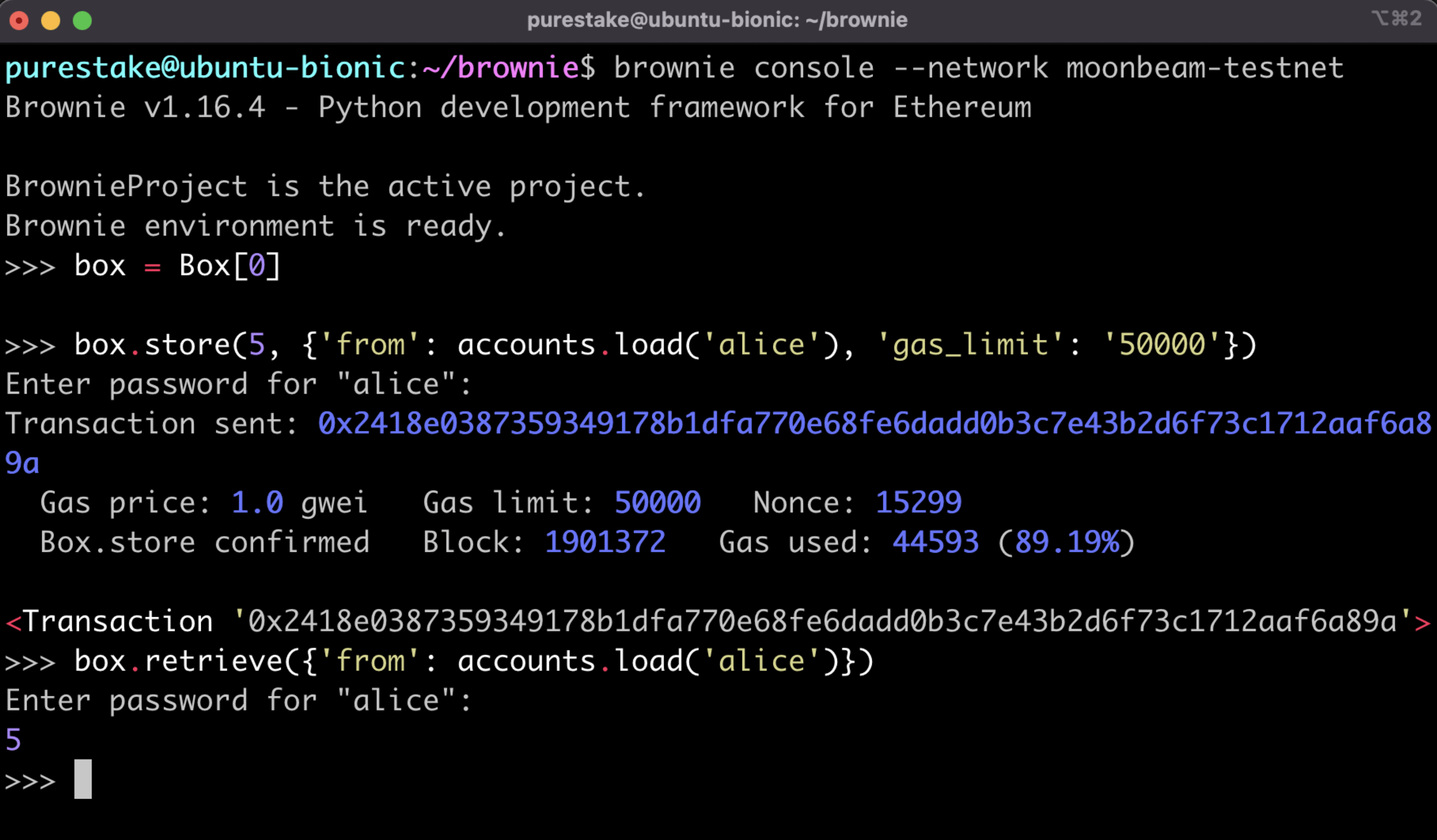 You can also write a script to interact with your newly deployed contract. To get started, you can create a new file in the scripts directory:

Next, you need to write your script that will store and then retrieve a value. To get started, take the following steps:

To run the script, you can use the following command:

Congratulations, you have successfully deployed and interacted with a contract using Brownie!